[Note: The following review contains spoilers for all aired episodes of Once Upon a Time, up to and including “The Tower”.] 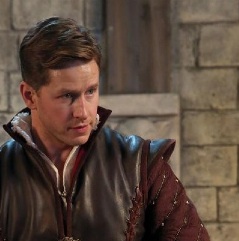 After the extremely rapid pacing of the past two episodes, “The Tower” slows down a bit to focus mainly on one character, Charming, and while some might find it a less worthy episode because of it, I appreciate that–even in the midst of so much plot unfolding–Once continues to take time to zero in on specific characters’ journeys, not losing their emotional arcs in favor of the Big Picture. This one is also particularly interesting to me because Charming is often depicted as the stalwart one, the rock when Snow is feeling overwhelmed or worried, and here we see him going through his own trepidation regarding being a father. Snow voiced similar concerns in the past over never having really gotten a chance to be a mother in the sense of raising a young child from a baby into early adulthood, and here we have her prince facing similar fears, only exacerbated by having lost his daughter a second time only recently, a neat twist on typical gender expectations, particularly in fairy tales.

In the opening sequence, Charming finds himself once more in Emma’s nursery, almost as it was when they were making their original plans for her arrival, complete with crystal unicorn mobile over the crib, except for the fact that the magic wardrobe is already there, a reminder of the impending tragedy and a first indication that this isn’t a flashback, something which is drawn into further relief when an adult Emma steps out a moment later in a ballgown, looking every inch the fairy tale princess she was originally intended to be. After a sweet father/daughter dance, however, Charming is reminded of the truth of what befell them all over again, when the wardrobe opens and sucks Emma into a vortex, a nightmarish image that’s directed gorgeously and with a genuinely eerie touch, with spinning dolls’ heads and the idyllic nursery being practically torn apart. Even more disquietingly, the dream is prophetic. Dream Emma had referred to her father having failed her and begged him not to fail the next one. A moment later, Snow awakens him with the news that she is pregnant. If the pregnancy is true, the impending doom could be, as well.

And so Charming makes a trip into the woods–of course, a powerful fairy tale metaphor–to find his courage, in the form of night root, which Robin Hood tells him can  help calm his fears, which must be causing him particular stress if he feels the need to resort to magical means (it also implies that this wasn’t his first nightmare about impending fatherhood). As it turns out, night root doesn’t work the way he had expected (magic, price, yadda yadda). Rather than simply quieting one’s fears, it actually causes a dark manifestation of one’s deepest fears to appear, which one can then physically vanquish. He discovers this through Rapunzel, of all people, who he finds up in her fabled tower, near the patch of night root.

Now, Rapunzel has always been one of my favorite fairy tales, and when I first heard that Once Upon a Time would be tackling it, I was very excited, particularly when I heard that they had cast an African-American actress in the role. As it so happens, however, their use of the character didn’t quite live up to my expectations. I was hoping for her story to be a bit more prominent and crucial. As it was, it had almost no relation to the original story or even to Disney’s version (other than her being transformed into a princess), and she really could have been any damsel in a tower. I did, however, like (a) the mash-up of Snow White’s prince being the one to encounter Rapunzel, and (b) the idea that Rapunzel actually unknowingly put herself into the tower, due to her own terror as to how her parents will react to her having unwittingly caused her brother’s death, and that part of her doesn’t want to leave, because she is too afraid to face her fears. The “witch” isn’t a dark mother figure but Rapunzel herself, scared of what her actual mother will think of her. (This also ironically foreshadows Charming for Zelena’s trap, because he unwittingly does it to himself.)

What I like about the use of the flashback most of all, however, is how it helps completely subvert viewer expectation as to what is going to happen in the modern-day story. Charming helping encourage this woman to face and ultimately vanquish her fears doesn’t only help Charming realize he can conquer his own fears without the night root but seems to set up a similarly triumphant story for Charming and his fears a year later when Zelena poisons his tea with it. And, just as Rapuzel defeated the hooded figure wearing her face, so does Charming defeat his…except there’s a twist: a moment after winning the fight, his sword–symbolically imbued with the courage it took him to fight himself–disappears into a cloud of green smoke, along with his actual courage.

I don’t think I have ever seen this sort of plot handled before in this way. Usually, a story about a hero facing his fears would end up with him getting over those fears by the end, due to the act of having fought them, whereas the brilliantly demented concept of this episode is that Zelena forcing Charming to fight a physical manifestation of his fears in order to regain his courage ironically causes him to lose it (a terrible Catch-22, as the nightmare version of him otherwise would have killed him), so we actually leave him in a worse position than he was at the start, and every single aspect of the episode before it, including his inspirational message to Rapunzel, was specifically designed to throw us off the trail, which is fantastic irony. Also, again, the episode finds our characters unknowingly retreading ground they had already tread in their year of lost memories. He otherwise would have instantly recognized the figure for what it was.