[Note: The following review contains spoilers for all aired episodes of Once Upon a Time, up to and including “Witch Hunt”.] 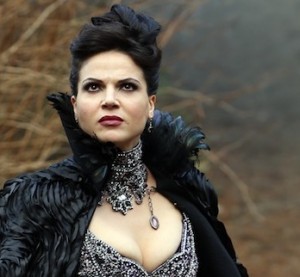 This very well might have been my favourite episode of Once Upon a Time ever made to date, and those of you who know how dearly I adore this show should realize that that’s really saying something. I guess this is what happens when you unite my favourite fantasy series with my favourite childhood story, and do it with such a wonderful sense of fun, imagination, near-perfect pacing, suspense, superior character development, and a seemingly never-ending cavalcade of deliciously hilarious one-liners. In other words, “Witch Hunt” was written by Jane Espenson.

Before going on to the episode’s deeper layers, I really cannot stress enough how amazing the jokes are. I don’t think I’ve ever laughed as many times during an episode of Once. The message-by-bird gag regarding Snow White alone is gutbustingly terrific, not to mention her “Banditry!” (Ginnifer Goodwin’s reading of this line made my sides practically split) as well as Whale’s “I’m a doctor, not a vet!,” but what really got me were all of the amazing Oz throwaways: Regina calling the Wicked Witch of the West “Greenie,” for example, and of course, her positively epic “Lollipop Guild” line. And then there’s that gobsmacking moment in which she turns a flying monkey into a stuffed animal.

Of course, later, in Storybrooke, we see a man turn into a flying monkey. I think what I may love most about Once Upon a Time is that it is the only show ever in which the sentence, “Dr. Frankenstein tried to heal Little John, but he couldn’t before Little John turned into a flying monkey and flew away, as Frankenstein, Prince Charming, Captain Hook, and Robin Hood looked on.” can be said, and it is an entirely accurate description of an actual scene that really happened.

What I love most about the Oz jokes is that, much earlier during the show’s run, the fairy tale characters weren’t aware that they were fairy tale characters and most of them only knew of people within their realm. Later on, though, we got hints that some of them were learning of more stories via the books they had read in Storybrooke. David mentioned knowing Alice in Wonderland, but only via our world. This, however, is the first time that they are back in the Enchanted Forest and dealing with characters from a story that they had thought was only a story, and likely the most famous one in American children’s literature, to boot. Just like us viewers, they know of the Wicked Witch and the particulars of Oz through pop culture exposure, which puts us all on the same footing with them, possibly for the first time ever, and makes the meta jokes land brilliantly.

Also, in keeping with the swift pace of revelations in this half-season, our characters in present-day Storybrooke suss out that it’s the Wicked Witch due to the same sort of deduction that they did one year ago. Flying Monkeys + Green Smoke = Wicked Witch! Now, granted, they still don’t know who the Wicked Witch is in Storybrooke, but I love that they got that far, and all due to their intelligence.

Now, speaking of swift revelations, we also got the intriguing news that the Wicked Witch, here called Zelena (Slavic for “green”!), is Regina’s half-sister, or so she claims–and, by the way, not until typing that out did I realize that “Regina” and “Zelena” rhyme; I love these evil writers so!–but in this case, I’m not sure if I trust her. For starters, the familial reveal happens so quickly and also seems so typical of Once that it instantly made me suspicious of it. They have used their own formula to trick us before, significantly in “The Miller’s Daughter,” when they temporarily teased that Regina might be Rumpelstiltskin’s child.

Then again, it’s also possible that they intend us to disbelieve this only to confirm later that it’s the truth. Her being the daughter of Cora and–I assume Rumple–makes sense emotionally, and there is of course the “green” issue (and the parallel that both she and Rumple have white skin in our world), although it’s difficult to figure out yet when in the timeline it could have happened. For now, however, my guess is that she simply wants Regina to believe that she’s her sister and that the way she broke through the unbreakable blood magic wasn’t through shared genetics but with the drop of Regina’s blood the monkey brought her in the previous episode. She could also be just a child of Rumple’s that even he might not know about. All of this, however, only makes the questions of her full motivations all the more intriguing. At the very least, I don’t believe for a moment that she’s telling anything nearly the whole truth. For now, though, watching Regina and her face off is a thing of beauty. Both Lana Parrilla and Rebecca Mader as Zelena seem to be having a ball playing off each other. The Evil Queen vs. the Wicked Witch: Best. Confrontation. Ever.

And just as Parrilla is nailing Regina’s comedic elements–how much do I love that she finds a new lease on life for herself due to having a new opponent to fight? It’s so very, very Regina–so is she doing superb work with the current tragedy in Regina’s life, namely the loss of Henry. Back in the Enchanted Forest, it makes complete sense that, just because Snow was able to talk her out of removing her heart, it doesn’t mean that she’s ready to live life again. Instead, she decides that, after lowering the magical shield to let the others into the castle–and it shows true growth that she does that first and doesn’t just plan on screwing them over–she will ironically place a sleeping curse on herself that can only be broken by her true love, Henry.

This is both heartbreaking and beautiful writing for numerous reasons. For one, she places the curse on a comb, which is a subtle reference to the original Snow White story, in which the Evil Queen tricks Snow White with a poisoned comb and a poisoned brooch before finally bringing out the apple, but even more important is the idea of the Evil Queen maturing from her earlier state, in which–in her bitterness and hatred–she wanted to punish everyone for her misfortunes, versus here, where she only plans to harm herself.

Furthermore, she isn’t necessarily planning on ending herself forever. There is the minor loophole that–although it’s extremely unlikely if not impossible, given not only her location but his lack of memories of her–Henry could one day wake her. This reasserts the series’ running theme that, unlike the classic fairy tales, the concept of “true love” on Once isn’t restricted to romance. It’s also a gorgeous mix of both fatalism and optimism. On the one hand, it doesn’t seem that Regina really thinks Henry will ever be able to break her spell. On the other, Snow and her undying faith in the people she loves has clearly gotten to Regina, because just leaving open the possibility, however near-impossible, that this could happen for her demonstrates enormous growth on Regina’s part.