[Note: The following review contains spoilers for all aired episodes of Once Upon a Time, up to and including “New York City Serenade”.] 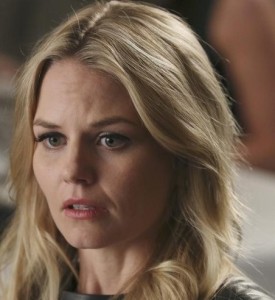 Once Upon a Time closed off the first half of its third season with one of the most remarkable episodes in its entire run–a mid-season finale that, up until its last scene, felt so conclusive, so definitive, so emotionally satisfying for practically every character arc that it could have very well been a series finale: Storybrooke was destroyed; all of the fairy tale characters returned to the Enchanted Forest from whence they came; Emma and Henry got the happy life together they had always hoped for, courtesy of a new set of memories free of the pain and confusion of their pasts thanks to a truly redemptive, heartbreaking act on Regina’s part…and then, with a knock on the door one year later, it all changed for Emma, when Hook appeared playing Doc Brown to Emma’s Marty at the end of Back to the Future, except instead of telling her she had to save her future kids, it’s her parents–the ones she no longer remembers she has–who need saving.

That finale astounded me, because it completely uprooted the entire makeup of the show up to that point, feeling like the end to the first chapter of the Once saga and the start of a whole new one. The concept had such immense potential, and yet I couldn’t quite see exactly where or how the show would proceed from that point. And I’m very happy to report that, if the mid-season premiere, “New York City Serenade” is any indication, so far, they seem to be doing everything right.

The episode impressed me for so many reasons, but what it mainly boils down to is how much was accomplished in this single hour and how much further, within its confines, Emma came in her journey than I ever imagined. Talk about hitting the ground running. I–along with, I’m sure, most viewers–expected the show to string out Emma learning and/or remembering the truth for quite a while, and yet, no, by about 2/3rds of the way through the episode, Emma regains all of her memories (the funny thing is that, in literal screentime–the end of last episode, and this one combined–Emma was only in her new state for maybe 30 minutes, and yet through economical writing and the actual time gap we as viewers have experienced, it really does feel much longer).

And while surprising, it also delighted me. Because we have already been through an entire season of Emma not believing or realizing the truth about magic, and part of me was a little worried that we were in for a retreading of a similar arc. I should have trusted the writers more. The nifty trick they play is that this version of Emma is remarkably similar to the one we know. She had also been through a miserable childhood in the foster care system and had been emotionally burned badly by Neal, and so she is recognizable as our Emma. She is similarly hesitant to trust people and to accept her universe being disturbed.

However, unlike “our” Emma, she also has spent the past 11 years raising Henry and being generally happy and content, which alone opens her up just that bit more to belief. Whenever she’s feeling a bit wary, she has Henry to help her see past her reticence–it does seem that she would’ve accepted Walsh’s proposal thanks to Henry, were it not for Hook’s interruption–and even to gently tease her a bit about her personality foibles (speaking of which, I love the easygoing relationship the two have here; it seems a very credible relationship from what we know of both characters, both of whom are different in some ways from the “originals” but also very much the same). That plus the fact that these memories are false–and it makes sense that somewhere, buried deep down, she might be able to sense it if she focused hard enough–make it easier for an audience member to accept her eventual willingness to listen to Hook and try the potion.

And there is also the fact that the writers very intelligently give Emma a solid reason to doubt her new memories, and that is Neal’s apartment, to which Hook very wisely sends her. There, she finds a camera of Henry’s, with his name on the strap, and even more importantly, photographs of Henry and her in Storybrooke. (One might question when, timeline-wise, this camera could have gotten to the apartment, but I’m willing to accept that either (a) when the Storybrooke spell was first broken, it perhaps redistributed the things of this world back to where they most closely belong and Neal’s apartment seems a good place, given that had the camera wound up with Emma and Henry, they could have learned the truth; or possibly more likely, (b) Hook nicked it from the new Storybrooke–judging from what we’ve seen so far of the Charmings’ aparment, it seems everyone’s possessions have reappeared where they originally were–and placed it in the apartment for her to find.) All of these factors come together to make Emma more willing to take that leap of faith and drink an unknown liquid from the vial of a stranger.