So in one tale, the son initially rebels against the father by promoting war, and in the other the son eventually rebels against the father (or at least the idea he has of a deceased father he never knew very well) by trying to prevent it. Their arcs are both similar to one another and inverse at the same time, due to the conflicting leanings of their fathers, though I think an argument can be made that Odin and Howard are more similar than not. Howard is actually less interested in creating tools of destruction than he is in creating the World of Tomorrow, full of scientific wonders–significantly, some of which eventually come to be inspired by Odin’s technology/magic–although his company ultimately ended up leaning more towards weapons creation than he probably would’ve liked. And as Tony learns in the second film, he was also more aware of his failings than his son ever realized. Ultimately, he actually did hope his real legacy would be realized through his son creating that new world that the science of his time held him back from ever accomplishing, and so in “rebelling,” Tony ends up fulfilling his father’s dreams. Similarly, after disappointing his father mightily, Thor ends up changing and eventually proving himself worthy–which is also what Odin had always intended by banishing him: to send this headstrong youth out into the world without his powers so that he could learn humility and ultimately return a more mature, worthy successor. Speaking of which, Tony similarly finds himself in a harsh, unfriendly environment without his “powers”–his money, his labs, etc.–yet also finds his way to being the hero he had always had the potential to become. 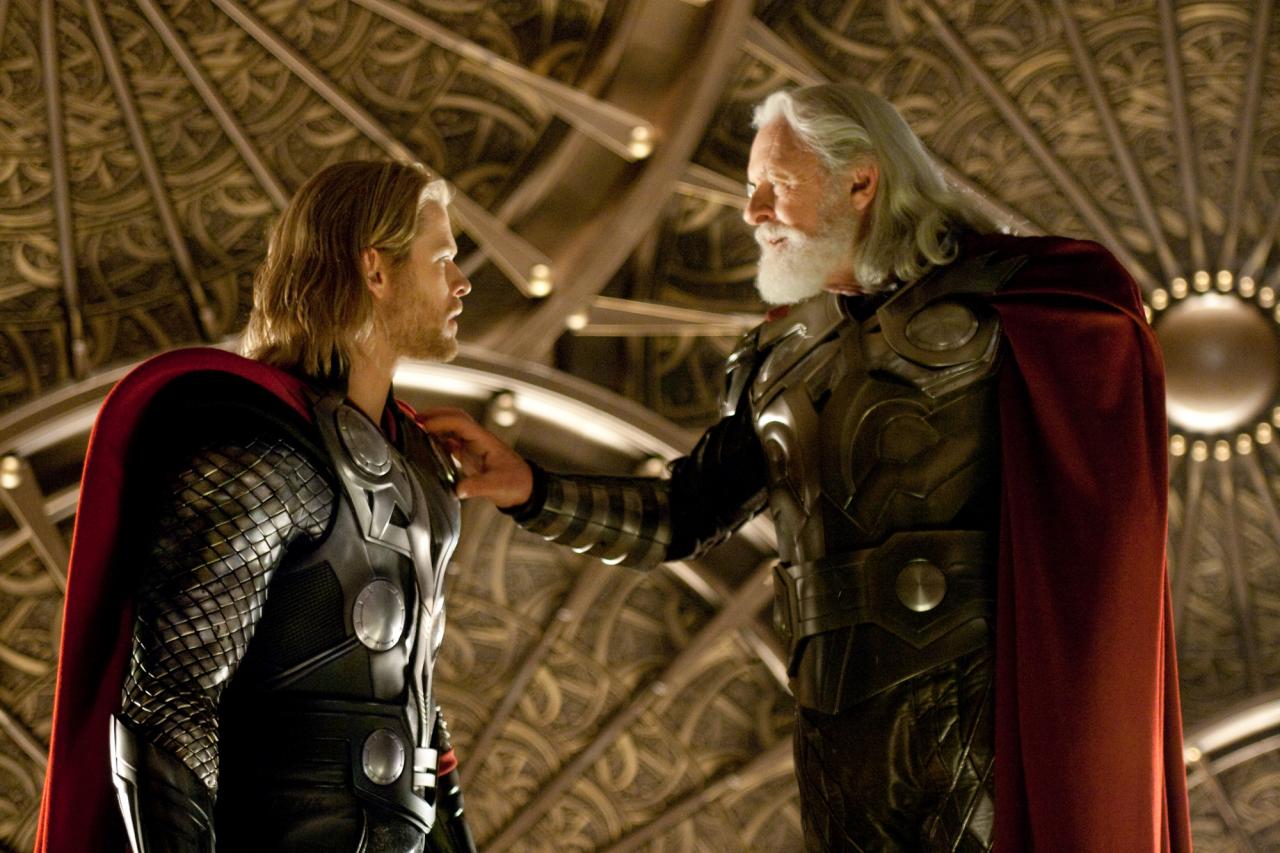 This film also interestingly shows us S.H.I.E.L.D. from a complete outsider’s perspective, for the first time. In earlier films, although Stark wasn’t officially affiliated with S.H.I.E.L.D., he had spent his life doing work for the military and had experience with this sort of agency. Due to Tony’s often childish behavior, one could easily find oneself siding with the S.H.I.E.L.D. agents in the Iron Man films, particularly Coulson, because they often seemed to be the voices of reason against Tony’s bad behavior. In Thor, we view S.H.I.E.L.D., for the majority of the film, in a far less complimentary light. From Jane’s POV, they are the Big Bad Government Guys who swoop in and confiscate all of Jane’s research, yes in the name of protecting the country/planet/what-have-you, but in a manner that seems thoroughly unjust, nonetheless. A viewer who had never seen a previous Marvel film or read a comic and had no context for who these guys were would have no reason for not just thinking them total assholes at the start, until indications of Coulson’s better nature appear later in the film. This accomplishes the neat trick of both establishing that S.H.I.E.L.D. does at times perform morally questionable acts in service of what they consider to be the greater good, which we may not realize from the earlier films alone–thus setting up an important thread in Avengers of Fury, et al. sometimes having to be the “bad guy” so that our heroes can remain generally pure–while at the same time reiterating that their intentions are essentially good. It also gives us a brief introduction to Hawkeye, who will appear in The Avengers.

And, of course, Thor‘s mythic/magical/cosmic bend also continues the series’ gradual move from the mostly realistic world of the Iron Man films to the more flamboyantly out-there aspects of comic book continuity. Marvel eased us in at the start and acclimated us to these ideas so that we’d be able to accept things such as the Asgardian technology that shows up in Captain America, the alien invasion in The Avengers and the full-on space opera of the upcoming Guardians of the Galaxy.

Thor is a different sort of comic book film. It isn’t about an average person who becomes “super”. It isn’t even about a “super” person raised on Earth by human parents. It is about a thoroughly alien protagonist who should be completely unapproachable and unrelatable to us puny mortals. And yet, over the course of his story, we do come to be acquainted with the man beneath the Ren-Faire-on-steroids garb and to understand him. This might be Branagh’s greatest talent as a director–the skill to take characters who dress strangely and speak in heightened forms and thus could not seem any less relevant to our day-to-day lives, and to then show us why we should care. How underneath all of the theatre and pomp, our emotions are very much the same.