There is also a surprising amount of complexity and genuine emotion in the Asgardian family plot. Anthony Hopkins’ Odin and Tom Hiddleston’s Loki may play to the rafters, in faux-Shakespearean fashion–and Hemsworth does, as well, while in Asgard– but at the same time, their drives, their hurt, their pain feel real. This is what happens when material that could be outrageously camp is given to great actors and a great director, who can navigate the perilous waters of the theatrical and ensure that the material never drifts to the negative side of that connotation. Part of this is due to the sharp delineation between Asgard and Our World. We can accept the mythically heightened, theatrical emotions in Asgard (not to mention its sheer, jawdroppingly gorgeous fantasy vistas and scope), because the sequences set in Our World consistently bring them down to earth (no pun intended) (actually, scratch that, pun intended).

Furthermore, once Loki’s malice is revealed, things are still not as simple as they seem. There are machinations within machinations here, and even the “bad guy” with his double and triple crosses does actually kind of have a point, in some regards. We can understand why he is the way he is, and he isn’t all together wrong. Thor would have been a terrible, perhaps even disastrous king were he to have taken the throne at the start of the film, and if it weren’t for Loki’s actions–as awful and deceitful as they might have been–and Thor’s subsequent experiences on Earth, he likely never would have changed. With that said, it’s not as if Loki’s intentions are fully pure at the start. They also spring from jealousy towards an elder brother who, from his perspective, always seemed to garner deeper affection from his parents than they ever held towards him. One can sympathize with that and with his feelings of betrayal, when he later learns the truth of his parentage, which to him only further confirms why his parents never fully treated him as one of their own (again, from his perspective, not from theirs).

The film also doesn’t instantly launch him into Big Bad status but allows him to arrive at his villainy in increments. At the beginning, all he wants is to prevent his brother from taking the throne. But then a rush of huge, unexpected emotional upheavals occur for him in short succession: he learns that he is actually a Frost Giant; his father lapses into a coma, largely as a result of the stress of the argument they have over this revelation; he is suddenly granted the throne and all the power he may have never even realized he had craved so badly. 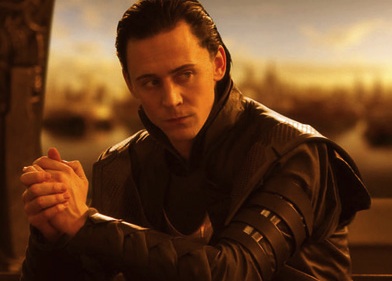 And though he clearly still does love his father, mother, and brother on some level–even when he is attempting to destroy the entire Frost Giant race, he expects his adopted family to see it as a gesture of love for them, rather than deeply troubling–he is so full of anger and bitter loathing at that point that he probably doesn’t even fully understand himself at that point. Throughout the film’s central portion, he directs his attacks outwards at his brother, the golden boy who he never thought he could live up to, but the person he really hates most is himself, to the point that he wants to wipe out the entire race from which he came in order to legitimize his place in his Asgardian family. This is Shakespearean-level tragedy. He is King Lear‘s Edmund, Goneril, and Regan all rolled into one.

And if he is Edmund, Goneril, and Regan, Thor is Cordelia, the favored child who displeases the aged parent, thus invoking his wrath. Now, this parallel doesn’t work perfectly, given that Cordelia is kind and pure, whereas Thor starts the story as somewhat of an impetuous ass, but it works in spirit. He is similarly cast out and stripped off his birthright for failing to live up to what was expected of him. Thor’s relationship with his father also finds another parallel in the Marvel Cinematic Universe, in the form of the Starks. Speaking of which, it is no coincidence that each of the title-character Avengers parallels Tony Stark on some level. He really is the glue that holds the Phase One story together, on many levels. More on that in the Avengers review. But for now, what’s interesting is that Thor and Tony are both cocky, arrogant, and extremely powerful sons who each begin their stories trying to make their fathers proud in some way, Thor in wanting to maintain the glory of Asgard and Tony in doing the same for Stark Industries. But as the story proceeds, each comes to fundamentally clash with his father, albeit in Tony’s case, it’s a posthumous clash over what his dad’s work represents to him. In both cases, however, it is over the same issue: war.

Although known for being a mighty warrior in his younger days, Odin has grown to view it as a sometimes-necessary evil that must be avoided whenever possible, due to the cost of life. It is far better, in his mind, to prevent the necessity for violence in the first place. It is certainly nothing that he would actively seek out. The youthful Thor, however, doesn’t yet have the wisdom of his father and only sees the valor and majesty of war, as well as the chance to prove himself and, by extension, his people (or at least that’s what he tells himself) as bold and indestructible. He sees his father’s reticence to fight as a betrayal. Interestingly, when it comes to the Starks, this philosophical divide isn’t only flipped the other way around but based completely on the son’s perceptions. Tony has been creating weapons of war for years, just as his father did. It’s the legacy that Howard, who even helped work on the Atomic Bomb, left for him, but when Tony is confronted head-on with the horrors of war for the first time, he changes positions and decides that the production of weapons must stop all together. In many ways, it’s a rebellion against his father, whether or not his dad truly liked war vs. simply liked the money he made off of it, never taking the steps his son did to attempt to prevent it. As Tony boastfully and preemptively claims in Iron Man 2, he believes that he has “privatized world peace.”