And so let’s begin at the beginning, with Iron Man.

When this first film in the saga originally came out, it stood out amongst its comic book film peers by being unlike anything we’d ever seen in the past from the genre. True, Christopher Nolan’s Batman films had already helped imbue the genre with a legitimacy it had been lacking in the public mindset in the past, but it was still ultimately a traditional superhero story, operating under the archetypal hero-with-a-secret-identity framework. They also took themselves so seriously, they often traded in typical superhero fun for dark artistry. Iron Man, however, was able to capture a real-world edge while also delivering a whizzbang good time. And while that stunning final moment in which Tony Stark throws out the rulebook and boldly proclaims, “I am Iron Man!” to the world can never pack the exact same punch it did on subsequent viewings as it did that first time, it is still audacious and wonderful and makes Iron Man the perfect launching point for Marvel’s vast comic book crossover epic. 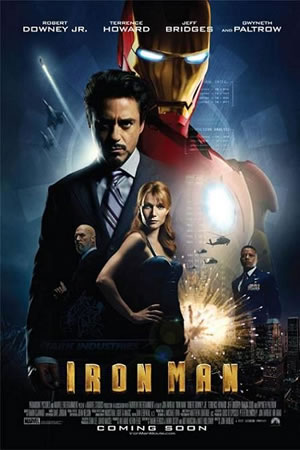 Because it boldly states, “We know what you’ve come to expect from superhero films in the past, but we are doing things differently.” And that idea will continue to reverberate throughout the series, which takes characters from left-of-center–from those who most people know of but the average person doesn’t actually know much about such as Captain America and Thor to those who are fairly well-known but have never been captured well on film before, such as Captain America, again, and the Hulk, to ones that very few outside of comics fandom knows, such as Black Widow and Hawkeye, to those such as Iron Man, who wasn’t quite a household name in the past but which some comics laymen might have heard of, in passing–and makes them prominent in modern pop culture superhero knowledge, alongside Superman, Batman, Wonder Woman, Spider-Man, etc. Furthermore, none of these characters has the sort of classic superhero arc that we’ve come to expect from earlier films in the genre. Captain America comes the closest, but even his story has significant departures from the norm, which I’ll discuss when we get to his film, not to mention the fact that he springs from a jingoistic background that one would have thought would have been difficult to translate to a modern cinematic context. Suffice it to say that the Avengers in the Marvel Cinematic Universe are a collection of more oddball, almost outsider superheroes, which makes them feel strangely relatable and easy to root for, which is impressive given that there are few if any of us who could actually relate to a billionaire genius playboy, a gamma-ray-enhanced Jekyll/Hyde, a literal god, what have you.

Speaking of literal gods, the first Iron Man also works as an excellent introduction point into this universe because it begins in such a straightforward, real-world manner, its prologue shot in a very stripped-down, near-documentary-style that wouldn’t feel out of place in any Middle Eastern-set war film. That truly brilliant opening sequence establishes a great deal in a brief amount of time. Besides setting up Tony Stark’s character, it also establishes the world of the film as authentic and modern-day, and lays the groundwork for the plot of the entire film in microcosm. We begin with a bunch of soldiers in a humvee with Stark in Afghanistan (very timely, that), all of them basically relaxed, chatting, cracking jokes, enjoying their few minutes with a celebrity. And then BAM! an explosion smashes into them and this environment that seemed (but only seemed) hermetically sealed and safe suddenly erupts into hell, with every single other member of the vehicle killed in quick succession (and this scene works so well because, on a first viewing, you are at first laughing along with the group and then shocked, just like Tony is, while on later viewings, those happier, opening moments become tragic, as one watches, knowing what is about to happen, that all of these jovial people are about to be dead, and there is nothing that can be done to stop it). Stark is thrust from a happy, congenial social gathering into fire and death, as his illusions about being untouchable, about war itself being a bit of a lark, easily won if you have your fingers on the right military toys, are shattered in an instant. And then the cruel punchline, when he has just enough time to read his only company logo, his own name–on the rocket that, a moment later, nearly blows him to smithereens, its shrapnel forever lodging itself in his heart. From now on, he will literally walk the rest of his life with Stark weaponry surrounding his heart, which he will then come to shield (see what I did there?) with a different sort of Stark technology that he now hopes his true legacy will be.