Inside the Warehouse: A Conversation with Drew Z. Greenberg

Home » Fireside Chats » Inside the Warehouse: A Conversation with Drew Z. Greenberg

[Note: The following article contains MAJOR SPOILERS for already-aired episodes of the fourth season of Warehouse 13.]

As you might have guessed, we at Dreampunk.me are huge fans of Warehouse 13, so were extremely excited when one of our favorite TV writers, Drew Z. Greenberg, executive producer and writer on the show–who has also written for other favorites of ours including Buffy the Vampire Slayer, Firefly, Queer as Folk, The O.C., and Dexter–graciously agreed to sit down for a chat with us, on the eve of the mid-season finale of Warehouse 13‘s fourth season. Given the tumultuous events of last week’s episode, “The Ones You Love,” we were especially eager to discover what the show might have in store for us tonight and in the future…

Drew Z. Greenberg: Ha! It’s true, if you do not ask this kind of question, the Society of North American Warehouse Thirteen Reporters (SNAWTR) takes away your card. So I understand completely.

The process by which we come up with artifacts is such a group effort, I don’t know that I could point to any particular artifact and say, “I came up with that one.”

I’m more likely to remember the stuff that other people came up with. For instance, I’m still partial to the Studio 54 disco ball from “Duped.” I thought that was a nice shot of whimsy right alongside the actual scary. And from a story-telling perspective, I like what we got out of Lizzie Borden’s compact: the idea that it was so dangerous but also revealed that Kelly loved Pete was ironic and sweet and sad all at once. And of course… the metronome. The metronome was just badass.

DP: Back on the Season 1 DVD set, I believe you revealed that you got to keep Rheticus’ compass after “Claudia” was done filming. Do writers still get to keep their artifact props and if so, do you own your favorite artifact of yours (and what is it), assuming it isn’t still the compass? 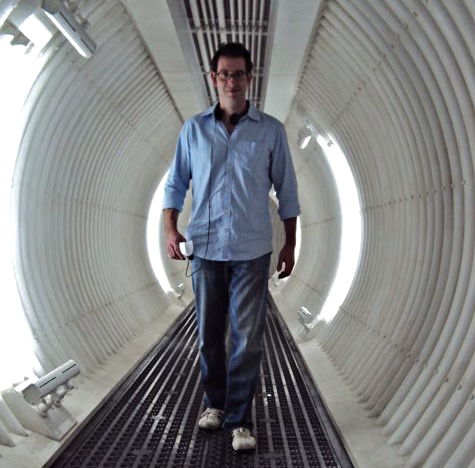 DZG: Jack Kenny, our showrunner, is very good about arranging to have the writers get an artifact from their own episodes when it’s possible. But with just a few exceptions, we pretty much just get one each – those props are pretty valuable, and the truth is, you never know when we’ll need them again. So I treasure my Rheticus Compass dearly, and I’m grateful to have it. It’s absolutely the coolest prop anyway – I don’t need any others.

DP: “Warehouse 13” has some of the best continuity I’ve seen on any series, with such great callbacks. For example, MacPherson’s watch. As writers, did you guys always know how exactly that would come into play again or was how specifically that would feature in the plot again up in the air? In general, how in advance is the series arced?

DZG: It actually varies – sometimes we know precisely how and when things will be showing up again, sometimes we just know we want it to show up again, and we leave ourselves room to do it and then stay on the lookout for the chance. MacPherson’s watch was a good example of the latter: we knew we weren’t done with MacPherson and his legacy, so we left room for the watch to come back. Then we stayed vigilant, watching for the place to use it. We knew fairly early on in Season 3 that the Warehouse would blow up at the end of the season, and at that point we all felt it would be great irony if MacPherson ended up helping Artie in what would surely be Artie’s greatest moment of crisis. So we just wrote to that beat of MacPherson’s gift helping Artie, knowing it was coming.

In general, personally, I’m a big believer in knowing where the season is going to end before it starts – a notion that was reinforced during my years with Joss. It’s why I’m so happy that on Warehouse we always have the season ending – or some version of the ending – on the board before we sit down to talk details about Episode One. That doesn’t mean we have every beat of the ending worked out at that point. It’s important to see where the story is taking you and let it organically dictate the most resonant ending. In Season One, for instance, we knew someone was going to be caught in the umbilicus when it blew at the end, and we actually had a few versions of that ending on the table as we wrote that season. But once MacPherson came into focus, and his relationship with Artie proved to be so rich and meaningful, it became clear that the only person MacPherson could take out was Artie. No one else made sense. The story, as it developed, told us what the details had to be.

The process works as well as it does because of the writers we have working on this staff: Jack Kenny, Nell Scovell, Holly Harold, Diego Gutierrez, Bob Goodman, Deric Hughes, Ben Raab, Ian Stokes, JP Nickel and Michael Jones-Morales (plus our script coordinator Ian Maddox and writers’ assistant Marque Franklin-Williams who wrote an episode in the back ten).  They’re all extraordinary, and they make the day-to-day routine of sitting in one room for eight hours at a time thoroughly enjoyable.