After continuing our journey with John Crichton last week with “Self-Inflicted Wounds,” Parts 1 and 2, our Farscape re-watch continues this week with the fifth and sixth episodes of Season 3. 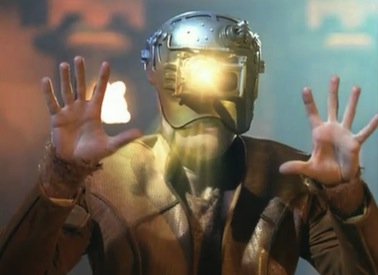 The first episode after a major character leaves a series always leaves writers with a difficult situation. Narratively, you don’t necessarily want to spend an entire episode on the characters grieving (although, interestingly, the Farscape writers will do that later this season in “The Choice,” after one of the Crichtons dies, which is likely another reason they chose to not do that here), but you also don’t want them to simply jump onto their next adventure without acknowledging the pain they’re all going through. “…Different Destinations” is a near-perfect solution to this issue. Although it has its own standalone story, the characters are all still very much in a state of shock and mourning over Zhaan’s death, which casts a shadow on the entire episode. Even when her name isn’t directly being brought up, all of the characters’ emotions and decisions throughout the hour are driven by this underlying pain, producing what is arguably the darkest episode of Farscape up to this point, and possibly the darkest in its entire run, although “The Choice” is certainly a runner-up.

In the typical time travel story, characters are sent back in time and accidentally screw up the timeline by performing some small action that inadvertently alters the flow of history, and from that point forwards do whatever they can to get the past as they know it back on track. And besides some minor variations here and there, they generally manage to set things right. As Harvey tells John, “All modern research points to the elasticity of time rather than a brittle framework…If nudged closely enough to course, events have a way of restructuring themselves. If the participants are the same, the venue’s the same, the motivation’s the same, then, well, the outcome is likely to be the same.” And this certainly stands to reason, again, given what we know of time travel stories throughout pop culture. And this is what Crichton chooses to believe and holds to, but as events unfold, no matter what John does to attempt to restore history–each step of which should have theoretically worked–things only get worse and worse. From the moment Aeryn, D’Argo, Stark, Jool, and his presence interrupted history, it became completely frelled, and there is seemingly nothing any of them can do to get it back.

Thematically, this is a reflection of what happened with Zhaan. She is gone, irreversibly, and nothing can be done to change that. Furthermore, the outcome of her death and other recent sadness aboard Moya can be traced to actions of the other crew members, all of whom likely blame themselves in different ways–the “self-inflicted wounds” after which the previous two-parter is named. Whereas in those episodes, however, the wounds were the result of selfish motivations on various characters’ parts, in this episode, Crichton in particular goes out of his way to not screw up and yet these good intentions are ultimately useless, or at least it feels that way to him. He and his friends do ultimately manage to save the planet from the destruction it nearly suffered due to their initial actions but at the cost of innocent lives. In a way, this reflects Zhaan’s death, too, in its bittersweetness. Good is accomplished but at great cost, just as Zhaan’s sacrifice was uplifting and triumphant even as it was heartbreaking. And in many ways, this is even more devastating, as the nurses and children who die here were helpless in the face of the Horde and had trusted Crichton to protect them, and he had honestly believed that he had. In some ways, this can feel like an incredibly bleak message for Crichton to process.

There is a flip-side, however, which is that it also indirectly indicates that he shouldn’t blame himself for Zhaan’s death. Sometimes, bad things happen and you can go on second-guessing and blaming yourself for your actions every step of the way, but the fact of the matter is that it’s no one’s fault. Crichton arguably fails in this episode because he tries to take the entire burden on himself, and fights so hard to control the situation. It’s possible that had he simply let things be after the initial interruption or at least shared his initial plan to reconstruct the original conditions with the other people that it could have sorted itself out. On the one hand, there is a crushing futility to this episode–a brilliant hour but difficult to watch because of it–but on the other, I don’t think its ultimate message is that no matter what you do, the world sucks, even though it might feel like that in the micro. Instead, it is that the world can suck and sometimes you’re not going to score an unqualified win, and you have to learn to accept that, and, in the words of John’s grandmother, wait for the wheel.

John and Co. are suffering through an incredibly dark time at the moment and they are as helpless to save the nurses and children as they were to save Zhaan but that doesn’t mean that happy days won’t come again. But it can’t be forced. This is not the time for a happy, optimistic Farscape episode. Instead, it is time for one that demonstrates that sometimes things are entirely out of our control. John couldn’t possibly have known that attempting to console Stark would have accidentally caused all of this. When they first landed on this planet to sightsee and found this peace memorial, it seemed like the perfect balm for their wounds. There are even special goggles that allow you to peer through a literal crack in time and witness with your own eyes the moment 500 cycles ago when enemies laid down arms, the leonine Horde discovering that there were no soldiers but only nurses and children left at the fortress, and so sparing their lives and forged peace with them. And John innocently hopes to help Stark by showing him this lovely scene as well. “No, it’s okay. It’s a moment of peace. It’s the very thing Zhaan treasured most.” However, the irony is that, from the very moment that Stark puts on the goggles, he sees the nurses being slaughtered–the new timeline–meaning the very act of trying to make him feel better sets the nurses’ deaths in motion, and the pain he feels from seeing it catapults everyone through the crack in time in order to cause that horrific outcome. If blame must be pointed anywhere, the tragedy that transpires is arguably more Stark’s fault than Crichton’s. His currently bleak outlook and refusal to be consoled basically turns his glimpse of the past into a self-fulfilling prophecy. Whereas everyone else sees hope, he sees destruction and death.

From that point on, however, Crichton attempts to take over the situation, which certainly worsens it. He doesn’t cause the initial problem, which is the fact that the first time the Horde attacks since they arrive, they end up capturing Grynes, the very Venek general who was supposed to return to his people, report that there were only women and children left and therefore work out the peace accord. Now, however, not only is Grynes being held prisoner but the presence of John and Co. means that there aren’t only women and children there now. Still, John manages to convince him to go back to his people with a peace proposal, but doesn’t tell anyone else, let alone the nurses. Instead, he attempts to help smuggle Venek out by dressing him up in the garments of a nurse. Just as Venek’s about to leave and fix everything, however, one of the nurses, Kelsa, notices what John is doing and shoots Grynes in the heart, instantly killing him, belying any notion that just because they aren’t soldiers and are female means that they are weak-willed. And the most frustrating thing about it is that, from Kelsa’s perspective, her actions make full sense. She doesn’t know these new people here and isn’t yet ready to trust them, so of course when she sees one of them trying to sneak out their prisoner and return him to his army, her first impulse is to think that he is betraying them. Had John been at all forthcoming, this might not have happened. And so, in one way, Kelsa sealed their doom here, but Crichton was arguably more at fault for, again, trying to take all matters into his own hands, likely as the result of feeling it was his sole responsibility, just as he feels it was his fault that the events of “Self-Inflicted Wounds” transpired the way it did.