After continuing our journey with John Crichton last week with “Season of Death” and “Suns and Lovers,” our Farscape re-watch continues this week with the third and fourth episodes of Season 3. 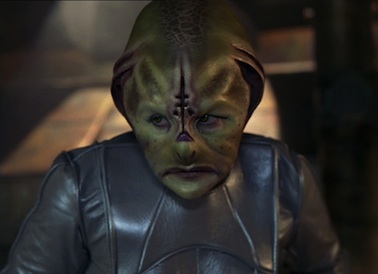 From the title, “Self-Inflicted Wounds,” one might think that everything bad that occurs in this two-parter springs entirely from the characters’ faults. Significantly, however, this is only partially true. In it, a wormhole-traversing ship full of an advanced alien race known as the Pathfinders collides with Moya as they are emerging from a nearby wormhole. The ship literally gets embedded inside Moya, nearly killing our poor Leviathan–who is still recovering from being severely burned–all over again. The Pathfinders’ ship is actually capable of phasing out of our dimension, and it was still “regaining dimensionality” when it hit Moya so it has essentially recorporealized within her, its pole-shaped edges skewering her and causing her great pain. Furthermore, the collision caused Moya and this other ship to effectively become trapped within the walls of the wormhole, and the only way to separate is to perform a maneuver using the density of the wormhole wall that will only allow one to survive. As Pathfinder Neeyala describes, “One vessel slides into the wormhole core, maintaining a chance of enduring. The other tumbles uncontrolled through the wormhole wall into normal space to be atomized by differentials in speed and density.”

Returning to the name, one might expect it to imply that the events that lead to these dire straits are entirely Crichton’s fault, due to his obsession with wormholes and the fact that in the past–particularly in “Till the Blood Runs Clear”–he had thoughtlessly and selfishly put his friends in danger whilst trying to chase one. This, however, isn’t the exact same situation. The Pathfinder ship actually comes out of nowhere and crashes into them before John is even able to fully process what is happening. That doesn’t, however, fully absolve him of any culpability. Even though Zhaan has grown extremely weak and they are frustratingly right near a planet that can restore her, the second Crichton hears the word, “wormhole,” he tells Pilot to wait and to allow him to take some readings. Moments before, his only concern was Zhaan and suddenly he acts as if she can wait a few minutes. But she can’t, and an instant later, the Pathfinder ship appears. Now, Pilot actually brought Moya up near the wormhole before Crichton even realized, anticipating his interest in it, and so John isn’t to blame for their position, and additionally, it’s possible that–given how quickly it all goes down–they couldn’t have gotten out of the way in time anyway, but there is a small chance they could have. But I believe the show leaves that ambiguity in there deliberately, because in the end, whether or not they could have avoided this situation had John reacted seconds faster than he did, the troubling aspect is how, if only for a split second, his dying friend became less important to him than the wormhole.

And it only gets worse from there. Throughout the episode, John will prove to be the only one of Moya’s crew who instantly trusts Neeyala and her people. Everyone else is wisely suspicious of their motives and agendas, but Crichton defends them, seemingly because on some level he so wants them to have benevolent purposes and to perhaps be able to gain knowledge from them that can lead him to Earth that he goes above and beyond in giving them the benefit of the doubt. He is so desperate for them to help him that he justifies their behavior to himself. This even goes so far as to, despite himself, consider the possibility of letting Moya die so that the ship with all of its scientific data can be preserved. Now, granted, he also justifies this to himself due to the very real possibility that it’s already too late to save Moya. After all, she had been horribly damaged only recently and, while still healing and not fully back on her feet, now she’s had this other setback, making it fully possible that she wouldn’t be able to survive the separation and/or the wormhole, meaning they could die either way and at least if they choose Neeyala’s ship they have a better chance of getting out alive and with all of the scientific information it holds. Zhaan, however, is horrified by this argument. From her perspective, as long as there is any chance of saving Moya and Pilot, they must take it, which is a beautiful evolution of her character and relationship with Pilot. Early on in the series, particularly in “DNA Mad Scientist,” she thought of Pilot simply as a servicer, and the two of them effectively as her servants. But over the course of their time together and their bonding, culminating in Kaheynu placing Moya in her care, she has now come to see herself as their servant and protector.

From one perspective, John’s behavior here is actually quite horrifying. Even merely considering saving data over saving his friends, even momentarily thinking of her as just a ship shows again that the danger of him evolving into the Future Crichton from “My Three Crichtons” who valued science and his own survival over friendship, isn’t as far removed from the realm of possibility as he and we might have hoped. As a contrast to his behavior, Chiana falls into Zhaan’s arms, crying, due to her extreme guilt over the part of herself that wants to survive, despite the fact that it might mean abandoning Moya and Pilot. But that isn’t to say that John has grown completely hard, callous, or unfeeling. He feels guilt over it, as well. He even calls Harvey out of the trash bin to debate the issue with him. It could be argued that he does so only because he knows that Harvey will tell him what he wants to hear, namely justification for abandoning Moya, but just the fact that he seeks the Scorpy clone’s opinion is a clear indication that he actually realizes that he’s in the wrong but isn’t ready to accept it. If he wanted to be talked out of his position, he would have gone to Aeryn.

And the other thing is that Harvey isn’t entirely wrong. Moya doesn’t necessarily have the strongest chance of survival, whereas Neeyala’s ship could potentially help John get home, but the old John would likely have grasped onto even that small chance and would have deemed anything less as unacceptable. His time with Harvey has darkened his outlook. Having Scorpy’s personality inside him for so long has likely whittled away at his identity to some degree, or at least cast a shadow over it, sometimes making it harder to hear the angels of his better nature. On the other hand, he did practically jump into that unstable wormhole in Season 1, only thinking of Aeryn’s safety afterwards, so it’s not as if that capacity for selfishness wasn’t there. But this all goes to show how complex the Farscape characters are. John isn’t by any means a bad person. But he is a person. And that sometimes means behaving selfishly or in his own self-interest. In this case, it might not necessarily have caused the dire predicament they find themselves in, but contemplating what they should do about it certainly has exposed an ugly side to him that probably no one is as ashamed of as he is himself (Browder plays this subtext underneath John’s arguments, throughout), even if he isn’t yet ready to admit it.