After continuing our journey with John Crichton last week with “A Clockwork Nebari” and “Liars, Guns, and Money,” Part I, our Farscape re-watch continues this week with the twentieth and twenty-first episodes of Season 2. 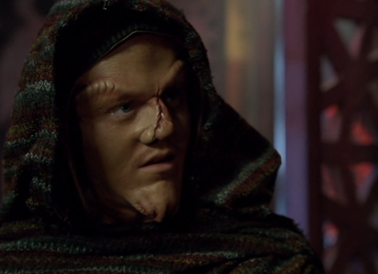 “Liars, Guns & Money, Part II: With Friends Like These…”

In many ways, the second hour of “Liars, Guns, and Money” is the most ambitious episode of Farscape up to this point. Particularly in terms of narrative scope, it is absolutely enormous, not only as far as the hugely dramatic things that happen in it but in how many disparate elements from previous stories come into play here. In addition to catering to and significantly advancing two of the series’ most prominent arcs to date–namely, Scorpius’ obsession with John, and D’Argo’s quest to reunite with his son, Jothee–it also features some almost unbearably high-stakes drama regarding Moya, as her life is put in more extreme danger than ever before and as a direct result of her crew’s actions, albeit ones that were done with the best of intentions, along with the return of more seemingly one-shot characters from earlier episodes than ever before. Numerous people from season 1 standalones who we may have never expected to see again, and certainly not all in the same episode, come together in a way that really shows off just how dense and populated this fictional universe has become, all of the bits of worldbuilding from the previous 42 episodes seeming to come to a head, and humorously, excitingly, gloriously so. Why, Rygel even manages to finish off his archnemesis in the blink of an eye, as a deliberately throwaway gag in a story already bursting at the seams. “With Friends Like These” is a perfect snapshot of a show that has truly come into its own, dramatically, creatively, imaginatively, showing off all of its many wonders, its humor, its heart, as well as its sense of operatic grandeur.

As I mentioned at the end of the last episode, we discover in this one that all of the gang’s efforts in “A Not So Simple Plan” are revealed to have basically been for nought, and furthermore to have caused significant harm, since what they had thought were valuable ingots were actually metal-eating bugs who are now beginning to devour Moya from the inside out. Even before this discovery, however, all of the risks they took are undermined at the start with the discovery that Scorpius is still alive (so they didn’t even accomplish that) and has beaten D’Argo to the auction and purchased the lot of slaves that Jothee was a part of. What is even more horrifying, though, is when John realizes that it’s actually Stark’s fault. After linking into the Shadow Depository’s systems, he had forgotten to break the connection between it and his console, which allowed Scorpy to trace it back, learn about their plans, make the connection regarding Jothee, and purchase the boy with the express purpose of ransoming his life for Crichton. Scorpius also–to Stark’s horror and agony–kills all of the 9,999 Bannik slaves who he was forced to purchase along with Jothee, for they are nothing to him–as sure a sign as any of Scorpy’s coldhearted ruthlessness, despite any good intentions he might actually have regarding fighting the Scarrans, because even that is mainly motivated by hatred. He hates the Scarrans because a Scarran raped his mother (as is finally confirmed here) and so seeks to harm them in return, which means that while his efforts to get wormhole technology may indeed benefit the galaxy, Scorpy’s agenda is not pure, no matter what he might tell himself. He could have simply set the other slaves free if he didn’t need them. He chose to kill them instead.

Despite Stark being the one who had failed to break the link–which likely occurred as a result of how much he had begun to freak out when things started to go wrong–D’Argo continues, however, to place the blame for what happened squarely on John, because Stark isn’t his best friend and so doesn’t owe the same debt to him, so to speak. If John had simply agreed to help him break into the bank earlier, they could have been in and gone before Scorpy had even gotten there, he argues. Which is legitimately unfair, since there is no way to tell if things could have possibly gone any smoother or faster had that happened. It was still a remarkably dangerous plan that they couldn’t necessarily have completed before he arrived, if they were even successful at all. In a deleted scene on the DVD, D’Argo additionally blames him for not having killed Scorpius when he had the chance, which is a bit more reasonable to be angry about, if also not something that anyone could have predicted (putting aside John’s literal inability to do it for a moment). What it really comes down to, however, is D’Argo’s sense that Crichton had betrayed him by not instantly backing him up, and so he’s treating him as a scapegoat–understandable, given that Scorpy is using his son as a pawn in order to manipulate him into surrendering Crichton to him and would have no interest in D’Argo or his son were it not for his friendship with John, and that on some level, D’Argo is probably trying to justify to himself the possibility of giving up Crichton.

Luckily, however, despite a vision of Jothee appearing to him and blaming him for choosing his friend over him, D’Argo doesn’t give in to these feelings, although he does admit to Chiana that part of him wanted to, and he’s desperately ashamed of it. Anthony Simcoe is absolutely superb in this episode. Ever since the people aboard Moya have developed into a family, their interpersonal relationships aren’t nearly as volatile as they were in the first season, in which everyone had significant trust issues. If D’Argo were faced with this sort of choice around the time of “DNA Mad Scientist,” he likely would have gone through with it without blinking, but things have changed for all of them. However, Simcoe truly nails what an impossible test this is for D’Argo, because while he knows that he would not be truly worthy of his son if he handed his best friend on a platter to a madman who wants to dissect his brain, by not turning John over to him, he puts Jothee’s life at risk. The tears which seep out of his eyes and run down his cheeks, dampening his beard, are so incredibly powerful because they help further the illusion that D’Argo is a fully real being. We don’t see a human in bizarre alien make-up, but a real, flesh-and-blood Luxan, crying real tears for his son and for the impossible situation into which he has been thrust. If he felt a measure of self-hatred in “The Ugly Truth” for having been so distrusting of Stark, despite him only wanting to help him free his son, imagine how conflicted he must feel now, with his son and best friends’ lives on the line.