After continuing our journey with John Crichton last week with “Won’t Get Fooled Again,” our Farscape re-watch continues this week with the sixteenth and seventeenth episodes of Season 2. 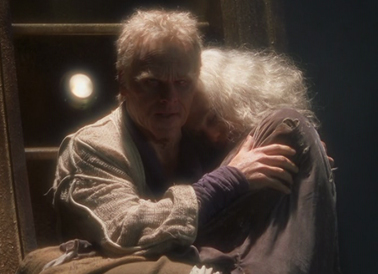 Of all of the episodes of Farscape, “The Locket” might be the most simply beautiful and overtly romantic in the series’ entire run, which is ironic compared to how romance is usually depicted on film, as the couple at the heart of the story–John and Aeryn–live out a lifetime together seemingly without having sex once in that time span. Instead, it is represented as a deep, lasting friendship. Furthermore, for the bulk of the episode, they both look physically ancient. This is love in its purest form, a tale of two souls who are meant for one another, completely separate from such mortal confines as physicality. It is both awe-inspiring and heartbreaking in its unbridled emotion, and for me one of the best examples of how Farscape used sci-fi genre tropes as frameworks in order to explore complex human psychology without an overwhelming concern for scientific accuracy.

Many, more literal-minded viewers have picked apart this episode based on the potential inconsistencies of its time travel rules, and yet that is entirely missing the point. Farscape is and always has been more science-fantasy than science-fiction. If you’re focusing on the science of it, you wouldn’t even be able to accept a living ship that was created by gods made of steam. The time travel/paradox concept here functions as a manner in which to tell a fascinating standalone short story and to explore John and Aeryn’s relationship and as individual characters in an entirely new light. As usual, handwaving away the technobabble is a Farscape trademark.

This episode has been most compared to Star Trek: The Next Generation‘s “The Inner Light,” a beautiful, bittersweet hour in which a probe transmits the consciousness of an iron weaver on a doomed planet into the mind of Capt. Picard, who in the space of half an hour or so lives through many decades of that man’s life in seeming real time, an experience that leaves him with memories of a lifetime he had never lived but which feels just as real to him as if he had. While that one is brilliant in its own right, however, “The Locket” has a very different purpose and trajectory. For one, John and Aeryn emerge from the episode with no memory of what had occurred other than the vaguely disquieting feeling that something had happened between them that they can’t put their fingers on, and so instead of being a story that affects the characters, it’s more one that speaks to aspects of the characters of which even they are unaware, and which unbeknownst to them sets the tone for the future course of their arcs.

Furthermore, these are the real John and Aeryn, so rather than a protagonist coming to identify with another person whose life he perhaps could have had, had the circumstances of his own life been entirely different, it’s more of a what-if? scenario that extrapolates a potential future for these people we know from who they are today. Also, whereas Picard experiences a rich, full existence, surrounded by loved ones and friends, Aeryn loses most people who she had grown to love before the episode even starts (which is so Farscape), and Crichton never finds happiness in the 55 years he spends on the planet (also very Farscape, in its dark, trope-twisting glory).

But here’s the basic gist of the episode: Moya travels into a strange stellar mist in order to escape Peacekeeper detection, and Aeryn goes ahead in one of her transport pods to investigate. After a day with no contact, she finally returns but, to everyone’s shock and dismay, is now an old woman of 165 cycles. She claims to have lived a lifetime, to have married, and given birth to three sons, all three of whom and her husband are now dead, and to currently have one remaining relative, a granddaughter, and although no one believes her, thinking the mist might have rapidly aged her and given her false memories, Crichton learns she is telling the truth upon following her down to the planet, meeting her granddaughter, and getting stuck there with her as well for another 55 cycles.

The mist that Moya is stuck in–as the newly-returned Stark describes–is apparently a  “Center Halo…where all dimensions…[meet] and where time…[ceases] to exist”. In other words, it isn’t that time was speeding up for Aeryn and then John but that Moya and everyone aboard her were the ones stuck in time, while John and Aeryn had emerged from the Center Halo in a small, seemingly closed-off system of planets (closed-off in the sense that they’re in the middle of nowhere and seemingly without space travel other than the transport pod, which can’t travel that far) in an entirely different dimension that was running at the proper pace. The only times that Aeryn and John have a chance of getting through to Moya are when temporary holes form in the mist, allowing them to reach their friends, but that possibility only occurs once every 55 cycles.

And so basically what happens to John is similar but the reverse of what happened to him in “Premiere” (and it’s no coincidence this happens the week after “Won’t Get Fooled Again”): he once again winds up screwed by a space/time anomaly, seemingly forever cut off from his friends and loved ones, only this time, instead of being shot to a completely alien, practically endless area of space, he instead winds up effectively stuck on a mundane, Earth-like planet where he spends five and a half decades of boredom and misery, wishing he could get back to space, which is probably the strongest indication we have had so far that Earth is no longer big enough to contain him. As much as Crichton speaks about wanting to get back home, if he returned to Earth today with no chance of ever traveling the cosmos again, he probably would be nearly as miserable as he is here. Now, there is a difference, namely that on Earth, he at least has friends and loved ones, whereas here, he only really has Aeryn and her granddaughter, but the larger issue seems to be that he knows that there are endless worlds to explore out there that are now completely, frustratingly out of his reach.

When Aeryn asks him why he can’t just accept his fate here, he responds, “I ain’t a gardener. I never wanted to be one. It’s all we do around here…garden, plant things…I was a pilot, Aeryn. An astronaut. I was what I wanted to be. I ain’t gonna forget that and I can’t accept this.” And this is very telling, shining a light on an aspect of John I’d never really thought of before really examining the line on this viewing, which is that it points to the idea that John, without realizing it at first, actually was living the life he’d always dreamed of aboard Moya, without ever fully appreciating it until he lost it.