After continuing our journey with John Crichton last week with “Look at the Princess,” Parts I and II, our Farscape re-watch continues this week with the thirteenth and fourteenth episodes of Season 2. 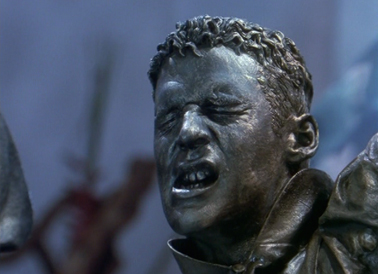 “Look at the Princess, Part III: The Maltese Crichton”

The final chapter of the “Look at the Princess” trilogy begins with one of the wackiest scenarios in Farscape history–which, at the same time, is played completely straight, which makes it even better–and ends on one of the most emotionally devastating gut punches to Crichton to date, which is a pretty perfect encapsulation of the show’s formidable ability to blend tones, weaving low comedy and high drama with genuine, complex emotions into a flawless space opera tapestry. Not many shows have the confidence to operate on as many levels at once as Farscape, which can shift effortlessly from funny, dramatic, silly, tragic, whimsical, suspenseful, and back again, and sometimes managing all of these tones at once. It knows exactly how to keep audiences on their toes. Unlike other sci-fi shows, in which we can generally tell from the start whether we are in for a more comedic or a more dramatic episode, Farscape sets up these expectations and then subverts them over and over again.

After all of the heavy trauma that Crichton suffered in “I Do, I Think,” the last thing that one might expect is a nimble, almost-caper of an opening to the next episode, and yet that’s exactly what we get. At the same time, it’s also fairly horrifying. At the moment that Cargn decapitates John with a laser, we as audience members don’t know how the human statues’ physiology works so we’re probably pretty shocked that first time, particularly since the opening scene has established that Crichton is conscious inside there. We can be reasonably certain that he can be brought back somehow, since he’s the star of the show–and as Clavor later tells Cargn, “Each cell is self-encapsulated. As long as the parts stay in their metallized state, he can be reconstituted”–but it certainly seems pretty dire, particularly when they then toss the head into a vat of acid. What I love about Farscape is how it embraces the ridiculous yet also manages to present it so legitimately that we accept it. From an outsider’s perspective, the concept of how the statue technology works and that John’s disembodied head can still be conscious while it’s floating in acid might be laughable–particularly to the more snooty sci-fi fans–yet in the context of the series, we are completely sold. Once you’ve accepted elements such as living ships with gods who imbue them with souls, conscious statue heads aren’t so difficult a leap. Also, we care about John so much that we are genuinely worried even while at the same time inwardly smiling at the show’s wonderful audacity.

For a short time, the episode then turns into a game of “Pass the Head”. Scorpy retrieves it from the acid after Cargn and Clavor leave. He notes having sampled Crichton’s DNA when he was in the Aurora Chair, which helped him track him, which might only be a partial truth. I wouldn’t be surprised if a signal from the neural clone might’ve helped as well, although it’s possible that it was neutralized by the statue process. Either way, it again hints at more having happened in the Chair than Crichton or we were immediately privy to, with another enormous clue in that regard appearing in Crichton and Scorpy’s final scene together in the episode. For now, however, Scorpius is triumphant, having retrieved the only part of Crichton that truly concerns him–his head. After all, all he needs is Crichton’s brain. The rest is immaterial to him. But then a second later, out of the blue, BAM! Scorpy is shot down and John’s head is taken again, this time by Jena, Clavor’s duplicitous PK spy fiancee. As with the decapitation, this is extremely jarring stuff the first time. In the moment, we don’t know that Scorpy isn’t dead. For a little while, we wonder, “Did Farscape really just dispatch with its major villain completely out of the blue like that?” And this being Farscape, it is actually a legitimate question. And even though we later learn that he was just tranquilized, it’s the first time we’ve ever seen Scorpius in such a vulnerable position, confirming that he isn’t supernatural or all-powerful and can be hurt like anyone else.

And even once he’s with Jena, Crichton isn’t immediately safe. At first, she seems to want to help him. She brings his head back to the rest of him and returns him to his original state with the statue machine, and the two of them flee. However, she of course has her own agenda, and furthermore discovers he isn’t Sebacean while reconstituting him so considers him a potential threat, holding a sharpened stiletto to his neck until he tells her the full truth. Things are never easy for poor Crichton.

Meanwhile, as long as Crichton is missing, the Empress has the entire planet on lockdown and furthermore threatens to execute every off-worlder. Since any one of them might have had a hand in kidnapping her son-in-law, from her perspective, it’s simpler to kill all of them. This threat becomes even more dire when Cargn kills Clavor, due to a mixture of his mounting paranoia about Scorpius and Crichton and his realization that he’s lost control of the situation and Clavor–a move that only worsens the situation for everyone, himself included. If you thought the Empress was hellbent on executing everyone before, just imagine what happens when her son is killed. And whereas Clavor only gets worse from that point onwards, it actually inspires a temporary albeit uneasy alliance to form between Scorpius and D’Argo, both of whom have a vested interest in locating Crichton (D’Argo because he’s his friend, Scorpius for the wormhole knowledge) and saving their own necks in the process. What no one could have foreseen at this point, though, is how this early instance of these enemies working together towards a common goal would come to foreshadow later times that Scorpy would ally with them, most significantly in the final season, when he actually becomes one of Moya’s regular passengers.

Another thing that happens that you rarely see in this sort of story: when Cargn tortures D’Argo in order to uncover Crichton’s location–he still believes Crichton is a spy working with Scorpy against him, completely misinterpreting both their relationship and Scorpy’s interest in John–D’Argo actually implicates Chiana, albeit not fully intentionally. We’re so used to seeing our heroes hold out against any form of torture that it’s shocking to see one throw the villain onto the scent of someone who is not only one of his friends but his sexual partner. At the same time, however, no one blames D’Argo, least of all Chiana, and we never see him blame himself, which seems to imply that they understand the duress he was under at the time and can forgive him for his self-preservation instincts while suffering such agony. At the time, D’Argo was also hoping that he could protect himself in the short term and then reach Chiana before Cargn could get his hands on her.