After continuing our journey with John Crichton last week with “Mind the Baby” and “Vitas Mortis,” our Farscape re-watch continues this week with the third and fourth episodes of Season 2. 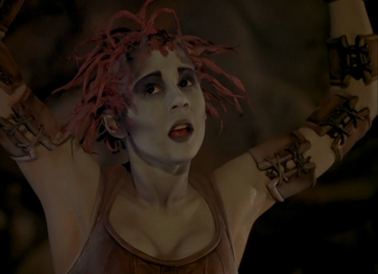 As I said in the previous review, the first half of Farcape‘s second season contains a number of episodes that zero in on one or two particular characters amongst the ensemble, either dealing with their pasts or delving further into their character journeys. After last week’s D’Argo-centric episode, “Vitas Mortis,” this time around, it’s Chiana’s turn, and just as D’Argo’s story featured themes of life and death–specifically a character trying to escape her own death and experience life for the first time in ages, nearly threatening Moya’s life in the process–so does Chiana’s, but in her case, her attempt to live life to the fullest doesn’t have the potential to hurt anyone (at least physically) but herself, as it is ironically tied to an action that could very well prove suicidal.

At the start of the episode, Chiana needs to speak to John, but he rather callously shoots her down because he’s doing some work on Moya’s systems. Whether this is at least partially due to what has been going on in his head lately, if he’s just so intensely focused on his work at the moment that he doesn’t take the time to notice she really needs him, or if he is underestimating the importance of the situation because she rarely tends to be serious isn’t ever fully explained, although I wouldn’t be surprised if it were a combination of the above, particularly given the fact that, this season, John often will seem to be caught between his genuine desire to help his friends with an increasingly standoffish attitude of which he doesn’t yet realize the full cause. On a first viewing, it seems to still be due to the effect of the Aurora Chair on his psyche, and by this point, it’s understandable why some viewers were starting to grow frustrated with him at this point in its original run: they missed the wide-eyed, innocent John and didn’t realize that his behavior was actually indicative of an external influence (well, technically an externally manipulated internal influence).

That’s why this season plays better for me on subsequent viewings–as does most of Farscape–because so many further layers that were planned far in advance become apparent. The first time, someone may not realize the full significance of John asking Aeryn at the end if she thinks he seems as if he’s starting to go a little crazy. It might alert a perceptive viewer to the fact that the writers were aware that John’s behavior was a bit off, and that it was deliberate (a less perceptive viewer might not notice this one line as being significant at all), but it still feels more an outgrowth of his earlier torture and what being on the run for so long has done to him rather than an indication that a different sort of torture is still going on, of which he is unaware. On a rewatch, one realizes that it’s no coincidence that the first appearance of the Scorpy inside Crichton’s head–who he comes to dub “Harvey”–occurs in the very next episode.

On a first viewing, one might also interpret Crichton’s question to Aeryn as being more due to prolonged exposure to the surreal, disorientingly nightmarish atmosphere of the cemetery planet on which the episode is set, along with its strange tribe of painted youths who either jump to their deaths at the age of 22 or succumb to a strange disease, and to the incredibly, literally trippy, drug-induced sequence in which Crichton eats one of the lobes of the four-headed mushroom, one of which on each is lethal, ostensibly in order to save Chiana’s life. However, he still chose to eat it, putting his own life in unnecessary risk, when there could have been a better, less dangerous way to deal with the situation. His behavior at that point, though, mostly springs out of guilt for ignoring Chiana’s initial cry for help when she needed him most.

What had been upsetting her was that the Life Disc that had, up to that point, indelibly connected her with her beloved brother, Neary, no matter how far apart they were in terms of physical distance, had ceased to function, indicating that he had died. And although in the later episode, “A Clockwork Nebari,” she will come to discover that he is alive after all, at this point she has no way of knowing that, and although this episode doesn’t delve as deeply into Chiana’s past nor relationship with her brother as it could have, Neary’s importance to her is conveyed beautifully through her grief. Gigi Edgley does an enormous job with the material, managing to convey how hard his death has hit Chiana while at the same time remaining very much in keeping with her character. In many ways, the process of mourning has made her even more defiantly rebellious and reckless than ever. Not many actors would make the choice that she makes in Chiana’s heart-to-heart with Aeryn–their first, which is significant, given they are two characters who hadn’t previously connected and more often than not got on each other’s nerves–to laugh when revealing that she had lost her brother, but the way she does it, it rings with such emotional honesty. She’s laughing while discussing the loss of the closest person in her life in order to avoid crying. She’s the type of person who has trouble accepting the emotional toll of grief so instead tries to replace it with a rush of adventure, to remind herself that she’s alive.