After continuing our journey with John Crichton last week with the season 1 finale, “Family Ties,” our Farscape re-watch continues this week with the first two episodes of Season 2. 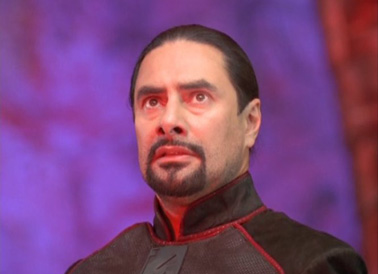 Before we begin this one, first a little background: “Mind the Baby” wasn’t actually always meant to be the second season premiere of Farscape. An episode called “Re: Union” was originally meant to precede it, in which we learn that Zhaan, Chiana, Rygel, and Pilot have spent the past 20 solar days searching for their friends and Talyn, at which point they land on the legally-minded planet of Litagara, Zhaan starts to go mad, is framed for murder, is put on trial, and eventually chooses to rejoin the Seek. If this plot sounds familiar to you, it is because the episode, which had been filmed, was later turned into a flashback episode through the use of a new framing device, retitled “Dream a Little Dream,” and placed 7 episodes later into the season. The reason for the shift is that the then-SciFi-Channel worried about viewers feeling cheated and upset by the immediate cliffhanger of what happened to Crichton, D’Argo, and Aeryn not being resolved the first week back after they’d already waited so long to find out what happened to them. This is why, when you first watch “Mind the Baby,” there seems to be a storytelling gap regarding the people aboard Moya. Because there is.

I actually have mixed feelings about SciFi’s ruling. On the one hand, I actually do understand where they were coming from and do think it is possible that the mostly standalone Litagara plot could have angered some people. And as it plays, there’s something I sort of like about the disorientation of not knowing exactly what happened with Zhaan since we saw her last, and how that information is then filled in later. On the other hand, details such as Zhaan’s initial mistaken belief that Crichton and the others are either spirits or figments of her imagination would have made more sense on a first viewing had we known that she had been seeing visions of the three of them prior to this point. And furthermore, I love the audacity of the concept of not resolving a life-or-death cliffhanger in the first episode back. It’s a very Farscape move, and I’d like to think that a large portion of the fans would have begrudgingly and even respectfully embraced it for its cheekiness, if for nothing else. I’ve always found the opening episodes of season 4 to be a deliberate reaction to the mandate regarding this one, because by that point, when Farscape was ten times more complex than it is even at this stage, SciFi seemed to have given up on this level of micromanaging, and actually let them get away with taking until episode 5 of the season to reveal everyone’s post-season-3-cliffhanger fates, and even with that, there were still questions that lingered.

Returning to the episode at hand, even putting aside the postponed installment, “Mind the Baby” makes the unconventional choice of skipping a little ahead in time. Rather than depicting Aeryn eventually rescuing Crichton and D’Argo, we pick up with the two of them in an abandoned mining facility on an asteroid on which she has left them. For the past few weeks, D’Argo has been unconscious and Aeryn has been bringing them what food and water she can, since with the PK patrol still in the area and only limited places with breathable atmosphere, it’s easier for her to go on food runs herself, particularly given D’Argo’s current state and that only two can fit in the Prowler. Or at least that’s her excuse. It isn’t long before we learn that Aeryn is keeping something from them, which is that Crais and Talyn are still in the area. As soon as Moya left, Talyn had actually started freaking out and refusing to obey Crais, and so Crais contacted Aeryn with a proposal: he gave her the location of this oxygen-filled asteroid to take Crichton and D’Argo in exchange for her agreeing to help calm Talyn down and learn to follow his orders, or as John will later put it, “Oh, all right, makes sense. You’re helping Talyn obey the guy who KIDNAPPED HIM.”

The revelation of Aeryn’s reasoning is one of the major aspects that makes the episode’s structuring work so well. By not revealing the full details surrounding the rescue right away, the first we realize something beyond what meets the eye is going on here is when we first see Crais contact Aeryn, a scene that truly throws the viewers for a loop the first time around. While we know Aeryn enough at this point to be reasonably sure that she wouldn’t betray her friends, we don’t yet know any details of this deal other than that the two are somehow conspiring in secret and Aeryn doesn’t want John to know, which puts the friends at odds with one another again–having the characters come in conflict, even after they became family, being one of Farscape‘s major recurring themes.

Of course, in truth, she only did what she did in order to save the lives of her friends, including Talyn, who would have been caught by the PKs had Aeryn not helped get him under control. However, it’s a Catch-22 situation. Naturally, John and D’Argo (when he finally awakens) are both furious when they learn the truth and with good reason, but Aeryn really had no other viable choice. Even had she let John and D’Argo die, it wouldn’t have helped Talyn. I also believe that, the way Aeryn sees it, at least this enables her to remain in Talyn’s life, maintaining the bond they began and hopefully keeping him open to her influence as well. At the same time, Aeryn clearly knows that what she’s doing isn’t fully on the up-and-up, and as a result, she acts much more coldly towards the two of them than usual, not even seeming particularly happy to see that D’Argo has recovered. Her guilt is causing her to push them away, which in turn makes them realize she isn’t being fully honest with them.

Meanwhile, poor Talyn doesn’t know what to think. As I’ve mentioned in the past, he’s a confused kid with a major identity crisis, just as initially unsure of how to trust as any of Moya’s crew were in the first season. And to paraphrase Aeryn from earlier, he has so many different voices in his head. He has Crais, trying to instill in him the code of a PK warrior, even whilst telling him he must avoid other PKs, because they are awful and cruel (meaning he wants Talyn to be a soldier but to only really owe allegiance to him), and even going so far as to tell him that his mother “abandoned” him, which is an infuriating bit of manipulation on his part, given he is the one who took Talyn away from her. He has Aeryn, who acts genuinely consoling towards him and who seems to understand him to some degree but who also probably doesn’t seem as close to the sort of figure he was bred to emulate as Crais is. Further, she is a connection to his mother, who he both loves but also has trouble trusting in equal measure due to their encoded genetic differences. Even while he wants to be with his mother, his instincts are also telling him that he is a warrior, which she will never be nor understand.