The episode also fascinatingly both increases the PK threat as a whole while also continuing to insist on humanizing individual Peacekeepers. Although, officially, the Uncharted Territories are outside of PK jurisdiction, “Thank God It’s Friday…Again” gave us our first indication that they do have a possibly-off-the-books presence there apart from Crais. The discovery of the Zelbinion was another oddity. By all rights, it likely shouldn’t have been there in the first place. In all previous instances in which Moya’s passengers actually crossed paths with a PK, however, they were part of Crais’ crew–which itself was ordered back to PK space. This is the first time, therefore, that Crichton and Co. get solid proof that not only are PK black-ops missions happening out here but even a new secret military base has been built. And this black-ops mission’s intent is to capture an extremely deadly virus so that the Peacekeepers can weaponize it.

So, to reiterate: the Peacekeeper force is getting even bolder and scarier at this point. But, at the same time, on a personal level, the show doesn’t depict any of the people in this episode as monsters (Durka is arguably the only PK monster we’ve met yet, Crais being unhinged but emotionally understandable.). Larraq and his team are all just people–military people with jobs to do and Sebacean chips on their shoulders, sure–but people, nonetheless. Underneath his PK arrogance, Larraq actually doesn’t seem to be a bad bloke. He’s personable, charming, and seems to be someone whose better nature could have flourished were he raised under different circumstances. The reason Aeryn finds herself falling for Larraq a bit (again reiterating that John and Aeryn’s sex in “A Human Reaction” doesn’t mean they’re a couple now; Aeryn is nowhere near emotionally ready for that at this point) is that he reminds her of home, a home that might be perceived as evil to the people who they oppress but, in the day-to-day experience of a soldier indoctrinated into this life at birth, is just normal. And that’s the thing. The average PK isn’t evil in the comic-book sense. Aeryn wasn’t evil before meeting John. She genuinely thought she was following the right course in life.

But back to Larraq, Aeryn couldn’t identify as strongly with Gilina, because she was a tech, but Larraq is a soldier like her, albeit a less disciplined, regimented one than she’s used to, and ironically someone she likely would have looked down on back in the day because of it, as with her attitude towards Gilina. But she has changed. (And, interestingly, his line to Aeryn that she should consider joining black-ops actually foreshadows her decision to do just that at the end of Season 3.) The irony is that, in the end, Larraq does end up becoming an all-out villain, and one who nearly kills her, however it’s only indirectly due to being a Peacekeeper inasmuch as it is the reason he brought the virus on board in the first place. Everything he does at that point is completely controlled by the virus.

The final scene is an interesting echo of when John took care of Aeryn when she was suffering from heat delirium in “Exodus from Genesis”. Again, he is by her side as she recovers, and again, he clearly has feelings for her. However, befitting the adult he is, although he is clearly jealous of the emotions Larraq stirred in Aeryn, he mostly keeps it to himself. Any worry he shows her revolves simply over her brush with death. And, of course, what he doesn’t know here is that she isn’t out of the woods yet, and that they will indeed be going to that Gammak Base (meanwhile, D’Argo and Zhaan are praying that they’ll never have to cross paths so closely with the Peacekeepers again, which will happen in the very next one), with Larraq posthumously being more of a help to them than he could ever know. At the same time, it will also lead John to the darkest place he has ever been, with the most fearful enemy.

Just one more thing: the fact that Larraq and his team were able to be fooled at all makes an interesting statement about both the PKs and the people aboard Moya’s importance to them in the grand scheme of things. While the Peacekeepers are the biggest threat in their lives, a few escaped prisoners and a deserter are hardly top priority knowledge for such a vast military force. Crais is after them and knows who they are due to a personal vendetta that he has been ordered to disregard, which none of the rest of his crew know, which only goes to show that any given PK may only know as much as their immediate superiors decide to convey to them. One could attribute Larraq and his crew’s lack of knowledge to their being off the grid for a long time, which might be true to an extent, but Crichton and his friends are further proven to not be commonplace knowledge at the Gammak Base in the next episode, at least at this point. Later on in the saga…well, that’s another story. 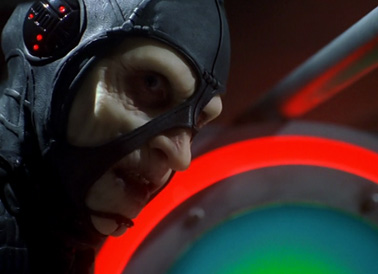 This is it: “Nerve,” the episode in which Farscape truly became Farscape; the point at which every thread that had been gradually building over the course of the season through B-plots in otherwise largely standalone episodes all suddenly came to a head, as well as the episode in which the true story of Farscape finally began to reveal itself. It is the start of a two-parter that completely changes the landscape of the show forever, the turning point where it becomes even darker and richer and more genuinely operatic than anything that came before could have possibly prepared us for. I vividly remember the first time I saw this episode and the second part, which I’ll be covering here next week, and they absolutely blew me away. I watched them over and over again, completely mesmerized by the show’s utter bravery and daring in doing what it does here, narratively and filmically, not to mention Ben Browder’s absolutely fearless performance, which is when, for the first time, I really took notice of what a brilliant actor he is. Not just good, but exceptional.