After continuing our journey with John Crichton last week with “A Human Reaction” and “Through the Looking Glass,” our Farscape re-watch continues this week with the eighteenth and nineteenth episodes of Season 1. 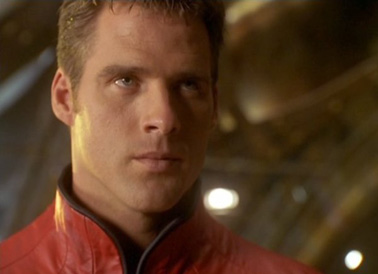 Remember that thing I said about the dren always hitting the fan just when everyone on Farscape seems to be on the verge of happiness? Well, true to form, the very next episode after Moya and her passengers finally united as a true family for the first time, everything starts to fall apart–not necessarily in regards to their feelings for one another, although they are tested to an extent, but as far as their ability to survive out here together in the Uncharted Territories.

Watching the final scene of “Through the Looking Glass” and then immediately going on to the start of “A Bug’s Life” is particularly jarring, as in its very first shot, D’Argo is again being chained up in his cell–the one thing he had sworn he would never allow to happen again. Immediately after this deliberately disorienting image, we learn the reason: a Peacekeeper black-ops team on a top-secret mission but with a damaged ship comes across Moya and commandeers her in order to take them to a PK Gammak Base, also secretly located in the Uncharted Territories; with starburst still mostly down, Crichton comes up with the plan of continuing to masquerade as a prison ship, he and Aeryn taking on the roles of Peacekeepers (aww, Crichton’s “PK accent”), Chiana as a servant, and the original prisoners once more locked up. This seems a good way of investigating what the PKs are doing in this part of the galaxy, as well as a method of avoiding a space battle, given Moya only has defensive capabilities and her primary one, starburst, isn’t an option at the moment. However, once the PKs are aboard the ship, the “prisoners”–primarily D’Argo–urge Crichton to allow them to overpower the team, while John continues to insist the plan go forward, which arguably is the reason everything goes south.

Well, it isn’t fair to blame John entirely. Everything might have gone smoothly if it weren’t for Chiana and Rygel’s inherent greed, the two of them for the first time teaming up to accomplish shady-doings, namely attempting to steal whatever secret thing the PKs are transporting to the Gammak Base. They assume it must be worth a great deal due to all of the secrecy, but once they open it, they instead discover a strange alien creature that turns out to simply be the carrier for a deadly “Intellant virus,” an intelligent virus that literally jumps from host to host, taking over their bodies in order to hide and defend itself, until selecting the one in which it will remain and lay its millions of eggs. The virus possesses one of the PKs before instantly jumping to Chiana, who kills him and goes back to the others, claiming that Rygel is the carrier.

This all adds up to a remarkably tense episode in which everyone on Moya grows increasingly paranoid as to who is carrying the virus. Naturally for this sort of story, it hijacks multiple people over the course of the hour, although it’s even scarier here than this sort of plot would be on Star Trek, because the virus can hide more effectively. In the overall clean, antiseptic world of a Federation starship, it isn’t that difficult for the crew to eventually notice when someone seems not right. On Farscape, however, people acting strange and shady is the status quo. This also allows all of the “infected” actors to underplay the possession, acting only slightly off, rather than hammily evil. Chiana proves to be the perfect host for a while, because no one knows her very well yet, and “infected” Chiana isn’t significantly odder or more alien-seeming than regular Chiana. And then there is Crichton, who is already currently assuming the role of someone he isn’t, and so the virus can at least temporarily fool the others into thinking his strange behavior is all just a part of his false identity. Significantly, however, spiritual, perceptive Zhaan is the first one to grow suspicious when something feels wrong. She picks up on Chiana’s slightly dazed expression, indicative of temporary amnesia after the virus left her, and also starts to suspect Crichton after he punches her in the face. While he could have simply been acting the role of the PK captain, Zhaan knows him well enough to realize that he wouldn’t go that far, even for a ruse. She also later uses her apothecary skills to create the serum that determines who is carrying the virus.

Returning to Crichton’s potential for violence, though, the fact that that is what tips her off is both crucial and ironic, because by the end of the episode, Crichton will have performed his first act of voluntary murder, albeit for good reasons–after the PK captain, Larraq, is infected, brutally stabs Aeryn, and tries to make his getaway in the PK ship, Crichton allows him to escape and then blows up his ship by igniting its leaking fluid with Moya’s starburst power, in order to save the potential billions who could have been infected had he allowed him to get away. Fittingly for Crichton, he kills him with science. This intellectual, indirect act contrasts sharply with Crichton’s involuntary act of murder earlier in the episode, when he kills the female PK scientist with his own hands while his mind is possessed by the virus. Technically, Crichton bears as little direct responsibility for the first death than he did for Crais’ brother in “Premiere,” although he does harbor guilt for it (for which Chiana touchingly if rather ineptly consoles him) but the second is a conscious decision, and while it was undoubtedly the right call, it is a call he very well might not have been able to make earlier in the season. His travels (and, ironically, perhaps mostly his trip to the false Earth in “A Human Reaction”) are starting to strip away at his earlier moral code and his youthful naivete.