After continuing our journey with John Crichton last week with “They’ve Got a Secret” and “Till the Blood Runs Clear,” our Farscape re-watch continues this week with the twelfth and thirteenth episodes of Season 1. 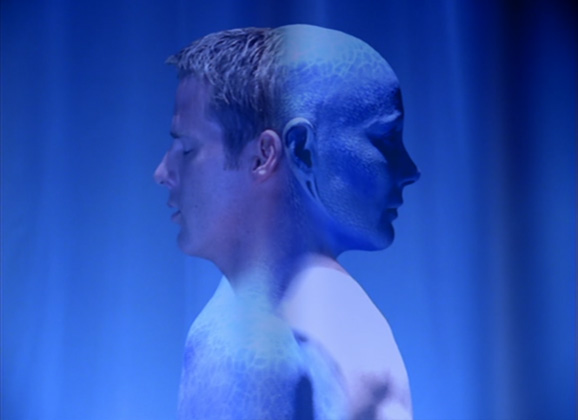 In the Farscape canon, “Rhapsody in Blue” is an extremely special and important episode. For one, it is a crucial one for Zhaan, largely setting the tone for her arc to come. Although the internal battle between her serene, spiritual side and her dark, chaotic side had been introduced in “That Old Black Magic” and obliquely followed up on in “DNA Mad Scientist,” this is the first episode fully devoted to Zhaan, and it is a truly gorgeous one that explores that struggle for dominance of her soul in depth, revealing the crime that led to her incarceration, as well as introducing us more deeply to the Delvians and their religious order, the Seek. It’s also a landmark episode for Farscape in the sense that it is the first to fully immerse itself in dreamscapes. The show flirted with surreal visions and POVs in “Back and Back and Back to the Future,” but this is the first hour of the show to truly feel like a dream from start to finish. Even when a literal dream or nightmare isn’t unfolding on screen (and much of the time, one is), the episode has a deliberately hazy, dreamy feel, enhanced by the mystical music, surreal vibe, and beautifully alien aesthetic of the Delvian temple ship and the simple yet exquisite Unity sequences.

When the episode begins, Moya has independently starburst, another early example after “They’ve Got a Secret” that establishes Moya as being capable of independent thoughts and drives. As with her behavior when she first became pregnant, this is also fully driven by instincts. She hears what she believes to be the cries of another pregnant Leviathan, and decides to come to the rescue. Meanwhile, everyone on board the ship has been having intense dreams that involve strong memories of their last time with loved ones/sexual partners. John dreams of Alex, a woman to whom he almost proposed before she left him to join a program at Stanford, D’Argo dreams of his last night with Lo’laan, Rygel dreams about his final night of passion with one of his many wives, and Zhaan, we later learn, dreams of the night she killed her former lover, Bitaal. Although Aeryn doesn’t share who she dreamed of, we can extrapolate that it was most likely Velorek, the night she betrayed him. As I’ve mentioned many times in the past in regards to Aeryn, more on this when we get to “The Way We Weren’t” in Season 2.

The cause behind all of these intense dreams is soon afterwards revealed to be Tahleen, another P’au–similarly lost in space–who has set up a temple on a barren world, along with a number of others in her sect. She requests Zhaan’s help and wisdom in order to control her own inner darkness and that of her followers, and offers to teach Zhaan her own considerable powers in shaping peoples’ dreams, along with manipulating their memories. Upon landing on the planet, we soon realize that this struggle to maintain sanity is a hazard that all P’au must face. Having only know Zhaan up to this point, we might have assumed that Delvians are, on the whole, blissfully spiritual, but this episode reveals that her savage period was no fluke nor rare occurrence among her kind. Becoming a P’au takes an enormous amount of inner strength and will, and many who attempt to follow the path of the Seek go mad. It seems that even under the best of circumstances, this is a danger, however it can be somewhat controlled by going through each step very gradually. Tahleen’s father and she have been pushing themselves too hard, attempting to advance too quickly and as a result, he has already fallen hopelessly into madness and she is well on her way. She wants Zhaan to share Unity with her–basically a Delvian mind-meld with sexual overtones–so that Zhaan can share with her the part of herself that allows her to maintain her spiritual balance, which also shows just how impressive Zhaan is. Over the course of 17 cycles, she managed to get her own raging madness under control, by herself, in a PK cell, and advance to the 9th level, whereas even with the support of a mentor and disciples, Tahleen–who has some seriously impressive powers herself–can’t do it alone.

Just as when Zhaan used her inner darkness to fight Maldis, Tahleen’s behavior actually springs from good intentions. She wants to eventually return to her home planet and free it from the oppression of the conservative sect that staged a coup, repressed freedom on Delvia, and paid the Peacekeepers to squash any rebellion and enforce their laws. In this episode, we learn that Zhaan herself went to jail for murdering Bitaal, the man largely responsible for the coup, as well as her own father’s imprisonment on a work planet, and so one can see why Zhaan is tempted by her offer, despite not trusting her. She’s fairly certain that, once she teaches Tahleen this power, Tahleen will use it for her own aggrandizement, but she also believes that Tahleen might be Delvia’s best hope for freedom.

I always loved that, while everyone else stays on Moya, Zhaan chooses John to stay with her on the planet, in order to be a sounding board for her and to help keep her balanced. And I believe she does so because she considers him to largely be the most innocent among them–very ethical but also very open to the world and new experiences. She likely remembers how he defended Pilot in “DNA Mad Scientist” and was ultimately right about how wrong they were to trust NamTar, and how, by simply talking to the frightened Moya in “They’ve Got a Secret,” he was able to convince her to restore life support, not to mention how he helped restore D’Argo’s sanity through taking on the role of Macton. And he proves himself to her yet again early in this episode, in a lovely little scene in which John is marveling at all of the wonders aboard this ship, trying to understand why Aeryn seems so jaded by it all. “I don’t think anything amazes you. I mean, look at this,” he says, lifting up a strange aquatic creature that is part animal, part plant–much like the Delvians themselves! which still isn’t revealed in this episode but is another wonderful clue–“You ever seen one of these before?…It’s unique. It’s a squidcalamaricucumber, and it is incredible. Look up. Look at this. This is a ship, Aeryn, and it’s incredible…Almost everything we see, almost every day, is brand new to both of us. It’s worthy of response.” And this is a fascinating point. Aeryn always acts “been there, done that” about everything even though, technically, being in the Uncharted Territories, she’s just as out of her depth as John is, yet she hides it behind that hard exterior. Zhaan needs John, who she has grown to respect for his ability to both be an adult but also to be willing to try to understand others.