–The scenes in which D’Argo babies Rygel are among the funniest of the show up to this point, and brilliantly played by Simcoe and Jonathan Hardy, the voice of Rygel.

–The final scene, in which Aeryn and D’Argo have a heart-to-heart and in which–in true Farscape style–she is very honest with him that she was always taught that unions like the one he shared with Lo’laan were an abomination, and yet what she doesn’t say but implies is that she no longer thinks that, a sentiment sealed by her promise to him that she would never reveal the truth about his son to anyone. In moments like this, you can see these soldiers truly connecting, and it’s truly lovely. The emotions are restrained but feel honest and real, and in some ways are even more heart-stirring because of it. These small gestures speak a thousand words. 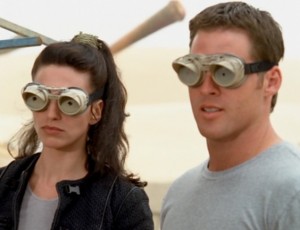 “Till the Blood Runs Clear”

One step forwards, two steps back. Well, not exactly, but sometimes it certainly feels like that, when it comes to the crews’ relationships with one another. While not quite the seismic shift that occurred in “DNA Mad Scientist,” “Till the Blood Runs Clear” again puts Crichton at odds with Aeryn and D’Argo–in the case of the latter, just when they had been on the verge of true friendship–and this time fascinatingly due to the very same reason that Zhaan, D’Argo, and Rygel conspired to chop off one of Pilot’s arms in the aforementioned episode.

When discussing that one, I mentioned that, although Crichton is right to be horrified by what they did, it was an easier call for him to make, given his chances of getting home were throughly unaffected by it. And though it might still be difficult to imagine him going that far, here he shows himself capable of similar utter selfishness when it comes to his returning to Earth. And really, who can blame him? Although by extension one has to also consider, really, who could blame the guilty trio for at least the impulses that led to their behavior in “DNA Mad Scientist”? Crichton may not dismember a fellow crew member but he does put Aeryn and then the others in considerable danger, all in the hopes of getting back to Earth immediately, further belying any idea we might have had due to our identification with John as the protagonist that his desire for home is any more important than any other person’s aboard that ship. This is why they don’t give him special treatment or grant him extra latitude for his learning curve. They’re all lost in space.

At the start of the episode, John and Aeryn are in Crichton’s module, taking readings. They’ve found a planet going through a great deal of solar flare activity, and John wants to investigate, since it was traveling round his home planet during solar flares whilst performing his slingshot move that created the wormhole in the first place. Without Aeryn’s knowledge or permission, he feels compelled to perform the slingshot maneuver again and, lo and behold, a wormhole forms! Or, at least, a very unstable proto-wormhole. But although Aeryn yells at Crichton to snap out of it because it’s beginning to suck them in, he doesn’t hear a word she says, remaining completely transfixed by it.

This is the first time we see him truly gripped by “wormhole madness,” this intense desire to create one overriding all else, even though Aeryn tells him repeatedly that not only is this wormhole not fully formed–and therefore capable of tearing them apart–but there’s no guarantee that it will even take him where he wants to go. And, really, the most troubling thing about it is that in the worst case scenario, Aeryn could have died due to John’s actions, and in the best case–assuming they could survive this wormhole and it did actually chance to take them to Earth–Aeryn would have been unwillingly shot to Crichton’s homeworld along with him, with no reliable way to get back to her neck of the galactic woods. Although Crichton’s desires are completely understandable, he messes up here, no two ways about it, and this is just the first time this will happen when the faintest chance for him to get home rears its head.

Ironically, his behavior here also nearly dooms his chance to ever get home, because his module is damaged while trying to escape the wormhole, and they find themselves having to go down to the planet in order to have repairs made by a local mechanic, Furlow. Moya and Pilot won’t allow him to bring it back on board, since it’s leaking fluid, which could prove dangerous to the baby, and faced with the decision to either abandon his module and possibly his only way home (we learn in this episode for the first time that wormholes are not a common occurrence in this part of the universe, and that, in fact, as Furlow tells John, they were considered purely theoretical here as well until this proto one was spotted–she clearly not being aware of the one that brought Crichton here–which naturally piques her interest), or take it down to the planet, he goes with the latter option.

This also proves to be dangerous, however, when they discover that a beacon is transmitting on this world from Crais, who promises a hefty reward to anyone who can capture Moya’s escaped prisoners and return them to him. And so Crichton puts them directly in the path of dangerous bounty hunters, specifically two Vorcarian bloodtrackers–very animalistic aliens with the personalities of nasty hunting dogs–called Rorf (the male) and Rorg (the female), nearly getting D’Argo killed when the two capture him, and indirectly hurting Aeryn when she takes a solar flare to the face whilst fighting yet another bounty hunter, leaving her temporarily blinded (and at the time, in danger of being permanently blinded). And in the end, he will have to willingly give up all the data he collected to the canny Furlow, ironically to pay for the repairs to the module.