After continuing our journey with John Crichton last week with “That Old Black Magic” and “DNA Mad Scientist,” our Farscape re-watch continues this week with the tenth and eleventh episodes of Season 1. 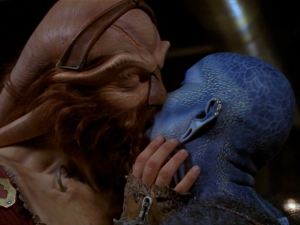 “They’ve Got a Secret”

“They’ve Got a Secret” is an episode built on such an ingenious misdirect that, before rewatching it this time, I’d nearly forgotten that, for a large portion of the hour, the characters are on the entirely wrong track as to what is going on–although one that certainly makes sense, given the brilliant red herring of D’Argo’s temporary madness tied with all that seems to be going wrong with Moya. Furthermore, it culminates in a reveal that could happen on no other show but Farscape.

Other shows and sci-fi tales have toyed with the idea of tech that demonstrates some measure of biological life, but I can’t think of any other one that has pushed the idea so far that not only is the ship, Moya, alive, but she is a full-fledged animal capable of feelings, at least primitive thought, and even some level of communication. One thing that viewers may not have considered before this point is that, being a biological creature means Moya can have offspring, and that is exactly what happens in this episode. Bless Rockne S. O’Bannon, David Kemper, and the rest of the creative team for thinking of this absolutely bonkers yet beautiful idea of a motley crew of escaped prisoners and other outcasts running for their lives on a living ship who just so happens to be with child. That’s right–there is a tiny, fetal ship growing inside of her.

But, wait, it gets better: she hasn’t been pregnant this entire time. No, instead, one of the crew–D’Argo–accidentally impregnates her when trying to remove a PK device installed in a canal of hers that looks suspiciously, in retrospect, like a huge fallopian tube. As soon as he rips it off, a strange liquid–which, we later learn is basically Leviathan semen, making the imagery devilishly funny on a rewatch–explodes upon and around him into Moya, and a moment later, he’s ejected into space. At the end, John will comment that clearly the PKs put up that contraceptive wall to prevent this pregnancy from occurring, so they need to be prepared for some trouble along the way. Interestingly, this isn’t exactly the case. While it was erected (no pun intended) to protect Moya from the dangers of the pregnancy occurring, it was actually done by Velorek, who was trying to save her from the other Peacekeepers, and Crais in particular. That entire story will come out in the second season’s gamechanger episode, “The Way We Weren’t”.

For now, however, in some ways, Moya’s pregnancy can’t actually come at a better time for the group, who had all faced a trial by fire in the previous episode. Just as there are many previous instances on the show of a wrench being thrown into the characters’ relationships just as soon as they start to show signs of improvement, this episode is the opposite. After many of the characters were at their darkest and even ugliest in “DNA Mad Scientist,” the start of this episode finds them tentatively trying to heal their rifts and make up for their behavior. Zhaan, for example, makes a point of asking how Pilot is doing (and one might even still detect a hint of residual anger in Pilot’s voice when he responds), and later, when John references the genetic experimentation done on Aeryn, her first reaction is to deny that Aeryn could still be experiencing after-effects, the subtext seeming to be that she’s still ashamed of what happened and wants to just put it behind her. What this episode accomplishes is to renew all of their bonds to one another, first by their having to tend to D’Argo, who is not himself when they bring him back on board, seeming to be reliving an earlier time in his life, then by their having to join forces to figure out what is wrong with Moya, and finally by the revelation of Moya’s condition, which despite causing some worry mainly brings them joy and a sense of group cohesion they had never had before now.

Thematically, this episode is rock-solid, John’s eventual discovery of Moya’s impending motherhood paralleled by the revelations of D’Argo’s past, including the fact that he once had a wife, Lo’laan, and a child, Jothee, and that he had lost them at the hands of Lo’laan’s brother, Macton, who hadn’t wanted her to marry him due to his race. The exact manner in which D’Argo’s story is revealed to us, not through flashbacks but through the device of D’Argo confusing Zhaan for Lo’laan, Rygel for Jothee, and Crichton for Macton, and interacting with each as if they were these people would not have worked nearly as well if it weren’t for Anthony Simcoe’s absolutely brilliant performance, taking his portrayal of D’Argo to a whole new level here, not only demonstrating the seemingly conflicting sides of D’Argo we had known before–his warrior nature vs. his gentle tendencies and smaller dreams, as first revealed in “Thank God It’s Friday…Again”–but revealing even further facets.

For the first time, we see what he was like not only as a loving husband but a loving father as well, and we finally start to learn what really makes him tick–that, as I referenced in my “TGIF” review, the greatest tragedy is that D’Argo had once had the very dream he mentioned to Zhaan and had lost it. He arguably has an even more visceral reason for hating the Peacekeepers than most. His wife had been of their species and had been killed by her PK brother for having had the nerve to mix her Sebacean bloodline with that of a Luxan. This is absolutely masterful writing. Simcoe navigates each of these emotional beats magnificently, taking D’Argo from joy to anger to anguish to madness and back again, each scene with the other characters effectively becoming short one-act vignettes, flashing back to various scenes of his former life, him relating to each person in a different way. Zhaan is particularly sweet with him, which I also read as her atoning for her actions in the previous story. They were a real wake-up call for her.