After continuing our journey with John Crichton last week with “Throne for a Loss” and “Back and Back and Back to the Future,” our Farscape re-watch continues this week with the sixth and seventh episodes of Season 1. 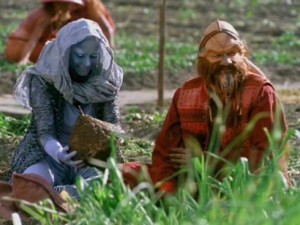 “Thank God It’s Friday…Again” is another one of those early Farscape episodes that don’t seem to be terribly popular with fandom but which I find interesting for numerous reasons. The thing with early Farscape for me is that, while some shows still trying to find their voices produce episodes early in their run that don’t easily mesh with what the series later develops into, Farscape actually has a great deal of its DNA intact right from the start, and so I find revisiting the start of the show and watching the characters and plots evolve into the story that we know and love to be an illuminating experience, because the gradual progression almost feels deliberate. This episode may be lacking the kinetic energy of later Farscape but the character development, the themes, the worldbuilding, the humor, and even the darkness is all very much there.

At the start of “Throne for a Loss,” I talked about how much the Farscape writers loved undercutting any sentimentality right off the bat, so whenever the characters seemed to be reaching a moment of shared understanding or connection at the end of one episode, it would be deliberately uprooted by the next (or even within the same episode). “Thank God It’s Friday…Again” plays the same trick, but even more directly than the previous example. “Back and Back and Back to the Future” ended with John and D’Argo–after having been in conflict regarding a woman (although the attraction/jealousy was only one-sided and misinterpreted by D’Argo)–bonding over their shared loneliness and yearning for a romantic partner. The start of the very next episode throws us completely off-balance by showing us our first instance of Luxan hyper-rage, in which male Luxans will go into a blinding, uncontrollable rage that seems to often be centered on any other comparable male in the nearest vicinity and due to that is likely linked at least on some level to sexual competition between males for alpha dominance. Crichton has to go into hiding so D’Argo won’t kill him (another interesting reflection of the previous episode where, in one of the future flashes, D’Argo did, out of jealousy over Matala; also cool: D’Argo gets laid this week, the very episode after he discusses his sexual frustration). Incidentally, this is yet another early indication of just how huge Moya is, as John is able to hide from him for 3 days on the ship.

And then, because John and we may not feel disoriented enough, when they next see D’Argo, down on a nearby planet where he has gone to cool off for a few days, the big guy is thrilled to see him and gives Crichton a huge hug, completely blissed out on this strange planet full of happy workers, who spend hours toiling in the fields to harvest one particular root, and each night happily partying their brains out, awaiting a subsequent rest day that never comes. Now, what might be most interesting about the scenario is that, on a first viewing, one would expect that this kinder, softer D’Argo who gets utter satisfaction from planting and working the fields is completely out of character and that this is all the result of some sort of exterior influence such as drugs or mind control, but although he is indeed high on the tannot root, what we learn over the course of the episode is that this desire for a quiet, simple life is actually fundamental to his character. We just hadn’t realized it yet.

In the DVD commentary for the episode, Farscape co-creator Rockne S. O’Bannon discusses how they very deliberately introduced a number of science-fiction archetypes in “Premiere,” only to then methodically subvert our expectations for those kinds of characters as we got to know them better. Farscape is practically revolutionary in having a big, strong, warrior type who seems to be of the same mold as Worf on Star Trek: The Next Generation but who is then revealed to actually want to be a farmer! He even admits to Aeryn that he wasn’t a soldier for very long. He was a prisoner far longer.

At the end of the episode, D’Argo reveals to Zhaan that he had always imagined his life going in two very divergent paths. Part of him did want to be a proud, brave Luxan warrior who would bring glory both to himself and his people, and who would be remembered in story and song for generations, but another, equally strong part instead craved the simple life: a wife, children, a small patch of land to tend and call his own. In other words, the opposite of what his society, as a whole, values. In many ways, underneath his brutish exterior, D’Argo has the soul of a poet, and it’s something that he only reveals at this point to Zhaan, in a lovely extension of their first conversation in “Premiere”.

Zhaan even references that earlier dialogue when she gently chides him by saying, “Only two?” in response to his two dreams for himself. It’s an exact echo of her first “Only two?” which was in response to the number of battle campaigns he’d seen, when he was trying to impress her in the first episode. That first scene also demonstrated some sexual tension between the two, which then became sublimated to a degree by Zhaan taking on a more maternal role with him. Here, she retains that maternal role and yet the sensuality returns when he admits that he had been planning on approaching her sexually that night and she responds that she would have gone for it. Rarely is sex handled this directly and naturally on any show, let alone a sci-fi series with Jim Henson puppets.