After continuing our journey with John Crichton last week with “I, E.T” and “Exodus from Genesis,” our Farscape re-watch continues this week with the fourth and fifth episodes of Season 1. 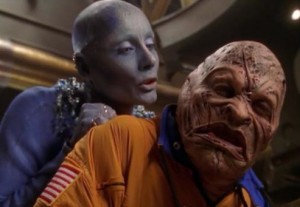 “Throne for a Loss”

“Throne for a Loss” is one of my favorite early episodes of Farscape. It’s actually the one that, on my first watch, inspired me to start falling for the show. I wouldn’t say it was full-on true love until the ingenious two-parter of “Nerve” and “The Hidden Memory” near the end of Season 1, but after being intrigued by the first few episodes but not yet fully sold, this is the one that convinced me that I definitely wanted to stick with it.

After the jam-packed premiere, the next two episodes had significantly slower pacing. I’ve come to appreciate them more on rewatches due to their excellent character development, but “Throne for a Loss” is the first that really starts to feel more like later Farscape, with a great deal of driving visual and musical kinetic energy running throughout, a lot of physical comedy, and even some hints of the darkness that would grow more prominent as the series continued to evolve. Additionally, it features some classic John/Aeryn banter that would set the tone for their relationship as it continued to grow, and a crash course in how much of a little bastard our beloved Dominar Rygel XVI could be.

If there’s one thing Farscape loves, it’s not allowing the crew to all feel too gooey towards one another for too long. Even as the last episode started drawing them together, showing how they’re gradually, tentatively starting to become a family, this episode once again has them at each other’s throats, which ironically is very much like an actual family. Farscape is a show that tends to undercut sentimentality as swiftly as possible and so the sweet moments they each shared nearer the end of “Exodus from Genesis” prove to have been short-lasting, affirming right from the get-go that neither the series nor the characters are going to be losing their edge any time soon (and, of course, they never do). And so, in the very first scene, John and Aeryn are arguing, and rather (adorably) childishly to boot–a sharp contrast to the final scene of the previous episode–soon afterwards, D’Argo is acting like a bullying brute–albeit due to the stimulant in the Gauntlet–and after hearing that John has a plan to disarm D’Argo, even Zhaan–who, at the time, we might have thought of as all-patient and serene, and who has been the most understanding of Crichton’s alien learning curve so far–rolls her eyes and seems to curse under her breath at the idea.

The latter is particularly interesting because it is one of the reasons that Zhaan is such a fascinating character. Although when we first met her in “Premiere,” she seemed very Earth mother/hippie (and in “Exodus from Genesis,” she seemed the picture of patience with Crichton), we were also told right off the bat that she was an anarchist, which means she can’t always have been as centered as she seems, but since then, we have mostly only seen her calmer side. But there is a darker side to her, which starts to peer out in this episode and really emerges in “That Old Black Magic”. Her momentary lack of patience here might seem initially jarring on a first viewing, but it isn’t actually out of character. It simply makes her more three-dimensional. Who among us hasn’t had an instance of annoyance even with a good friend where we might internally grit our teeth but then hide our true opinion to spare their feelings? It doesn’t mean that she doesn’t genuinely empathize with John’s plight nor that she doesn’t have a good relationship with him. It’s just that she feels a brief twinge of annoyance here, likely because the stakes are high, with Rygel having been kidnapped, them having taken one of his captors prisoner, and D’argo stalking about the ship, and she isn’t in the mood for his Earth shenanigans.

And, naturally, his plan does end up banging everyone around, although it’s also another awesome example of him using his scientific knowledge to get them out of a jam, since he knows he can’t physically overpower D’argo. At the end of the episode, he’ll again use his brains rather than brawn to save the day, but we’ll get back to that later.

Some fans have criticized Zhaan’s plot in this episode as being too “anti-drug PSA,” but I think that disregards the major point that, unlike the typical moralistic story of this sort, even after all of the time she spends with the young Tavlek warrior, trying to help him detox and realize that he can have a fulfilling life without the Gauntlet, he chooses to go back on the drug as soon as he gets home. Despite his warming to her on some level, evidenced by his not selling them out to his ruler, Bekesh, in the end, she fails to get through to him. If this were a true “very special episode,” he would have learned his lesson. That short time with Zhaan would have opened his eyes. Instead, he gives into the pressures of his society and his addiction, despite moments of having seemed open to her influence.