And so the original story is arguably not the most relevant or complex to a modern audience. But with that said, Faerie Tale Theatre does an excellent job of handling it. Their general tactic in this one is to basically be as straightforward as possible. They smooth over the princess issue by having Aladdin (Robert Carradine)–who falls in love with the princess (played by Valerie Bertinelli) at first sight, as she passes him by in the marketplace one day–ask the Genie to whisk her to his cottage one night while she sleeps, which isn’t as creepy as it sounds. She immediately awakens, asks where she is, he tells her that a magical friend of his set up this meeting, and the two start to talk and realize that they both like each other a great deal. The feelings are reciprocal. 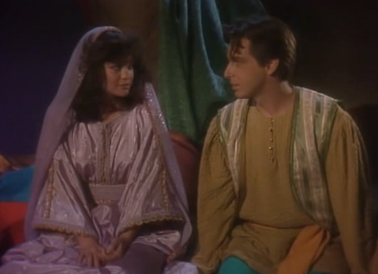 Possibly rushed, but this is a fairy tale, after all, and so she at least has more agency than in the original. And when it comes to the rest of the story, they do have Aladdin mature over its course, grow in confidence, and seem to get better about figuring out what exactly to ask the Genie for, but he certainly never makes the genuine transformation of Disney’s Aladdin, and that’s all right, but it definitely makes for a less emotionally resonant story.

There is some wonderful magic here, though. This episode was actually directed by Tim Burton–yes, that Tim Burton–and although, with its miniscule budget and typically cheap sets and costumes, you might never know it from a visual standpoint, there does seem to be a bit of the dark Burton sense of humor here. For example, when the Sultan tells Aladdin he can have her daughter’s hand in marriage if the boy can present him with an invention unlike any other he’s ever seen before–he currently has a music box in which three singing lips that look like they came from Rocky Horror serenade him… 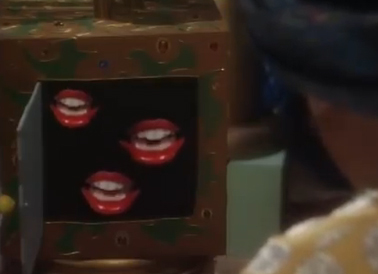 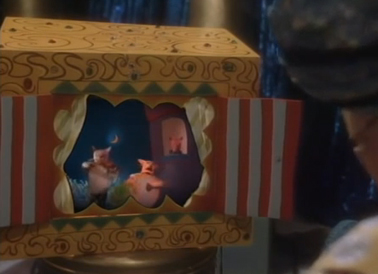 …the anachronism being a funny coincidence, given all of the out-of-time references in the Disney film.

He also directed James Earl Jones into giving a terrific and at times truly dark and frightening performance as the Genie of the Lamp. Unlike Robin Williams’ Genie, Jones’ is not mostly fun and games and instead has a much subtler sense of humor, which usually involves saying something threatening in his deep, booming, world-renowned voice that scares the pants off of Aladdin…and then laughing uproariously, saying he was only joking, not unlike Jean Stapleton’s Fairy Godmother, who delighted in messing with Cinderella in the Faerie Tale Theatre version. What I love about the performance is that it conveys what mysterious, ineffable creatures genies actually were in the old stories, rather than the snazzy showman approach of the Disney film, which, don’t get me wrong, I do love, but Jones feels more authentic. And, again, actually kind of freaky at times… 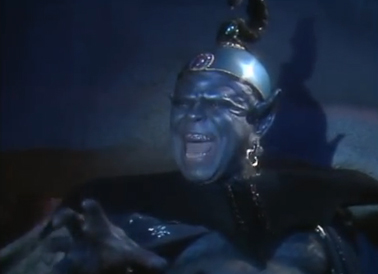 …which also contrasts beautifully with his gentle performance as the soft-spoken Genie of the Ring.

Leonard Nimoy is also scenery-chewingly fun as the evil sorcerer, hamming it up, because of course. And the Genie’s final punishment, sending him into the Sultan’s TV to be prodded for…the rest of eternity?…by demons with pitchforks is delicious. Aladdin and his princess don’t make nearly as memorable as impression, but with magical characters as outlandishly fun as these, they never really stand a chance.

Next: The Princess Who Had Never Laughed