And now, years later, I’ve decided to finally revisit this cherished series from my childhood, in order, continuing with the twenty-first episode, Puss in Boots, which first aired on September 9, 1985, when I was 4 1/2 years old, and which I am only now seeing for the first time… 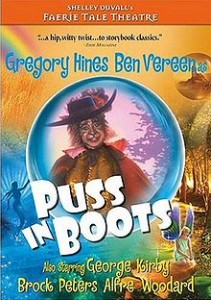 I wanted to love this one. I really did. I used to love the story of “Puss in Boots” as a kid, particularly how the feline protagonist cleverly outwits the ogre at the end by tricking him into impressing him by turning himself into a mouse, which he then eagerly devours. There aren’t that many fairy tales where not only is the animal the protagonist but the protagonist succeeds by actually outsmarting his opponents. He wins by being smarter than them and with no outside help, rather than through twists of fate and circumstance or by external magic. In fact, other than being an anthropomorphic cat, he has no magic, and actually uses a powerful magical being’s own magic–and hubris–against him.

The eponymous cat is another legendary dancer-singer-action, Ben Vereen: 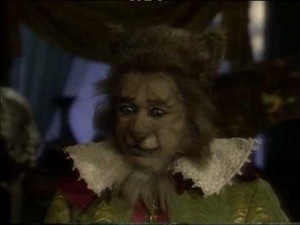 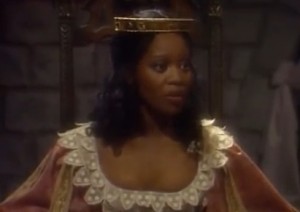 The king is actor-comedian, George Kirby: 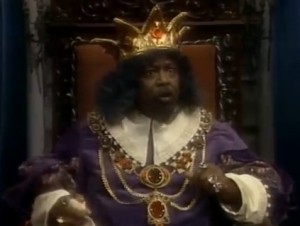 The ogre is Brock Peters, perhaps best known for his role as Tom Robinson in the film of To Kill a Mockingbird: 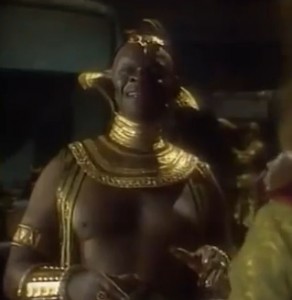 One of the little people heralds is Tony Cox, who also played a very memorable dwarf in Faerie Tale Theatre‘s Snow White: 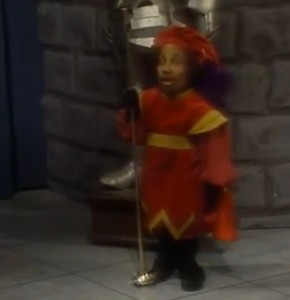 Again, I must reiterate. I really wanted to love this episode. Unfortunately, however, it suffers from glacial pacing that made it very difficult to maintain my interest, and although I generally love Ben Vereen, I found his meowy cat voice to be extremely irritating, and to only grow increasingly more so as the episode dragged on. It didn’t help that the particular voice he choice made Puss seem a bit whiny and pathetic throughout the story, rather than exceedingly clever and wise, as he should. I’m not saying that I was expecting Antonio-Banderas-in-Shrek-style swagger to the role, but a little more panache and self-confidence, and even a dash of cockiness, would have been nice.

Meanwhile, although the miller’s son is a bit of a jerk in the original story, Hines’ version comes across as completely unpleasant from start to finish. I didn’t believe there was any real emotional connection between the “boy” and the “cat,” and without that, the story was left feeling mostly empty, with no real motivation for why Puss didn’t ditch the ungrateful brat as soon as he got his fancy new clothes. “Because fairy tale” only works when I can buy that the characters at least grow to like each other.

Now, here’s what I did like: Alfre Woodard, Alfre Woodard, and, oh yes, Alfre Woodard. Ironically, I always think of her as such a grand, regal presence that it’s a total trip to see her here as a very young, inexperienced princess without any of the gravitas with which I always associate her today. Here, she’s youthful and naive and bubbly, and I particularly love the moment that she first meets and falls for the miller’s son, who–thanks to Puss–she believes to be the fictional Marquis de Carabas. The two immediately begin engaging in a stereotypical lover’s “Do you like [fill in the blank]? Me too!” “Do you like [fill in the blank]? Me too!” and so on and so forth, however hers include things like “bossing your servants around”. It’s one of the few moments where the episode really delves into the fairy-tale-trope-tweaking humor Faerie Tale Theatre was known for. The rest plays it a bit too straight and sticks too rigidly to the original story, with few of the clever riffs that the series’ best episodes are stuffed with.

Puss’ climactic face-off with the ogre is also well-done. Again, the script isn’t nearly as funny or clever as I tend to expect from the show. A better episode might’ve introduced many more gags into the sequence. However, I was impressed with how the show made the best of its small budget and actually used real animals for the transformations. The look on Puss’ face when he’s about to finish off the mouse is nearly worth the price of admission. This is also one of the scenes that really shows off Ben Vereen’s physical dexterity. It’s just a shame that they didn’t take more advantage of that throughout the episode.

Next: The Emperor’s New Clothes