In some ways, this Cinderella doesn’t stray too far from the classic Disney telling. In other words, it’s much closer to French fairy tale writer, Charles Perrault’s, version, than the Brothers Grimm tale. You can tell this because Cinderella has a fairy godmother rather than simply visiting the grave of her mother to get her wishes, and because at no point does the stepmother carve off any pieces of her daughters’ feet in an attempt to fit them into the glass slipper (Stephen Sondheim’s musical, Into the Woods might be the only popular rendition of the story that retains those darker, grislier elements).

However, it does follow the Grimm tradition of Cinderella going to the ball more than once. In the Grimm story, it’s actually a festival that takes place over multiple nights, and it’s only on the third and final visit where she loses her glass slipper. In this version, there are two balls, the second of which the prince throws simply to see Cinderella again. And one of the nice things about that is that it gives the couple an opportunity to get to know each other a bit better than the general love-at-first-sight schtick. Not that this is necessarily so much more time, but you do get to see a bit of evolution in their relationship, and in a nice twist on the original, rather than simply spending the ball alone together, we actually see them both interacting with other people, Cinderella charming not only him but others at court, which makes them feel less isolated and argues for her as being a genuinely good candidate for princessship.

Where this version truly sets itself apart, though, is in its sense of humor. As in most of Faerie Tale Theatre‘s best episodes, it finds a way of tweaking the well-known elements of the tale ever so gently, poking a small amount of good-natured fun at its conceits while never fully fracturing them. I’m particularly fond of the scene after Cinderella’s father’s death, in which her stepmother doles out the work load between Cinderella and her stepsisters. At first she gives Cinderella a chore, such as “all the cooking,” and then she gives her daughter a chore, namely, “you don’t have to do the cooking,” and so on and so forth, until Cinderella has a huge list, encompassing every single thing that has to be done, while her stepsisters are given the tasks of primping themselves and relaxing. When Cinderella later points out the inherent unfairness, the stepmother basically tells her that it’s justice for having been born prettier, smarter, and lovelier than any of the three of them. The scales have to be balanced, you see. 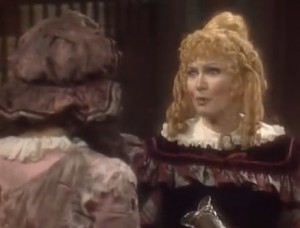 Laying down the law.

But even better might be the moment in which Cinderella points out a potential logic hole in her Fairy Godmother’s reasoning, namely why she chose now to appear and help her when she never showed up any previous time that her stepfamily was torturing her, which, naturally, causes the Fairy Godmother to change the subject as quickly as possible! I’m also quite partial to the fact that the Fairy Godmother can’t simply turn the pumpkin into a couch, because it would be full of seeds and gloop. Instead, she and and Cinderella have to do some manual labor first, carving the pumpkin and removing its innards before she can work the spell. 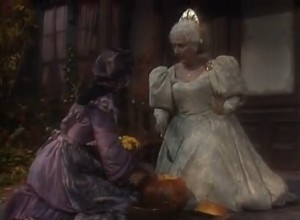 Scooping out the seeds.

It also does have to be noted that, while Cinderella’s second dress is Fairy Tale Princess lovely, the first does look unfortunately like a drab, puffy prom dress from Hell. 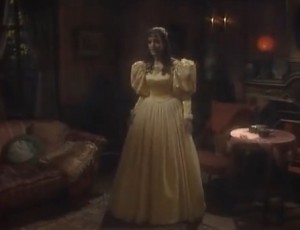 It’s a good thing she was able to have that do-over!

Next: Puss in Boots