Next up, I watched “Greatest Moments,” or “Grimm Party,” a special clip show/retrospective episode that was produced to celebrate the show’s third anniversary and which was lost for a while, until being later rediscovered for the complete DVD release. And, boy, is it ever strange! I would highly recommend fans of the series track it down on YouTube, because it is the trippiest, most 80s-est thing that possibly ever happened. It seems to partially be a filming of an actual costume party Shelley Duvall threw, with a hall filled with lots of familiar faces from the series, while the rest is held together by a bizarro plot in which Shelley is at home, late for her own party, because she can’t decide what costume to put on… 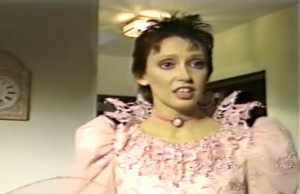 …when she trips over her dog (who is also in costume), hits her head and dreams that she is flying through outer space (in a green-screen-tastic sequence)… 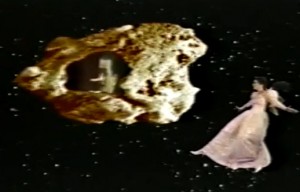 …finally landing in Germany, during the time of the Brothers Grimm, who then put her on trial for having altered their beloved fairy tales and those of friends of theirs: 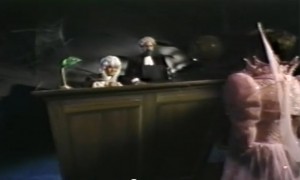 Duvall then has to use clips from various episodes as evidence in her defense that, while she did embellish certain elements, it was always in the service of simply enhancing the original stories, but never changing their essences. Every now and then, the show interrupts this dream sequence to cut back to the party, with small interviews with various actors about the roles they played. And as I said, this hour of television is amazing. Ridiculous and choppy and possibly completely deranged, but amazing.

Perhaps the weirdest thing about it, however, is that, even though it aired in 1985, it contains clips from episodes that didn’t air until 1986 or 1987, respectively. Now, I understand the clips from episodes later in the same season that hadn’t aired yet. They were previews. But I have no idea how to reconcile clips from the later seasons appearing so early. Did they finish shooting all the episodes in 1985 and not air the rest until later? Perhaps. But given there were only 8 episodes total after this one, only two of which aired in all of 1986, it seems odd that there would have to be such a huge gap between episodes. It also doesn’t seem that post-production would take that long for such a low-budget series. Maybe actor availability meant they could only record pieces at a time, and this episode just featured some pieces that had been filmed of unfinished episodes? Possible, but it still seems strange for them to have included clips for episodes that wouldn’t air for a year or two with no explanation or indication that they hadn’t actually aired yet. Part of me was wondering whether perhaps the episode re-aired at the end of the series, and some of those later clips were edited in then?

Or maybe this whole episode really is the weird fever dream it seems to be, and/or fell through some kind of time portal. I even double-checked to make sure that there hadn’t been a mistake in my episode listing, but, no, I even found a review of the episode in People Magazine, published in 1985. Very strange. Very, very strange.