And now, years later, I’ve decided to finally revisit this cherished series from my childhood, in order, continuing with the eighteenth episode, The Pied Piper of Hamelin, which first aired on April 5, 1985, when I was just over 4 years old, and the nineteenth episode, Greatest Moments, a reunion/clip show episode that first aired on July 17, 1985, both of which I’ve only watched now for the first time… 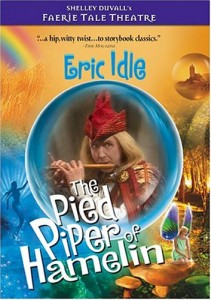 “The Pied Piper of Hamelin”

The Pied Piper of Hamelin is a fantastic episode of Faerie Tale Theatre about which I don’t have an overwhelming amount to say, for whatever reason. It might be because, in some ways, it’s actually a rather straightforward depiction of the story, without too many embellishments, albeit with a framing tale that seems to be set in Victorian London, in which a man played by Eric Idle tells the story of the Pied Piper to a little boy who he is babysitting. Idle then also takes on the role of the Piper within the story.

In a nutshell, this episode gets everything about the story right. Using the famous Robert Browning poem as a jumping-off point, a great deal of the script actually comes straight from Browning, with some lines spoken as narration and others given to characters within the story. Even many of the lines created for the episode are rhymed, to fit the poem’s style. Furthermore, it beautifully captures both the darkly humorous and eerie aspects of the story’s tone. The scenes of rat infestation are, by turns, funny and creepy, the old men who run the town–the “Mayor and Corporation”–are a perfect satire of greedy politicians, and as the Pied Piper, Eric Idle is surprisingly intense and disturbing. 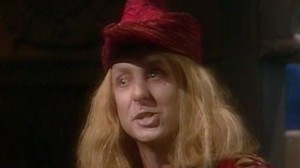 The Piper, who must be paid.

Given that this is a story in which someone steals all of the children of a town away, I was half-expecting Faerie Tale Theatre to soften the blow or to subvert the ending through a last-minute apology, but instead, I found myself enormously impressed by its refusal to do so. I can’t help thinking that if this episode were produced today, it would have had a different ending.

But, no, it’s ruthless both in its depiction of the Pied Piper luring the rats to a death of drowning in the lake as it is in the Piper heartlessly luring all of the children (except one lame one) away through a crack in the mountain and taking them to a different place. The Piper himself looks quite eerie from the start, with sallow skin and an almost-decaying visage, befitting a veritable spirit who will not suffer betrayal lightly, and the final image of the episode is the narrator finishing up the story in the bedroom, as a tear runs down the little boy’s cheek–a dark and fitting ending to a dark tale that has been impressively preserved here.