Speaking of which, in the original story, the Snow Queen is the antagonist. She kidnaps Kay and tells him she will hold him captive forever (or until he freezes) unless he can solve a certain puzzle. In the Faerie Tale Theatre version, however, there are many hints that, despite her icy exterior, she actually has captured Kay to teach him a lesson, so that he can learn the value of love and friendship and lose the mirror shard metaphorically blinding him. This was already an extremely unusual fairy tale in being centered on a strong, resourceful girl who has to rescue a lad-in-distress, held prisoner in a magical castle–many Frozen viewers may not realize how subversively feminist the original story was, as well, although the Disney film certainly goes even further–but Faerie Tale Theatre eliminates the seeming villain all together, as Disney will later with Elsa. Much like Jareth in Labyrinth, she plays the role of villain in order to fulfill a need in Kay’s life. 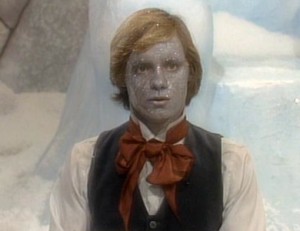 In another interesting, obviously unintended foreshadowing/parallel of Frozen, Faerie Tale Theatre turns the Lady of Summer–in whose garden Gerda finds herself whilst on her quest to find Kay–into the Snow Queen’s sister. Her polar opposite, but her sister nonetheless. And in a fascinating twist on the dichotomy between a beautiful exterior and beautiful intentions, while the Snow Queen is actually secretly working to help Kay, the Lady of Summer actually actively tries to block Gerda’s progress. She is so excited to have Gerda in her home that she wants to keep her there forever, much as she wants summer to last forever, and so attempts to eliminate her memory of Kay, a trick that only lasts a short while. She isn’t wicked, however, just a bit selfish. But in the Faerie Tale Theatre version, because the Snow Queen isn’t evil, it makes a very interesting statement that the one who tries to arrest a character’s development isn’t the sister with the frosty exterior but the one who seems to exude life and warmth. And while the Snow Queen seems to understand that she gets to rule during one specific time of year, it’s the Lady of Summer who resents not being able to do so all the time. 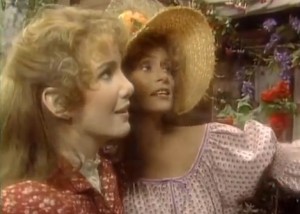 Gerda and the Lady of Summer

Faerie Tale Theatre further enhances its version’s feminism through the role of a young robber woman who at first attempts to rob Gerda but eventually becomes friends with her. This young woman really stands out amongst Faerie Tale Theatre because of how stereotypically “masculine” she is. We don’t see any other butch female fairy tale characters like this in the run of the series, as far as I know. She’s certainly a far cry from the extremely girly Southern Belle pig of the previous episode. Also, given that the writers of the episode actually trimmed out a number of Gerda’s adventures from the story but chose to keep this one in reasserts their commitment to centering this story on women.

Incidentally, watching this episode, I was also struck by how many elements of The Snow Queen made it into Frozen–and specifically this version, which makes me wonder if they’d seen it–including a young woman going on a mission to rescue her best friend, the clever twist being that her friend and the Snow Queen are one and the same, and that she is also the Snow Queen’s sister, making her the Lady of Summer, in a way; a magical shard piercing someone and nearly freezing their soul in the process, as happens to Anna, and which echoes both the evil mirror shard, as well as the Snow Queen’s magic slowly freezing Kay; the presence of trolls, who in the original story are evil, but here are beneficent figures. Interestingly, however, despite being well-meaning, they actually unwittingly contribute to what happens to Elsa, when her parents misinterpret their advice/prophecy, not unlike the goblin dropping the shards in Kay’s eye. And in both stories, the heroine manages to save the victim, however in Frozen there are 2 victims: the first being the Snow Queen, and the second being herself.

Returning to Faerie Tale Theatre, this is an absolutely stellar episode which takes a beautiful and strange fairy tale and actually in some ways improves it by strengthening its core message in numerous ways and in eliminating its unnecessary religious overtones. 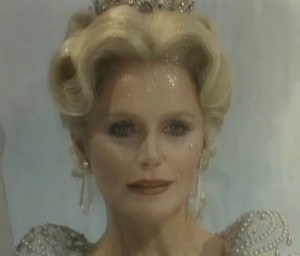 Next: The Pied Piper of Hamelin; Greatest Moments