And now, years later, I’ve decided to finally revisit this cherished series from my childhood, in order, continuing with the seventeenth episode, The Snow Queen, which first aired on March 11, 1985, when I was 8 days away from being 4 years old, and which I only now watched for the first time… 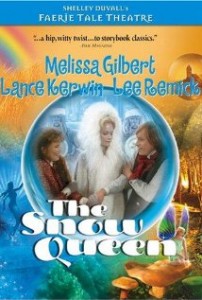 The Snow Queen is extremely huge right now, thanks to Disney’s recent juggernaut of an animated musical, Frozen, although I’m sure that tons of viewers don’t realize that it’s based on a fairy tale by Hans Christian Andersen, nor that it strays even further from the original story than the Disney norm, which is saying something.

And so it seems a perfect time to view Faerie Tale Theatre‘s take on the tale, particularly because the show has always been particularly excellent about handling Andersen’s stories, and this one is no exception. By Faerie Tale Theatre‘s general visual standards, it is actually quite a sumptuous production, with truly beautiful costumes and sets, particularly when it comes to the Snow Queen herself, as well as her palace. Some Faerie Tale Theatre scenery looks shockingly cheap today, such as the Giants’ castle in Jack and the Beanstalk and the witch’s gingerbread house in Hansel and Gretel, but while the ones on display in this episode certainly look like theatrical sets, they are very well-made theatrical sets, the snow palace icy and ornate, and the contrasting eternal summer garden equally gorgeous. 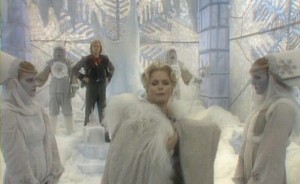 The Snow Queen in her palace.

One of the major problems in presenting The Snow Queen today is that there are many overt religious elements in the story that make it feel much more didactic than people generally like their fairy tales to be. Although the “devil” referred to in the story isn’t actually the Devil with a big “D” but rather a minor, darkly mischievous hobgoblin or troll, he does create an evil mirror that distorts reality by enhancing everything and everyone’s worst traits, with the explicit intention of bringing it up to Heaven in order to wreak havoc there. Similarly, later on in the story, the girl, Gerda, manages to get into the Snow Queen’s castle by reciting the Lord’s Prayer, which in turn makes her breath take on the visage of angels, who fight off the snowflake guards.

Faerie Tale Theatre, on the other hand, has the guards give her a riddle to solve, which she does, thus eliminating the Christian element and enhancing her own smarts in the process. And as for the “Devil,” he is instead presented as a goblin scientist, flying through outer space in a sort of magical floating laboratory–a playful, deliberately anachronistic element that really underlines his otherworldliness compared to the “real world” of Gerda and her best friend, Kay…before, that is, the glass shards get in his eye and the Snow Queen takes him to her palace. 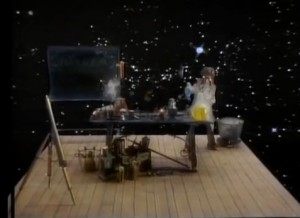 The Goblin in his laboratory.