This isn’t a perfect episode. The pacing gets a bit wonky by the end, and once you get to the umpteenth instance of a ghost or monster or what have you jumping out at Martin and growing increasingly incredulous at his non-response, it does start to feel a bit repetitive. One sequence, in which he bowls with them, using a skull as a ball, is funny but also feels practically endless. But it is different than the Faerie Tale Theatre norm. It feels refreshing to see them presenting a lesser-known tale, and the cast is frankly fantastic. Among those already mentioned, it also features rocker Frank Zappa as a mute hunchback, and the one and only Christopher Lee as King Vladimir–not playing Vlad the Impaler but his son, another nifty example of how the Transylvanian setting adds a further comedic edge to the story. 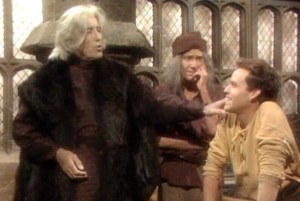 Because it’s Lee and because of the Vlad connection, it is, naturally, no surprise that he’s actually a sorcerer and behind the haunting of his own castle–and, of course, in his big face-off against Martin, he hams it up in the greatest of ways–although his reason for doing so provides a nice twist. He doesn’t want to lose his daughter to marriage, and so has set up a challenge that anyone who can rid the castle of the evil spirits can wed her, never intending for any potential suitor to survive the night, let alone three, as Martin does. I mean, sure, this is a pretty convoluted way to go about holding onto his daughter, but it’s a fairy tale, so you have to just accept fairy tale logic. Also, it’s a nice change to have an evil sorcerer…played by Christopher Lee, of all people…who turns out to be not so evil. 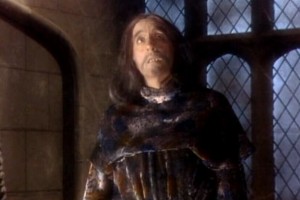 One could take issue with the depiction of the fearful princess, because she is awfully damsely, although this is also largely mitigated by the fact that everyone in the kingdom (other than King Vladimir) is equally fearful. And whereas in the original story, the boy only eventually learns about the shivers when his new wife awakens him in the night by dumping a pail of water on his head (and it’s specified that, while he does get the shivers from the cold, he doesn’t experience fear), this version has a clever twist: while ghosts and spirits may not scare him, as soon as he learns that he is to be married to the princess, only then does he start to get the shivers–not because he doesn’t like her but because whereas childish sorts of fears don’t bother him, adult ones such as lifelong commitment prove to be exactly the sort of thing to awaken this new sensation. There’s also a cute, albeit unnecessary tag, where he realizes that he’s never gotten the blues before, and starts a whole new investigation. All in all, a fun episode that might be a little lightweight compared to some of the series’ true classics but is a nice change of pace, for numerous reasons.

Previous: Beauty and the Beast

Next: The Three Little Pigs