And now, years later, I’ve decided to finally revisit this cherished series from my childhood, in order, continuing with the fifteenth episode, The Boy Who Left Home to Find Out About the Shivers, which first aired on September 17, 1984, when I was 3 1/2 years old, and which I only saw now for the first time… 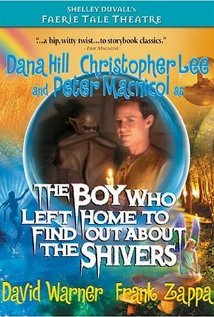 “The Boy Who Left Home…”

“The Boy Who Left Home to Find Out About the Shivers” is an unusual episode of Faerie Tale Theatre in that it is the first truly obscure tale that they did up to this point. Based on a lesser-known Brothers Grimm story that is more often translated as “The Story of the Youth Who Went Forth to Learn What Fear Was,” the episode is actually a rather loose adaptation of that tale, a variant of which also appeared on Jim Henson’s The Storyteller in the 1980s. It’s also quite a weird episode, though also a very entertaining one. The basic gist of the tale is all in the title. It’s about a young man, Martin–played by Peter MacNicol–who is completely immune to fear. Absolutely nothing scares him and never has, and he becomes rather curious to see what it feels like to actually get the shivers. In the original story, his father banishes him from his house because his lack of fear seems unlucky to him. Faerie Tale Theatre very cleverly intensifies and adds further exaggerated comedic effect to the situation by moving the setting of the story to Transylvania, which–in keeping with its classic horror story origins–is depicted as being a place full of fearful, overly superstitious people. Every single person surrounding the boy is obsessed with and terrified by the supernatural, and so by simply not being as timid as they, he sticks out as a genuine social pariah. The fact that nothing scares him makes him in some ways seem to be the scariest thing of all. He is not normal and therefore must be sent away. The tone of the piece is also beautifully established by Vincent Price’s narration–really the perfect person to underline both the eerie tone to this story’s universe, as well as the protagonist’s humorous obliviousness to all of the scares that surround him. His silky smooth yet delightfully idiosyncratic voice perfectly captures the shivers and the funny. While watching, I was wondering whether this episode would have scared me, had I seen it as a child. There are bits that–despite the low budget–are genuinely freaky, along the lines of the Rapunzel episode, such as the seemingly stone gargoyle with the living, human eyes, and the headless ghoul chasing after his screaming head. At the same time, McNicol’s entirely nonplussed reactions might have undercut the scares for me.