And now, years later, I’ve decided to finally revisit this cherished series from my childhood, in order, continuing with the fourteenth episode, Beauty and the Beast, which first aired on August 13, 1984, when I was just 3 1/4 years old… 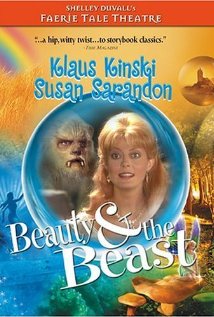 “Beauty and the Beast”

Most people today only know Disney’s Beauty and the Beast, which is actually a drastically altered version of the original story, which isn’t necessarily a bad thing. In fact, the creative team for the film deliberately decided to make it into a much more feminist story. You can read more about that in my in-depth analysis of the Disney film, but in short, basically what most don’t realize is that, in the original story, the test wasn’t on the Beast–unlike in the Disney film, he didn’t have to learn how to become worthy of Belle’s love–but on Belle, who had to learn to look past the Beast’s external ugliness to see the kind soul inside. In other words, in the Disney story, the Beast was turned into a monster as a punishment for his inner ugliness, and the way for him to eventually win Belle’s heart was to allow her to civilize him; in the original story, Belle was initially too shallow to see that the Beast was actually a kind, misunderstood prince all along. She had to see past her own prejudices to free the handsome man within.

And so, basically, this episode of Faerie Tale Theatre is a good introduction to the original story for those who only know the Disney film. It’s also, of course, neat to see Susan Sarandon as Beauty and Anjelica Huston as one of her two haughty sisters (who didn’t make the Disney cut). Unfortunately, however, it’s not a great episode, or a particularly good one, even. The pacing is odd, and Klaus Kinski’s performance as the Beast is strange, abrasive, and uncomfortable. It’s extremely difficult for a viewer to find any reason that Beauty would fall in love with him, particularly given that whatever the exact opposite of chemistry is, these two have it in spades.

Also, perhaps most damningly, in design and art direction, the episode is heavily influenced by Jean Cocteau’s brilliant, visually stunning, surreal 1946 film, La Belle et la Bête…which might not be an issue–in a different context, it could have been a strong point–except for the fact that it’s a pale imitation in every way. It basically compresses the 90-minute film into 45 minutes, while adding no nuance or twist of its own, and strips it of all that made it alluring and brilliant. This looks slapped-together and cheap, and while this accusation could be leveled at other Faerie Tale Theatre episodes, that aspect comes across worse here than usual, given that there is that film to compare it to. Also, they made the curious decision to film everything outside of the Beast’s castle on low-quality film stock, and everything within it on video. The film stock hasn’t aged well, actually looking worse than the video, which doesn’t look that great to begin with, making the whole thing quite an eyesore today.

I can’t think of any reason to recommend this to an adult viewer, when the far superior French film is available to buy and rent on DVD, other than as a curiosity due to the casting, or for a Faerie Tale Theatre completist. This episode is even lacking the underlying humor and cleverness that informs most of their productions. A true misfire.

Next: The Boy Who Left Home to Find Out About the Shivers