And now, years later, I’ve decided to finally revisit this cherished series from my childhood, in order, continuing with the thirteenth episode, Snow White and the Seven Dwarfs, which first aired on July 16, 1984, when I was just 3 1/4 years old… 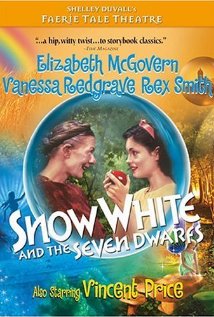 I always really liked Faerie Tale Theatre‘s version of Snow White and the Seven Dwarfs, and one of the main reasons is because it added more to the story than was present in the version most known today, the Disney film. It wasn’t until I was a bit older that I learned that these additions weren’t only creative embellishments on the part of the Faerie Tale Theatre writers but many were actually elements from the original Brothers Grimm version, particularly in regards to the poisoned apple not being the queen’s first attempt on her stepdaughter’s life.

In the older version of the tale, the queen, in the guise of a variety of old peddler women, arrived at the dwarfs’ cottage three times to kill Snow White (who, incidentally, is played here by Elizabeth McGovern, best known today as Lady Crawley in Downton Abbey!). The first time, she brings her a collection of beautiful laces, which she ties around her so tightly, the girl can’t breathe and collapses to the ground unconscious…until the dwarfs arrive home that night and loosen the magical constraints. The second time, she brings her a poisoned comb that seems to kill her as soon as it touches her head…until the dwarfs arrive home and take it out, instantly reviving her.  Only the third time does she bring the infamous apple.

As much as I happen to like the Grimm version, it does however have the fairly significant issue of Snow White not coming across as being particularly bright. After being warned by the dwarfs not to speak to any strangers, she ends up being attacked not once but twice more, and each time by an old woman peddling wares. Faerie Tale Theatre includes some of this additional material in order to pay honor to the Grimm tale, whilst making a wise excision. Namely, the queen only visits Snow White twice, so the young woman doesn’t come across as quite as much of a completely gullible cipher as the original character does. Granted, the queen does look different each time, but asking an audience member to believe that a seemingly intelligent person would allow herself to be fooled three times by “three” old women is definitely pushing it. Furthermore, Snow White only agrees to try the apple after the queen takes a bite herself. This is in the original story, as well, but there, the apple had two distinct sides, a red and a white, and the queen clearly bites the white one. Here, there is nothing so suspicious. The apple looks entirely normal. 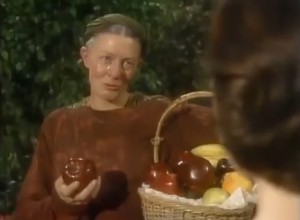 The witch and the apple

The more surprising manner in which the episode sticks to the original version of the story is that there is no magical kiss from the prince to bring the princess back to life. Instead, the prince sees the dwarfs carrying her coffin and, becoming struck by her beauty, goes to her. In the process, the glass casket is jostled, and the piece of apple stuck in Snow White’s throat is dislodged, which awakens her. Interestingly, this removes two potentially troubling aspects of the tale in one go: firstly, the idea from Disney that a prince who had never seen a certain fair maiden before would find nothing odd about kissing her corpse on the lips; and secondly, the possibly even more disturbing implication in the Grimm version, where the prince similarly stumbles upon Snow’s coffin and asks the dwarfs if he might take her coffin from them, because, he says, “I cannot live without looking upon Snow White”. Ummmm, ok, buddy! Then, as his men are carrying the coffin aloft, the piece of apple falls out of her mouth, and so on and so forth. Here, not only is there no necrophilia-infused kiss nor obsession but, instead, he’s simply trying to examine her when the magic apple ceases to work.