And now, years later, I’ve decided to finally revisit this cherished series from my childhood, in order, continuing with the twelfth episode, Thumbelina, which first aired on June 11, 1984, when I was just over 3 years old, and which I had never seen before now… 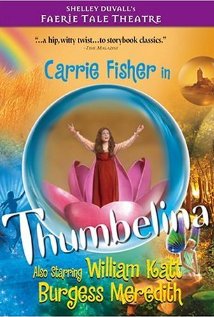 I had a bit of trepidation going into this episode of Faerie Tale Theatre, probably largely having to do with the fact that, other than “The Princess and the Pea,” Hans Christian Andersen tales have a tendency to be traumatic, and I knew that this one centered on a tiny young woman who is kidnapped from her mother, with whom she is never reunited, and who goes through a series of adventures which center on her being repeatedly almost forced to be married against her will to numerous creatures, and, while Faerie Tale Theatre does have a pretty good feminist track record, this seemed a particularly difficult story to get right in the early 80s, not to mention all of the animal costumes and effects work that would be required.

As it turns out, I actually enjoyed the episode a great deal. Although the effects and costumes are low-budget and imperfect, even a tad clunky, they have a whimsical charm to them, and as with the series’ best work, call to mind what one might see on the stage of a small community children’s theatre, albeit one populated by celebrities. Due to the quirky performances by the actors playing characters such as the toads, the field mouse, the mole, and the swallow, the story is imbued with a Lewis Carrollian sense of nonsense. The toads are monstrous but darkly funny, she is rescued by “fish barristers” reminiscent of the fish footmen in Wonderland, as well as the famous trial, and the mole (Burgess Meredith), who spends his life in his musty, underground home surrounded by dusty old books filled with the histories of fallen empires, and who loathes the word “progress”–a pointed satire on classical academics–is also a very Carroll sort of character. And there is, of course, the element of the young girl being whisked off to a number of often frightening adventures in which people drag her here and there, with often little to no care for her own wishes.

Speaking of which, Carrie Fisher is a very appealing Thumbelina. Physically, she is as lovely as the original character, but she gives her a sharper, more modern edge. The episode manages to give her a great deal more personality and–even, to an extent–agency than the girl in the original story. Rather than being a simple victim throughout, she does her best to rebel against her circumstances and to voice her opinion and desires, sometimes in the form of witty retorts, sometimes in fighting against what fate seems to be flinging at her. 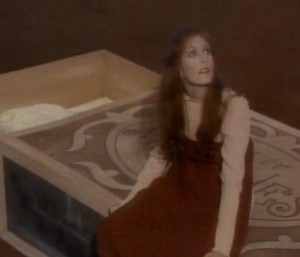 Often, it’s just the precise manner in which Thumbelina’s actions are portrayed that makes the difference. For example, in the original story, after she saves an injured swallow, he later convinces her to allow him to rescue her from marrying the mole. In this version, she at first rejects his offer (which happens before the marriage proposal), because the mouse and mole have been so kind to her that she feels wrong to abandon them, but once she realizes they are going to force her into an unwilling marriage, she herself calls on the bird to return and fly her away from there.

And, in the final sequence, rather than simply agreeing to the Flower Prince’s (played by William Katt of The Greatest American Hero erm “fame”) marriage proposal because he isn’t as horrifying as her past options, an amount of (concise but appreciated) screen time is given to developing their relationship, and even more importantly, she states that she cannot go through with it without getting her mother’s consent, and so the Flower Prince travels into the woman’s dreams to ask her for her daughter’s hand and to finally tell her the directions to where they are located. The mother-daughter reunion is hugely important because it makes Thumbelina’s decision much more understandable and relatable to a modern audience. Even though Thumbelina does marry the prince of her own free will in the original, the fact that she never brings up her mother again makes her seem like a cipher with no inner emotional life, whereas the way Faerie Tale Theatre ends it, the mother plot thread is satisfyingly tied up, rather than left dangling, and Thumbelina is, in the end, given more control over her own story. 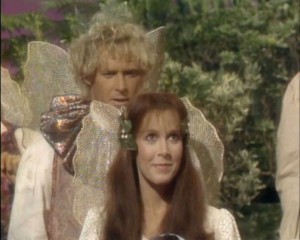 Next: Snow White and the Seven Dwarfs