And now, years later, I’ve decided to finally revisit this cherished series from my childhood, in order, continuing with the eleventh episode, Pinocchio, which first aired on May 14, 1984, when I was just over 3 years old… 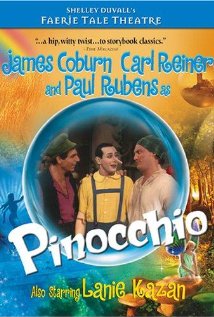 This was another Faerie Tale Theatre I had never seen before now, but it’s likely the only one for which that was a conscious decision. Paul Reubens, best known as Pee Wee Herman, plays that famous wooden boy, Pinocchio, in this episode, and when I was a kid, I didn’t like him at all. Actually, Pee Wee kind of scared/annoyed me, so I was perfectly willing to give this one a miss. Now, however, I’m older, I’ve actually gone on to like Paul Reubens in a number of other things, particularly as Murphy’s obsessed assistant, Andrew, on Murphy Brown (and part of me feels like I missed out on a potentially quintessential part of my 80s childhood in steering clear of Pee Wee all those years, but that ship seems to have sailed), and more importantly, I’m a completist and wanted to experience the whole series this time around. 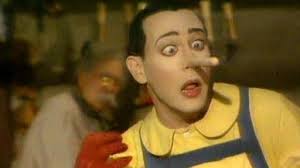 As it turns out, this is not a great episode of Faerie Tale Theatre. This is partially due to reasons of scope. Unlike the many entries that need to expand on the source material in order to fill out a 45-50-minute episode, Pinocchio has the opposite problem. It’s based on an entire novel by Italian satirist Carlo Collodi, which was famously and hugely abridged for the famous Walt Disney version…and the Disney film is twice the length of this production! This means that even some of the most famous set pieces from the story, including Pleasure Island, are removed. The interior of the Whale is also particularly unexciting, even for the show’s generally low budget.

That isn’t to say that there isn’t anything enjoyable left to see here, because it’s actually not a bad way to pass the time. Unlike most American versions, in which Geppetto–here played by Carl Reiner–is the only character to actually have a Sicilian accent, here Pinocchio is one of the only ones who doesn’t, and while the accents the actors put on are certainly ridiculous and over-the-top, they’re also intended to be. My favorite performance is likely Lainie Kazan’s as the Blue Fairy, playing up her thick, fake accent to the nines and generally seeming to have a wonderful time doing it.

And while Paul Reubens could be seen as a bit irritating in spots, that also suits the naughty character well. Since they chose not to go with an actual child, I can’t think of a grown-up actor from the era better suited to playing an overgrown, mischievous boy than Pee Wee Herman. And this time around, they even aged up the character, referring to him as an underdeveloped teenager. The episode also features appearances from Seinfeld‘s Michael Richards (who was also in The Tale of the Frog Prince) and Jim Belushi as two bad guys who try to lead Pinocchio on a bad path, Avery Schreiber as the Boatman, and James Coburn as a villainous–and today, uncomfortably stereotyped–Gypsy, the latter of which knocks the episode down by another notch or three.

Again, not a terrible episode, but it doesn’t bring much new to the Pinocchio table that hasn’t been handled much better elsewhere.

Previous: The Princess and the Pea