Furthermore, although being saddled with a silly, obstinate, petulant child of a prince–at least at the start–wonderfully portrayed by Tom Conti, she completely sells the gradually developing romance between them. That isn’t to say that he doesn’t play a major role in it, too, but in many ways, the burden is more on her to convey how Alecia is both subtly changing him or at least uncovering the sweet guy underneath the bluster, and slowly falling for him, as well.

And although they added a bit of feminism to a number of Faerie Tale Theatres, “Princess and the Pea” is probably the most successful application of that up to this point. At the start, when Prince Richard wants a bride, it is simply because he’s a bit bored and lonely. He sees a wife more as an object to amuse him, and one that must be very pretty, wealthy, of the proper stature, and so on and so forth. He doesn’t even give Alecia a second thought, likely because when he first sees her she’s sopping wet from coming in during a thunderstorm, and he has trouble even believing she’s a princess. 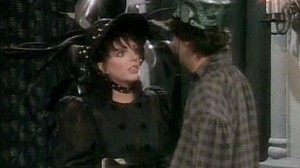 I was momentarily concerned when they first showed a number of potential princesses waiting to be auditioned by his terrifying mother (Beatrice Strange), most of whom didn’t look traditionally pretty–there’s at least one overweight one, for example–that the show might have been slipping in the feminism department, poking fun at these girls who could possibly think that they are Prince Richard’s bride material, yet as it turns out, this was actually done in order to set up the notion that outward looks are no determination of inward beauty. All of the “unattractive” princesses that we see are actually quite kind, whereas the “beautiful,” blonde princess who initially knocks him and his mother off their socks, turns out to petty, cruel, rude, and practically heartless.

And then, of course, through his unfolding friendship with Alecia, the prince comes to learn the shocking truth that actually getting to know a woman and develop a relationship with her before asking her to marry him is a healthier way of finding a potential mate.

This all culminates, of course, with the queen’s test of Alecia, to ensure that she’s a princess, during which she places a pea under a huge pile of mattresses that tower to the ceiling to see if she will be delicate enough to feel it, as any true princess would. 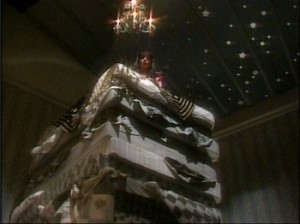 And while this happens in the manner of the original story, the difference is that, when Alecia finds out the truth of why she was asked to asked to sleep in those ridiculous circumstances, she becomes furious at Richard and marches out. Not knowing that it was his mother who had insisted on the test, she assumed that Richard was proving himself to have not learned his lesson after all. From Alecia’s perspective, it shouldn’t matter whether she is a princess or not, and if Richard remains so shallow as to only want her if she has royal pedigree–which she does–she wants nothing to do with him.

After explaining the truth about his mother to her, though, Alecia does come to believe him, but she then demands a test of her own, to prove to her that he is a real prince–a fantastic inversion of the typical fairy tale dynamic, and one that pays off most sweetly.

The episode also features a delightful added character in the court fool (Tim Kazurinsky), who is also Richard’s best friend (a role inspired by a similar character in the Broadway musical based on the fairy tale, Once Upon a Mattress), and even stays true to the original story due to a cute framing story in which a couple (played by the same actors who play the king and queen) visiting a museum discovers the pea on display there and asks the museum guard (also Kazurinsky) about the story. At the end of the original story, the famed pea was also given to a museum.

Previous: Goldilocks and the Three Bears