Another major stumbling block is the production design. Sometimes, Faerie Tale Theatre sets don’t look all that great today, and yet even compared to other sets from the series, the witch’s gingerbread house looks extremely disappointing, fully lacking in the imagination and whimsy I’d come to expect from other versions of the story I’ve seen. It actually looks kind of drab and sparse. I’ve seen low-budget children’s theatre productions with better-looking gingerbread houses. I guess, to a starving child, it might seem to be heaven, which I guess could be the point, but as this is a fairy tale, I would prefer for the series to have conveyed that childlike awe a bit better. 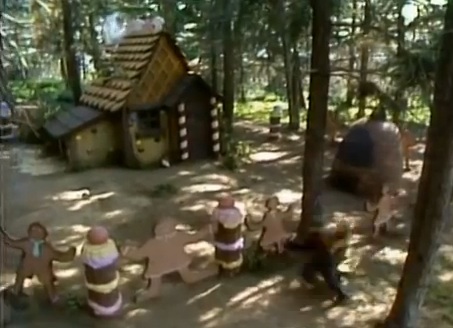 The gingerbread men surrounding the house look similarly terrible. Sometimes, Faerie Tale Theatre‘s dated effects can be charming, but these feel slapdash and even as if their hearts weren’t fully in it, particularly when the spell is broken and the gingerbread figures turn back into children. There’s no sense of joy or elation in the direction. Just POOF! The shot of the gingerbread people are replaced with a shot of the children, none of whom seem particularly excited to be back to themselves, and none of whom even thank Gretel before they all turn around and head back into the forest.

The episode does have its strong points, however, and they are…

a) that it captures the darkness of the original story extremely well. At night, the forest is properly dark and scary, and the children’s fear feels real. And, most impressively, at one point, we actually see the witch leading one of her other child victims into her home, followed by his screams, and then see a thick, gooey batter apparently made up of his heart and other things. But even more than that, the episode nails these characters’ desperation–the overwhelming poverty and hunger that even drives a loving father to consider abandoning his children.

b) JOAN FREAKING COLLINS, who is absolutely amazing in the dual roles of the Witch and the wicked stepmother. If there is one reason to watch this episode, it is her. 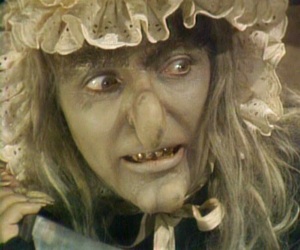 What likely impressed me most about both of her performances are their sheer lack of vanity. Although primarily known–particularly at the time–for playing wealthy, glamourous vixens, such as her signature role of Alexis Carrington on Dynasty, here not only does she seem to be having a ball playing an unrecognizable crone with hideous, warty prosthetics, but the nasty stepmother, as well, trading in her typical high fashion for veritable rags, and yet channeling a similar sort of narcissistic disdain towards the other characters, particularly the children. Here, however, it doesn’t come from greed but from self-preservation. There’s also something that just feels so perfectly right about Collins’ gift for creating deliciously flamboyant evil characters being used in the service of bringing fairy tale evil to life. I mean, Alexis was basically a Wicked Queen in shoulder pads, amirite?

And again, she is wonderfully nasty and shrieky as the Witch–a true diva performance–but I might have been even more impressed by her work as the stepmother. She does such a good job of being horrendous to Hansel and Gretel and yet so nearly obsequious to her husband when she needs to convince him to leave his children in the woods that you almost find yourself thinking she’s making a reasonable argument. Ok, maybe not really, but let’s face it, a scene in which a character has to talk another one into abandoning his beloved son and daughter in a dangerous environment is an incredibly hard sell, both from a writing and acting standpoint, but she makes it not so completely inconceivable that her husband might listen to her, even if only by fairy tale logic. 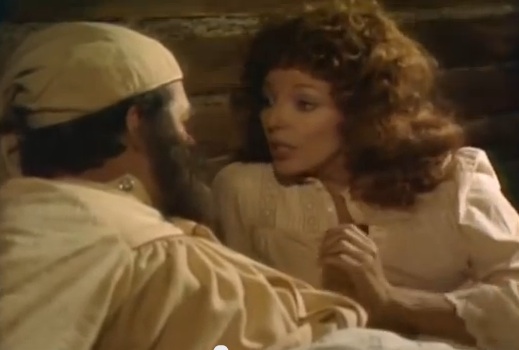 The writing is also very smart here. It has the stepmother convince her husband that someone more equipped to raise and feed the children, such as a prince on a hunting trip, will most likely discover them and take them in, and while this is of course a load of bull–and one could easily respond, then, why not drop them off outside the castle of a neighboring kingdom?–you can almost accept that a desperate, starving man might allow himself to be conned.

Not to say that it isn’t a bit problematic that both adult women in the piece seem so purely evil, while the kids don’t place one drop of blame on their father for what happens to them, but, again, that’s all from the original story. (As is the potential implication that the stepmother and the Witch, if not literally the same person, are at least linked on a symbolic level. In the original story and here, the children return home to find their stepmother dead, which could be interpreted as being due to them having conquered her thematic representative in the woods.) You just have to accept fairy tale logic and the time period from whence the source material came. And at least Gretel grows to be kickass. Or at least she does, when she’s played by a better actress… 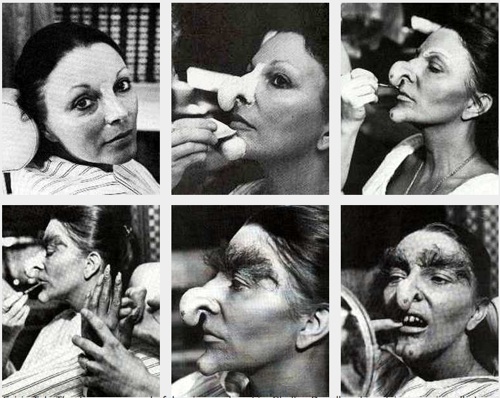 Joan Collins, getting her make-up on.

Next: Goldilocks and the Three Bears