And now, years later, I’ve decided to finally revisit this cherished series from my childhood, in order, continuing with the eighth episode, Hansel and Gretel, which first aired on December 5, 1983, when I was about 2 3/4 years old, and which I’m only now watching for the first time… 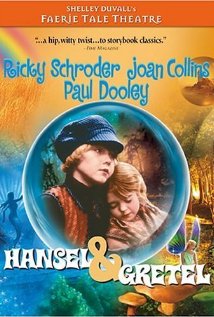 This is another Faerie Tale Theatre that I’ve been waiting my whole lifetime up to now to see but which left me feeling underwhelmed. Since a similar experience occurred with Jack and the Beanstalk, I almost wondered whether nostalgia had been coloring my feelings for the episodes that I did love as a child, and if I might not have liked any of them as much either had this viewing been my first exposure to them, but then I reminded myself that I very much enjoyed Rumpelstiltskin, which I hadn’t seen before now, and that this time around, I actually liked The Nightingale and Sleeping Beauty more than I did as a child and The Tale of the Frog Prince slightly less so, so while nostalgia might play some factor in how heartwarmed an episode I loved back then might make me today, it isn’t solely responsible for my reactions.

And, so, thus reassured, I can say that, in all likelihood, Hansel and Gretel is actually an inferior episode, or at least that there’s a good chance I wouldn’t have loved it back then, either. While I do commend it for, as Faerie Tale Theatre tends to do, staying remarkably faithful to the original story–for example: most adaptations I’ve seen cut the first time that the father and wicked stepmother abandon the children in the woods, when Hansel’s secret path of pebbles helps them find their way home, and instead only show the second, when birds devour their breadcrumb path, leaving them hopelessly lost, whereas Faerie Tale Theatre retains both occasions–this time around, that proves to be to its detriment. Overall, this episode adds very little to the source material. It adheres very closely to it and only demonstrates the series’ usual wit and imagination in fleeting moments.

While watching, I was a bit annoyed with it because in it, Hansel is the older brother who mostly takes care of his younger sister. He comes up with both plans to try to get them home before they stumble upon the witch’s lair, and I had always thought that Gretel was the older, stronger, smarter one throughout. As it turns out, I was actually wrong. I re-read the original Grimm story to check my facts, and it just so happens that Hansel is the protector for the first half of the story. Gretel spends a great deal of the time crying. It’s only after Gretel tricks the witch and pushes her into the oven that she finds her confidence and becomes the star of the story, later even getting them out of the forest when Hansel despairs, by calling out to a white duck, asking her to let them ride on their back across a river (this latter sequence isn’t in the episode). And so I have to withdraw that complaint. 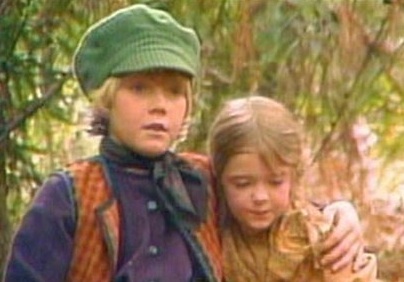 However, what remains a problem is that the little girl who plays Gretel–while sweet and actually not overly cloying, for a child actress–isn’t a very good actress, often seeming more like she’s reading lines. Ricky Schroeder fares much better as Hansel, but he was also a little older and more experienced in acting at the time. The girl, however, fails to convince when she suddenly outsmarts and overpowers the witch, leading me to think that it might have been better for the series to take their usual route here of casting a little older. I don’t think this story would’ve worked as well with adults, as some of the other stories did, because the children’s vulnerability is so important to the dramatic arc, but perhaps young teenage actors might’ve been preferable.