Faerie Tale Theatre finds its own very interesting and intelligent balance by making the Wolf–played by Malcolm McDowell, who was Steenburgen’s husband at the time!–an almost fully comedic figure, a mostly bumbling, mostly incompetent Cockney-accented predator (why, when he first meets Granny, when she’s on her way to Mary’s birthday party, the old woman ends up beating him with her cane, and even the second time, she has a hidden rifle with her in bed, which is just so Faerie Tale Theatre, a rifle that–unfortunately for her–misfires) whose plans only seem to work, when they do, by accident, and usually not for very long, at that. Although the idea of the Wolf as a darkly sexual being isn’t fully eliminated, it is largely obscured here. There are only two times when he’s legitimately scary, each of which is, significantly, a moment before he devours each of the women (which itself could be seen as a surreptitious comment on the fact that many rapists may seem innocuous or harmless at first glance). McDowell navigates all of these shifts beautifully, from funny to frightening. It’s really a fantastic performance. 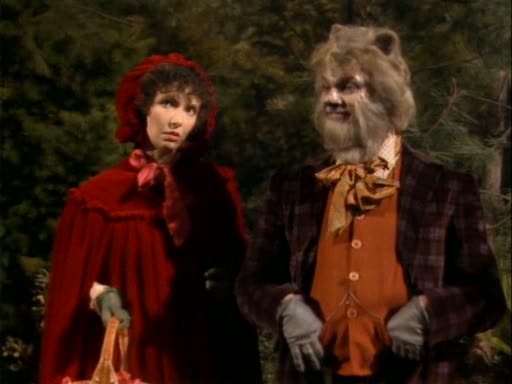 Little Red and the Wolf

At the same time, however, as contrast, the episode also gives Mary a love interest in the form of a young woodcutter named Chris (Darrell Larson), who begins working for her father, who has worked in the profession for many years. At the start of the episode, it seems that her dad might be the one who ends up rescuing her from the Wolf, but the fact that it ends up being this boy instead is extremely significant. Metaphorically, she isn’t simply being protected by a parent, retreating back to her family after wrongfully straying from the path, but instead replacing the Wolf with a new, more healthy relationship, one from which her father had tried to prevent her up to that point. 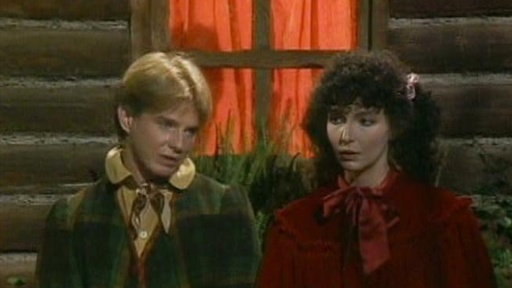 For, you see, what might be the episode’s smartest innovation is in making Little Red’s parents both well-meaning but overbearingly over-protective of her. While, at first, one might think it strange that an at-the-time 30-year-old woman is playing Mary, it actually serves to underline the fact that this young woman has outgrown the way her parents treat her.

Throughout the first half of the episode, they both basically infantilize her, as if she were a little girl, and are extremely restrictive in their rules as to what she is allowed to do, which is basically nothing. She dreams of leaving home and exploring far-off lands, such as the people in the fairy tales she reads–one of which, amusingly and significantly, is Rapunzel, which Faerie Tale Theatre had already covered, and which is also a story of a girl who is being kept under virtual lock and key by a parent, in the name of her own protection–but they discourage her and her imagination at every turn. She doesn’t even have any friends, and they like it that way. It’s safer. Therefore, her father is distinctly displeased when she starts to show interest in his new apprentice, Chris, and it isn’t till Chris saves her at the end that he relents on the issue.

And so the episode contrasts Mary’s developing flirtation with Chris with her brush with danger, in the form of Reginald Von Lupin, the Wolf, arguing that it isn’t necessarily Little Red’s fault alone for having fallen for his lies, as it basically is in the original story–in which all we know about Red’s relationship with her parents is that she had expressly ignored her mother’s explicit warning not to stray from the path–but mainly her parents for having been so smothering and domineering as to never allow her to make her own mistakes for herself and to learn from them in the past. Mary listens to the Wolf, despite her better judgment, because it’s the first taste of excitement she’s ever had. She allows herself to be convinced to break the rules, because she has spent years suffocating and so this little rebellion feels good, all of which serves to make this version of Little Red Riding Hood a much more fascinating story, particularly from a character basis, than in the original Grimm. 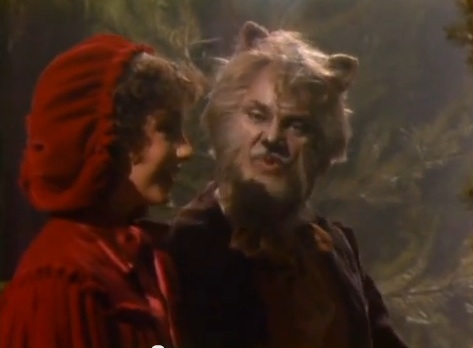 Little Red and the Wolf

For one potentially negative criticism, I did find it a bit jarring that the narrator at the end basically reasserts the moral of the story as being to not stray from the path, especially since straying from the path ends up being the catalyst for real change in Mary’s life finally, but seeing as that, in the end, she is strolling down that very path with Chris, having won her victory against her parents and their control, I’d say that it’s also likely that the episode was presenting that moral with a healthy dose of irony.

This episode is also a very good example of how Faerie Tale Theatre could manage to tweak a story to have a more modern message while not altering the basic flow of the original. In other words, although there are additions, nothing goes against what happened in the source material. For example, Little Red doesn’t somehow save herself. She is rescued by a man, as occurs in the original, along with many old fairy tales. However, since the story is reframed as being more about a conflict between her parents and her, the revisions allow her to take charge of her own life, firstly in the form of her rebellion, the exact form of which might have been unwise but which, at the same time, was probably the right thing to do, in principle, and secondly in ultimately getting what she wanted all along, which, although it’s represented by a boyfriend, also symbolizes on a broader scope Mary asserting her newfound adulthood and maybe even capacity for eventually having the sorts of adventures she’d always dreamed of.

Also, significantly, filling the wolf’s belly with stones is her idea. Not so helpless, after all.

Previous: Jack and the Beanstalk

Next: Hansel and Gretel