You see, the Prince longs for a romantic partner who is kind and charitable, but this Princess doesn’t give a fig about the poor. The sequence culminates in a frankly amazing scene in which she demands that he bite the pearls off of her outfit, promising that each pearl he takes off of her, he can then give to those who need it, only for him to discover after doing this quite erotic act that she has hoodwinked him. They aren’t real pearls at all but rather costume jewelry, which leads to the next surprise–GASP!–she isn’t a beautiful princess at all but Henbane in disguise, attempting to ward the Prince off of seeking any other pretty girls in towers. 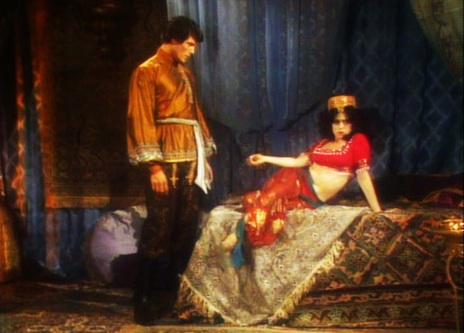 The Prince and the Bad Princess

The Prince’s tale done, the woodcutter resumes his story, with Sleeping Beauty now at the age of 20 and about to be married off to a Prince from a foreign kingdom. Here, Peters is a sharp contrast to her earlier character, positively glowing with loveliness. At this point, she even sings a classic showtune, “I’m Nobody’s Baby,” which I’m of two minds about. On the one hand, the lyrics of the song do make her seem more of a regressive, marriage-focused princess than the rest of the episode might suggest, and it being a very slow-tempo number, it does mess with the show’s pacing quite a bit. On the other hand, I’m not one to ever scoff at the opportunity to hear Bernadette Peters sing, particularly such a classic song, and she, naturally, sings it absolutely beautifully, with such longing and care. Ultimately, I’m glad Shelley Duvall and her people realized that you don’t invite Bernadette Peters onto your fairy tale show and neglect to have her sing, even if I might’ve gone with something a bit more lively/feminist.

(Sidenote: It’s kind of amazing to consider that this episode, in which she plays the young princess, was filmed only about 3 years before she would be starring as the Witch from Rapunzel in Stephen Sondheim’s much beloved fairy tale musical, Into the Woods.) 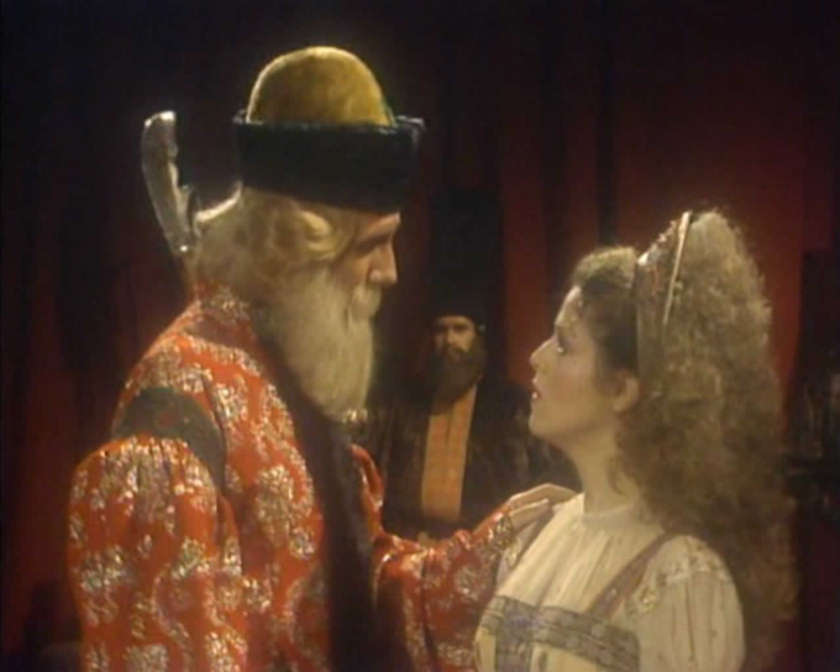 The King and the Princess

Soon after singing her song, however, she realizes she should have been more precise about just whose “baby” she might want to be, because the Prince who has consented to marry her is an absolute nightmare. Reeve plays him as a comedically loathsome fop (and seems to have a ball doing it), dressed like a colonial English governor in the New World, all buckles and curly hair. Not only is he a sniveling coward, but we actually see him kick a peasant, limping on a crutch, to the ground, making him a perfect potential match for the evil princess…were she not an illusion, that is. Though, who knows, perhaps he is, as well. Either way, it inspires our Princess to run up to the tower, where she has her ultimate appointment with a spindle.

And why, might you ask, are the king and queen so eager to marry her off to such a horrible person? It’s actually the center of an extremely clever twist wherein it turns out that Henbane’s curse only extends as far as the limits of this particular kingdom, and so were the Princess to be wed off and taken elsewhere, she would escape the coma all together.

The story then winds down in generally the expected way. Now, a century or so later, the Prince, after the woodcutter finally completes his tail, decides to rush off to the castle, where he fights through the brambles and thorns, awakens his Sleeping Beauty with a kiss, and so on and so forth. On his way in, he fights a giant, which is actually Henbane, transformed into an enormous samurai-looking creature with scaly skin and enormous nails. And their battle occurs in front of a green screen projecting imagery of soldiers in combat. It’s very surreal and thoroughly amazing–sure, in an awwwww, the 80s way, but amazing nonetheless. 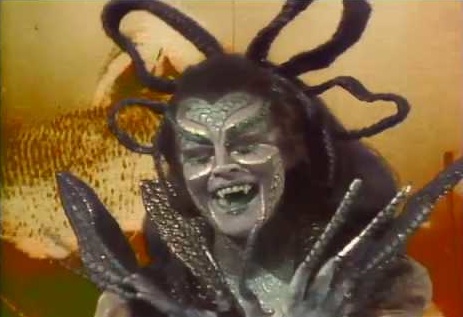 You also have to love the Carol-Kane-fairy’s-putting-the-entire-kingdom-to-sleep spell, because they literally just pause the video on castle people in the middle of various actions, such as a chef tossing salad, or servants in the great hall dropping a tablecloth onto a table, and then restart it as soon as the spell “lifts”. I heart these adorably awkward “camera tricks” so much, as well as them getting yet another double entendre in when the fairy first says, “Then, you all will be sleeping together…in a manner of speaking.”

All in all, a rather different spin on Sleeping Beauty, but I also rather love it, particularly this time around. After a number of mostly traditional fairy tale adaptations, it’s nifty to see them playing with the format a bit, and it paves the way for what I recall are some even better plotline expansions in later episodes. Also, I mean, I just watched Superman with an English accent awakening Bernadette Peters with a kiss. How could I not be in sheer bliss right now? 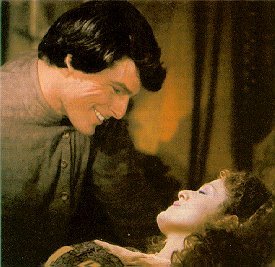 Next: Jack and the Beanstalk