Another thing: whereas the original story begins with a queen longing for a child but who cannot seem to conceive, until a frog appears one day and tells her that she will have a daughter in one year’s time, this version begins with a queen–played by Sally Kellerman–who is simply unsatisfied with her life but can’t seem to figure out why. It isn’t until a fairy pops out of a jewelry box to tell her firstly what she needs to make her happy, and secondly, how to go about doing it. It would seem that, neither the king (Rene Auberjonois, in his second role as a king on Faerie Tale Theatre, the former being in The Tale of the Frog Prince) nor queen had any idea how a child comes into the world until the fairy mischievously whispers it in the queen’s ear, she then delightedly whispers it in the king’s ear, and then they lift the covers over their heads to try the fairy’s advice on for size, so to speak, which I love for numerous reasons, including

(a) that once again, the show is injecting some adult humor underneath the surface;

(b) the idea that these monarchs have no idea how to create a child feels so terrifically fairy tale; and

(c) perhaps most fittingly with this episode’s theme of storytelling, the queen is actually about to read her husband a bedtime story from a book of fairy tales before the fairy interrupts them, suggesting they may have to skip reading this one night. In other words, this fairy tale begins because (the reading of) another fairy tale was interrupted, just as the telling of stories is interrupted numerous times in the framing narrative.

And then, we get to the infamous christening party, which also features some wonderful twists on the norm. Firstly, among the numerous fairies, one of them is a flamboyant, gossipy, catty, bearded male one who is an absolute delight. Among tons of great one liners, my favorites are when he responds to the “wicked” fairy–here called Henbane and played by Beverly D’Angelo (quite the star-studded 80s production this episode was!)–upon hearing her curse that the child will prick her finger on a spindle and die, “Henbane, you are one sick fairy,” and, in response to the fact that she got so worked up over the king and queen forgetting to invite her and then not having enough table settings for her that she placed a curse on the girl, “Well, I don’t see what all the fuss is about. She could have had my dish dome!” 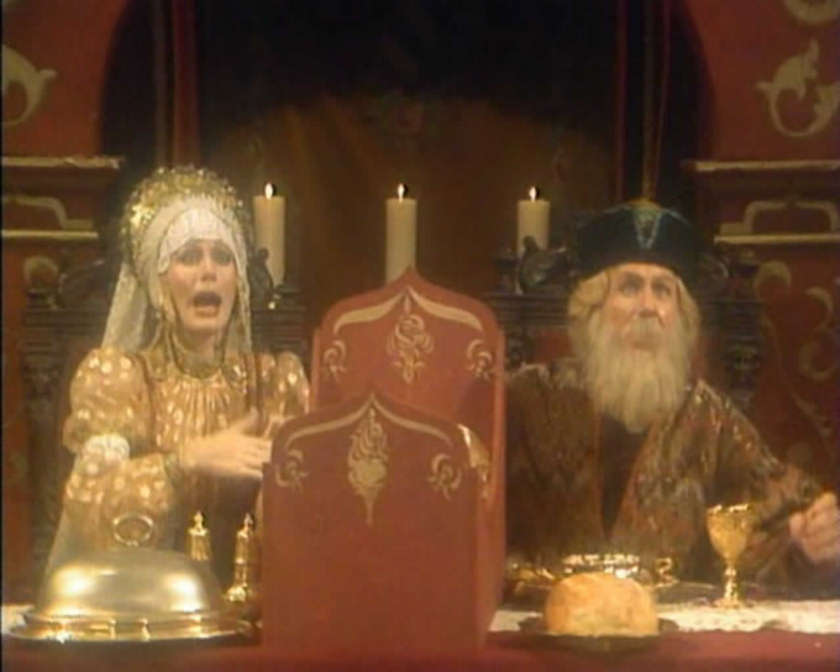 Speaking of which, the episode takes an interesting route in that the fairy isn’t a terrifying force of malevolence, as Disney’s Maleficent is. However, just like Maleficent, she is fully driven by the principle of the thing. She doesn’t hate the child for any particular reason. She is simply demanding reparations for having been socially slighted. Henbane (called Carrabosse in the Grimm version) isn’t even ever labelled as a wicked or bad fairy. In fact, at one point, the good fairy played by Carol Kane points out that she isn’t a bad fairy, so why is she behaving this way? And, again, it all just comes down to irritation at having not been given the proper courtesy and respect that she is owed. In earlier mythology, fairies could be very mischievous, mercurial, and dark creatures, completely devoid of human morality, and this is closer to that concept of fairies. Plus snarky dialogue.

Two other things before we move on: the reason that the final fairy still had a gift to give the baby that ultimately counteracts Henbane’s is that, while everyone else was handing out their gifts, she was off using the facilities, which I love and is so very Faerie Tale Theatre; I also love that one of the fairies decides to give the child the gift of bravery, which the king scoffs at, not understanding why a girl would need such a quality. Beauty, wisdom, wit, musical talent, etc., sure. But bravery? Only boys need that, according to the king. Which makes such a great point about gender expectations, particularly in fairy tales. Unfortunately, this thread isn’t fully followed through. We never get to see Sleeping Beauty be truly badass, though we do see her stand firm when it comes to refusing to marry the bad prince, which I’ll get back to in a bit. But, either way, the sentiment is nice.

At this point in the present day, the Prince interrupts with his own story about how a vision of a beautiful princess awaiting him somewhere spurred him to go off with Squire Tuck to foreign kingdoms, in an attempt to find the girl for him. Reeve is patently fantastic in the role of the dashing prince, imbuing his part with all of commanding presence of his Superman, with an added sense of noble, princely charm, and an English accent to boot. In this flashback section, he wanders into what seems to be a kingdom out of the Arabian Nights, with Sally Kellerman now playing an evil queen trying to con him into marrying her spoiled, greedy daughter, played by Bernadette Peters as simpering and flirtatious, with a vicious streak lurking underneath.