And now, years later, I’ve decided to finally revisit this cherished series from my childhood, in order, continuing with the fifth episode, Sleeping Beauty, which first aired on July 7, 1983, when I was just about 2 1/4 years old… 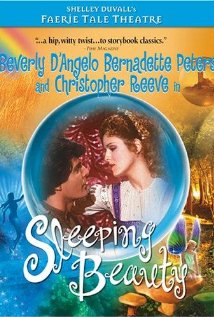 As Faerie Tale Theatre went on, the creative team started to take more liberties with the source material. That isn’t to say that they ever disregarded the original intent or thrust of a story, and in fact, more often than not, all of the core details remained the same, however they grew a bit more creative in how they expanded these brief tales into 45-minute-to-hour-long episodes. Whereas The Tale of the Frog Prince at times felt a bit strained, with numerous scenes that were clearly there to fill out the runtime but didn’t seem to add much of substance, Sleeping Beauty finds a much more imaginative way to extend its slim story, and interestingly, it’s one that I found a bit odd and uncomfortable as a child but which I really enjoyed this time around.

In some ways, this episode feels rather experimental and ahead of its time, at least as far as child-oriented television storytelling generally goes, because rather than telling the typical, linear story, it is constructed almost as a series of tales within tales, like Russian nesting dolls, beginning nearly at the end of the main story, with the Prince nearly arrived at the enchanted castle, and then pulling back through various flashbacks, at times interrupting the story of Sleeping Beauty, whose name is never given in this version, in order to tell the backstory of the Prince, whose name is also never given. And as with Rapunzel, the leads, here Bernadette Peters and Christopher Reeve (!!), each play dual roles, each at one point taking on the part of a bad princess or prince, as well as the good characters we know from the Grimm.

The episode even opens meta, with a Russian woodcutter telling the story of the time he told a story of Sleeping Beauty to two men in the woods, these two men being the Prince and his Squire–played by Alias’ Ron Rifkin and whose name is, amusingly, Squire Tuck–and who at the start  have switched places in order to conceal the true prince’s identity. And before long, the woodcutter is regaling them with the story of how Sleeping Beauty came to be born.

Now, a few things about said story. One thing I particularly love about this episode is that the Faerie Tale Theatre team decided that, in addition to utilizing the score from Tchaikovsky’s Sleeping Beauty ballet–in a similar manner to the Disney film–they would go one step further and set the story in Russia, or at least an atmosphere that calls Russia to mind, with a castle that looks very much like classical Russian architecture, with flame-shaped towers.