And it’s hard to blame her. The king is kind of an asshole. Played by Ned Beatty (yes, really), there is absolutely nothing likable about him. After demanding a wife worthy of him, he finally discovers one who just might be magical and so…he locks her in a tower and threatens her into performing her feat for him, but doesn’t feel she made him quite enough gold, so makes her prove herself again…and yet one more time? No wonder she doesn’t think he’ll ever be satisfied. 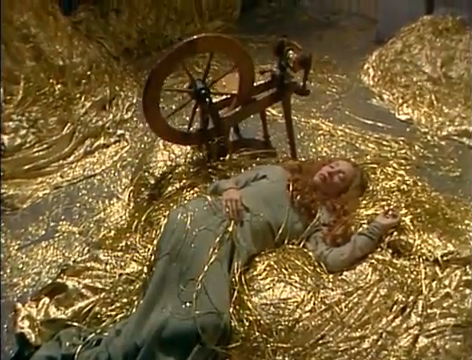 One of the smartest things that the episode does, then, is to refuse to sell this as some sort of touching love story. Faerie Tale Theatre was not a fractured fairy tale show or one that completely revised old stories. Instead, however, it retained the original thrusts of each story but sometimes gently tweaked them to fit more modern sensibilities. And so while someone writing the story today might have tried to soften the king or make him less of a beast, Faerie Tale Theatre trusts the original story to work the way it always did. It understands that fairy tales aren’t based in real world logic but dream logic. And so it never endeavors to explain why the king makes these decrees or why Rumpelstiltskin happened to appear for the miller’s daughter that first time or why he later agrees to let her out of the bargain if she guesses his name. And that’s as it should be.

But it does allow a little bit of modern-day commentary to slip through. Firstly, the Miller’s Daughter is never shown to fall head over heels for the king. In fact, the only passionate remarks she ever makes about him are ones of exasperation at how he’s treating her, when she’s locked in each of the three sequential rooms. She seems happy enough to finally accept the crown, though that largely seems to be relief over not having to spin any more straw into gold for him (though, again, if this employed real-world logic, you’d think the king would be forcing her to do that for him day and night, now that he’s secured such a seemingly reliable cash cow), and one of the most delightful scenes in the production is a little one in which she’s skipping around the castle with the crown and accidentally drops it, then picks it up again, humming all the way. She ultimately, however, loves the baby she gives birth to far more than she does its father. 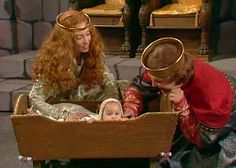 And that leads to her being far more proactive about protecting her child than the new queen in the original Grimm story was. Rather than simply sending a messenger out to track down the gnome’s name, she goes out and seeks out an answer herself, even traveling into a dark forest so dangerous it’s known as Dangerous Forest, where even the grown men in her guard refuse to wander at night in a group. She, instead, does it by herself, and hangs with her old buddies, the raccoon, the rabbit, and the unicorn…and ZOMG, this unicorn…is a brown Shetland pony with a horn stuck on its head. It’s…AMAZING. And he leads her to a small house where Rumpelstiltskin and a bunch of his other little friends are singing a song about his name. Naturally. What’s important, however, is that this wispy little space cadet of a queen succeeds where no man was able to, and procures the name by herself, and is able to save her child by herself.

Though before she finally gets it, her guesses as to what his name could be are all pretty priceless, too.

Lastly, I have to mention the video effect where Rumpelstiltskin, so frustrated that she was able to “guess” his name, stomps his right foot so hard that, in the words of the original story, “it went into the ground above his knee; then he seized his left food with both his hands in such a fury that he split in two, and there was an end of him.” Well, if I didn’t know that that’s what the show was meant to be depicting, I’m not sure I ever would have figured it out. As it transpires on Faerie Tale Theatre, it’s just basically a fade effect that goes from the center of his chest outwards, so it’s not really clear if he’s died or just made himself disappear in a strange way or if he’s been teleported somewhere…Anyway, ’80s TV effects. What can ya do? 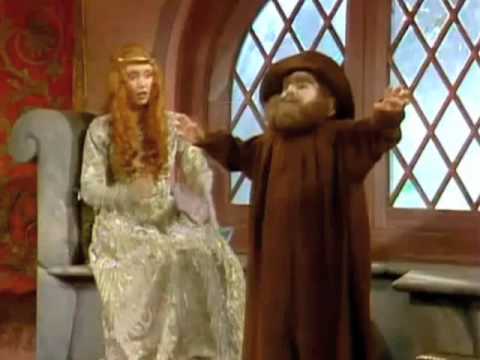 Previous: The Tale of the Frog Prince