And now, years later, I’ve decided to finally revisit this cherished series from my childhood, in order, continuing with the second episode, Rumpelstiltskin, which first aired on October 16, 1982, when I was just over 1 1/2 years old, and was one of those episodes that I never got a chance to see, growing up… 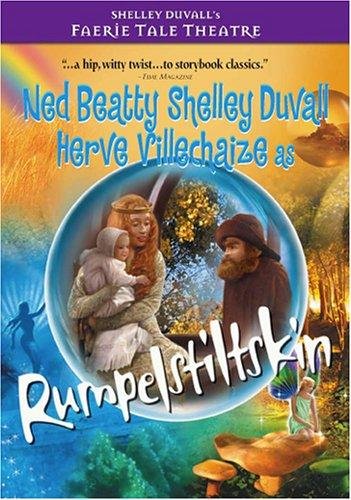 I get the sense that, if I had first seen Rumpelstiltskin when I was a kid, it would not have been one of my favorite episodes, and this is largely because, as the eponymous trickster, Hervé Villechaize (best known as Tattoo on Fantasy Island) is pretty terrible, with a nearly unintelligible accent and a demeanor that comes across as more whiny than menacing. Let’s just say that Robert Carlyle on Once Upon a Time he ain’t.

With that said, in her first acting role on her own series, Shelley Duvall makes a fantastic Miller’s Daughter, though due to Once Upon a Time‘s brilliant but completely revisionist spin on that particular character, it’s probably best to put that show aside for now, because this isn’t the shrewd, scheming, powerful witch who gave birth to everyone’s favorite evil queen, Regina, but the simple country girl of the original story, who’s rather horrified to learn that her father has been lying to the king about her abilities, namely that she can spin straw into gold. One of Duvall’s signature traits as an actress is her space cadet-iness. She always seems like she’s on a slightly different plane than anyone else–a very nice, lovely plane, certainly, but a different one, nonetheless–and here she uses that to her full advantage, nailing the bewilderment of this poor young woman who just wants to go back to her house and frolic with her talking animal friends (yes, she has talking animal friends) but is instead being forced to perform an impossible feat on threat of death.

One of my favorite bits of the episode is that, whereas most other versions of the story focus on the impossibility of spinning straw into gold, this one explicitly points out that you don’t even have to get to the end of that phrase to reach the impossible part. Spinning straw alone is impossible. Duvall tries over and over again to simply get handfuls of straw to stay onto the loom and can’t even do that.

As with The Tale of the Frog Prince, this series truly has the rhythms of classic fairy tales down. After the first night proves to be a success thanks to a little help from her thick-accented little friend, the king immediately forces her into an even larger room full of straw for a second go at this gold-spinning thing, and then again for one final night, during which she finally bargains away her first-born child if she becomes queen, not because she’s as foolish as the girl in the original story might seem but simply because she doesn’t think that the king will actually marry her.