Hello, everybody and welcome to the Farnsworth Society, where we, as a group, re-watch television shows that are dreampunk, steampunk, cyberpunk, anypunk-related and meet weekly to discuss each episode one at a time. Our first show is the steampunkalicious Warehouse 13 (it only seems fitting to begin the Farnsworth Society with this show, doesn’t it?). Today, we’re covering the fifth episode, “Elements”. And please fill up the comments with your own thoughts, remembrances, favorite things about the episode, absolutely anything. And, yes, spoilers for any other aired episodes from Seasons 1-3 are allowed. We considered making it spoiler-free, but then decided it would likely constrain conversation far too much. Let’s get to it, kids!

I’m going to just come right out and say it: “Elements” is not one of my favorite episodes of Warehouse 13. While never out-and-out bad or completely unentertaining, there’s something a bit flat and underwhelming about the main plot. It was a little more exciting to see Joe Flanigan as Jeff Weaver this time around, because it was the first time I’d rewatched the episode after seeing Stargate: Atlantis. Still, his character isn’t particularly meaty, and the story about an old rich white guy trying to take over the world or something with Native American art just doesn’t seem to have much to it.

With that said, this is still Warehouse 13, so it does manage to have its moments. I really do love the buckskin coat and its ability to allow its wearer to walk through walls. Not only is the effect itself very cool but that initial imagery of the feather stuck halfway through the wall is a great, indelible image–arguably the thing I always remember most about the episode. Pete’s reaction to his arm passing effortlessly through solid matter is wonderful, and his fight scene in the back of the truck is equally thrilling.

I also love Pete and Myka’s continued teasing of one another each week regarding the chemistry each tends to have when interviewing members of the opposite sex, and, as I said in past weeks, appreciate that the show devotes equal opportunities for both of them to flirt with attractive people. Their banter in the hospital is also great, the two of them getting more and more comfortable with each other. There’s a natural ease to their chemistry and it really comes out in that scene, with Pete telling Myka she’s pretty when she smiles and Myka teasingly asking what that means regarding how she looks the rest of the time. And the reason it really works is that Pete isn’t flirting with her, which makes his initial compliment even more touching. He’s not trying to get in her pants. He’s just being honest.

Also, Myka’s conversation with Jeff about his father resonates with her issues with her own father, which is really interesting to watch. Joanne Kelly is fantastic at hinting at that subtext, without overplaying it. 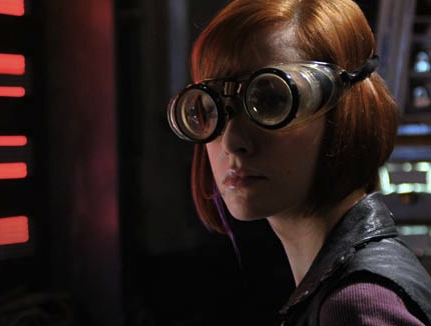 Really, the best parts of this episode, though, don’t involve our main team at all but are set back at the Warehouse and at Leena’s. Everything from Claudia simultaneously trying to push her brother out into the world in order to justify the time she spent trying to save him while also being afraid of his leaving and not knowing what to do next with her life, to Leena calling her on that, to the early development of Artie and Claudia’s father-daughter relationship is pitch-perfect, particularly the chess game. These two can get on each other’s nerves, but, as Leena points out, it’s often because of how similar they actually are to one another, much as in a real family. Alison Scagliotti and Saul Rubinek are just so great together. They ruffle each other feather’s and get on each other’s nerves but underneath it all, they need each other–much like Claudia and Joshua, whose goodbye scene is also touching but not overdone. This episode is definitely indicative of early Season 1 episodes, where Warehouse 13 sometimes seems to be divided between the Pete/Myka show and the Artie/Claudia show, before Claudia starts being integrated more regularly into normal missions. This makes sense, though, given that she is still new, and they haven’t yet all settled into a big, happy family yet. It’s neat to watch that gradually develop, though.

Favorite Scenes: As previously mentioned, Pete and Myka in the hospital. The feather. Claudia making a move on Artie’s chess game.

“Pete, you’re not gonna believe this, but I smell fudge.”–Myka

Continuity: Joshua goes off to work in Cern. We’ll see him again at the start of Season 2, and in the first Christmas special. Also, when Pete is lying in his hospital bed, the buzzing of the Farnsworth wakes him up and his first word is a hazy “Mama?” In light of the revelation about Pete’s mom’s identity, this can be seen as (I’m assuming unintentional) foreshadowing!

What do you think of this episode? Do you agree with me that it’s one of Season 1’s weakest, or do you have a fondness for the main plot that I’m just not appreciating?