Bryan Fuller’s Hannibal is an absolute nightmare, and I mean that in the best possible way. At first glance, it might seem odd that a showrunner most known for comedic and darkly whimsical fantasy series, all of which were cancelled too soon–Wonderfalls, Dead Like Me, Pushing Daisies–could produce such a macabre, grotesque yet strangely beautiful work, laden with such menace and dread. And yet, the more I thought about it and the further along the first season proceeded, the more sense it made. Fuller’s work has always grappled with existential crises and pondered the deeper mysteries, focused on the push and pull between life and death, found black humor in such, featured a heightened or surreal reality, and handled human triumph and sadness with remarkable depth.

Although, on the surface, Hannibal‘s tone is a far cry from his previous shows–I can’t remember the last time I found a television series so relentlessly unnerving on such a consistent basis–they have a lot more in common than meets the eye. Fuller has always had an eye for the grotesque. In fact, Dead Like Me, Pushing Daisies, and Hannibal all often feature death doled out in imaginatively bizarre ways (meanwhile, the pilot for his Munsters spin-off that was sadly not to be, Mockingbird Lane,was also wildly, deliciously macabre). True, the deaths and corpses in his earlier shows are more along the lines of those in the waiting room of Tim Burton’s Beetlejuice, comedically exaggerated enough to produce laughter more than genuine horror–I mean, remember the temporarily reanimated, deep-fried-chicken-batter corpse on Daisies? Gross and hilarious–whereas Hannibal‘s bodies, even when at the center of operatically grandiose set pieces (Fuller has called the show’s often grandiloquently splayed corpses “purple opera,” which I love) always look viscerally, wince-inducingly real, but at their heart, they spring from a similar place. 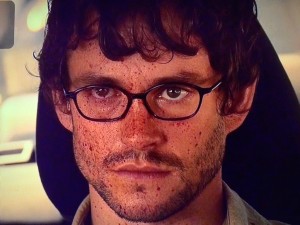 Futhermore, the series’ main protagonist, FBI profiler, Will Graham (Hugh Dancy), has a great deal in common with the protagonists of Fuller’s previous shows. Put most simply, Fuller’s main characters tend to be damaged people trying to find their place in the world who just so happen to have some sort of magic power, somehow related to the Big Questions. Jaye Tyler in Wonderfalls was an overeducated underachiever who suddenly found that animal-shaped objects–mostly tchotchkes in the Niagara Falls souvenir shop at which she worked–were speaking to her, delivering cryptic messages that may or may not have been the voice of God. George (short for “Georgia”) Lass in Dead Like Me was a similarly highly intelligent slacker who lost her life before she ever really got a chance to live it (having been blown up by the flaming wreckage of a toilet seat from a space station that plummeted to Earth), but rather than moving onto the next plane, was recruited to be a Grim Reaper, helping deliver recently deceased souls to their next destination, without ever herself knowing what that next destination precisely was. Ned from Pushing Daisies was a seemingly innocuous piemaker with a traumatic backstory related to his ability to bring the dead back to life, at least temporarily, and who used that special skill to help solve murders.

Will Graham, who first appeared in Thomas Harris’ first Hannibal Lecter novel, Red Dragon (Oh, did I forget to clarify for those who may not have realized that this show, at least at this point, is a prequel to the Lecter novels? Hannibal as in Hannibal “the Cannibal” Lecter, of The Silence of the Lambs fame?), also has a “magic power” of sorts, or at least an uncanny ability that defies traditional reason or logic. Due to the unique way his mind works–he’s apparently on the autism spectrum, which in his case gives him an unparalleled gift of empathy–he is able to look at practically any corpse and, in moments, visualize and reconstruct precisely how that person died, from the killer’s point-of-view, and to grok that killer. Although the adjective, “magic” is never uttered, for all intents and purposes, it is a superpower that others can’t understand or quantify. 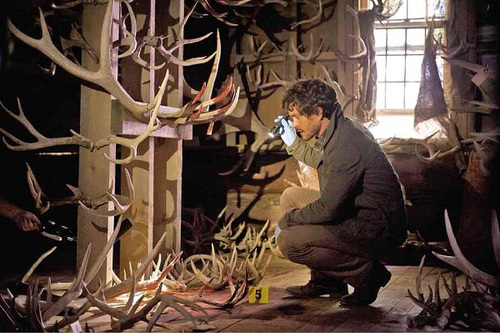 While so many mystery shows and stories are built on the Sherlock Holmes model of a master detective walking into a room and wowing people with his intricate ability to take note of the tiniest, most seemingly insignificant details and thereby solve a case, and where a great deal of the “magic trick” is in said detective laying bare for the other people in the room–as well as the audience–just how he pieced it together, Will is the opposite. He doesn’t know why he knows what he knows. He basically goes into a trance state and just intuits it. And he’s almost always right. Furthermore, this ability to see such grisly visions from the minds of such ugly killers is slowly tearing him apart and causing him to gradually lose his sense of identity and self. In many ways, he can be seen as a dark mirror to Ned the Piemaker, but rather than literally resurrecting a corpse to learn the cause of its death, he rewinds the entire scene in his own mind, casting himself as the villain.

And as an unabashed fan of everything Bryan Fuller, this is what attracted me most to Hannibal. What at first seemed so foreign and alien to everything else he had done suddenly opened up to me when I realized that this entire show is actually a dark mirror to the universe of his other shows. Although Wonderfalls, Dead Like Me, Pushing Daisies, and Mockingbird Lane all have some notable stylistic differences, they have a great deal more tonally in common than they don’t, and furthermore, even have numerous hints that they occur in the same overall world. For example, the muffin-baking Marianne Marie Beetle (played by the brilliant Beth Grant) from Wonderfalls makes an appearance on Pushing Daisies, in a cooking competition episode, and the Mockingbird Lane pilot, and in another Daisies episode, Chuck works undercover as a temp employee for Happy Time, the very agency that George works for on Dead Like Me.  They are all so far removed, however, from the overwhelmingly brutal world of Hannibal–particularly Pushing Daisies‘ candy-colored fantasia of a visual palate—that I never would have initially imagined that it could be part of the same shared universe, too.