Some characters are so larger than life, they seem to eclipse any literary work that attempts to contain them. There are two such characters in Jonathan Barnes’ two novels, The Somnambulist and The Domino Men, the latter title of which is an alternate means of address for these two mercurial beings who appear in both stories despite the fact that the first is set in Edwardian London and the second in contemporary London.

These two human-shaped figures, Hawker and Boon, most often referred to as a unit, the Prefects, are quite the terrifying concoction. Violent, remorseless, devoid of morals, utterly alien, immortal, uncontainable, and eternally childlike, the Grimm-esque Prefects wear the countenances of grown yet youthful men in the clothing of Victorian schoolboys and kill indiscriminately and gruesomely, speaking in the tone and cadence of young children having a bit of a laugh even as they tear literally hundreds of people to shreds in sixty seconds or less. They are reminiscent of a nineteenth-century twist on Batman’s Joker, if the Joker was more deadly and had the powers, stamina, and lifespan of a god.

What is most interesting and so scary about them is that they are impossible to grok on any level. They enter each book for only a brief span of time (even in the one ostensibly named for them), dance around with the carefree glee of mischievous boys made of snips and snails and puppy dog tails, wreak their grisly havoc on the residents of London unfortunate enough to cross their paths, and then once more make their exit, impossible to grasp or understand. Even more fascinating is that they aren’t even the main villains of either of Barnes’ novels. Rather, they seem to represent chaotic, completely random evil, seemingly devoid of agenda besides malice and mayhem, and all but completely unconnected to any other plots in either novel. They cross paths with other plots but always remain alone–separate.

The Prefects represent the best of both The Somnambulist and The Domino Men, even though, in a way that does not seem fully fair to the novels, as the Prefects exist on a completely different plane. The Somnambulist and The Domino Men are both beautifully composed pastiches of classic genre tropes. The Somnambulist is an homage to the Victorian penny dreadful, with shades of Arthur Conan Doyle, Charles Dickens, and others. The Domino Men is Lovecraftian in nature. While both are meticulous literary exercises, The Domino Men holds together more soundly, structurally speaking. The Somnambulist contains dozens of brilliant conceits, few of which coalesce into a fully coherent narrative by the end. In some ways, this lack of complete resolution and this lack of all threads being tied up is an aspect of the homage. The penny dreadfuls, after all, were more about shocking plot twists than logic. In this regard, The Somnambulist succeeds. It is filled with dazzling imagery and clever conceits and sets its scene and tone beautifully. But if one is hoping for each mystery to be answered and for each plot point to be resolved, this book will disappoint. It is about mood and tone and crazy, Raymond-Chandler-by-way-of-James-Bond plot machinations that are deliberately convoluted and virtually unconnectable.

The Domino Men, on the other hand, leaves not a single thread dangling. Every one, down to the tiniest stitch, reveals itself to be part of the novel’s overall mystery and grand design by the final page. It is also the more entertaining of the two. While both exhibit a dark sense of humor, The Domino Men is such a finely tuned machine that one often finds oneself laughing and shuddering at the same time. It rides the razor’s edge of being genuinely funny and genuinely creepy. Never is this more apparent than in the novel’s parallel narrative, which unveils a secret history of the House of Windsor, in which we learn how Queen Victoria made a rather literal deal with a Devil to secure her family’s position for all time, a deal which thematically parallels that which other characters make with the Prefects. The nature of said deal is where Lovecraft comes in, but when the climax actually arrives, it is, quite ingeniously, not quite what one would expect from the building tension. The answer is kind of hilarious, silly even, but also deeply disturbing. It comes out of left-field while also making complete sense with what we learned earlier in the novel. 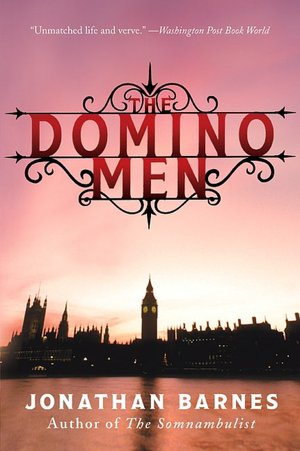 Another aspect of both novels that must be mentioned is the ingenuity with which Barnes narrates his books. In each, he plays with the concept of the unreliable narrator. Each follows a similar trick of not revealing the identity of the narrator until late in the proceedings, at which point said revelation makes us question everything we learned beforehand. The second complicates things even further by having two narrators, each one claiming that he is telling the truth and that the other one is fabricating events from whole cloth. In the first novel, the author even admits that at times, he isn’t telling the whole truth. We, as readers, are left to work out for ourselves what is really going on, another reason why it is clear that the fragmented, at times ambiguous nature of The Somnambulist is deliberate. For example, there is a character in the book who is called The Somnambulist, but this character is not necessarily the somnambulist of which the title speaks. At the same time, The Domino Men may not necessarily be the domino men of the second book’s title. There are numerous other characters in the book (male and female) who ashes, ashes, all fall down. Ironically, the Domino Men never do.

The Somnambulist and The Domino Men both tell stories of the near-annihilation of London. The Somnambulist is a work of magical realism, a book which keeps its fantastical elements in check for the majority of its pages, a sort of exaggerated verisimilitude. The Domino Men is an all-out fantasy-horror epic. The Somnambulist always keeps its characters, even its protagonists, at a distance. The Domino Men takes you closely inside the head of its first narrator, sometimes uncomfortably so. You can read either one without the other, but The Domino Men does benefit from having read the first, not only because of its shared characters but because of tiny in-jokes and easter eggs scattered throughout which link the two novels. Rarely, however, does one see two novels that are ostensibly in the same series but which are such different beasts.

The only elements the two truly have in common are Hawker and Boon, the agents of destruction and bloody vengeance who, if Barnes is to be believed, have been haunting London since the days of King Lud, if not since the Dawn of Time, dancing their merry dance of mayhem and slaughter.