We at Dreampunk were deeply saddened yesterday to hear of the passing of one of our favorite authors, Maurice Sendak. Mr. Sendak had the exceedingly rare ability to truly understand the way that children experience the world, as well as the exceedingly rare gift of being able to convey that, simply and powerfully, through words and artwork that spoke directly to children. He was able to do this because he never condescended to them. He never spoon-fed them homilies or attempted to shield them from the world’s harsh realities. His stories weren’t “nice.” They tapped into the wonder, beauty, and awe of life but also grappled with its darkness, head-on. What child who grew up in the past fifty years wasn’t influenced by Where the Wild Things Are?, in which the stuff of nightmares becomes an outlet for a frustrated young boy to act out upon and ultimately resolve his anxiety and aggression? Who couldn’t relate–at least sometimes–to Max’s misbehavior, Pierre‘s stubbornness, or Really Rosie‘s aspirations for fame? Who captured the fantasies and dreams of youth, in all of their dazzling joy and primal horror better than Mr. Sendak? The following is a tribute to the man who shaped all of our childhoods and, by extension, our adulthoods, as well…

Maurice Sendak in His Own Words…

"In the Night Kitchen"

“Kids don’t know about best sellers. They go for what they enjoy. They aren’t star chasers and they don’t suck up. It’s why I like them.”

“[Children] have written to me. They trust me in a way, I daresay, possibly more than they trust their parents. I’m not going to bullshit them. I’m just not. And if they don’t like what they hear, that’s tough bananas.”

“Children are willing to expose themselves to experiences. We aren’t. Grownups always say they protect their children, but they’re really protecting themselves. Besides, you can’t protect children. They know everything.”

“I refuse to lie to children. I refuse to cater to the bullshit of innocence.” 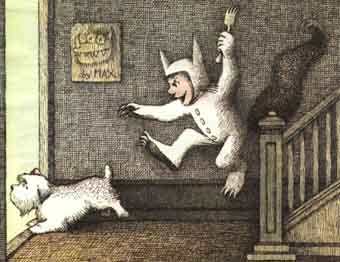 Max in his wolf suit

“I think it is unnatural to think that there is such a thing as a blue-sky, white-clouded happy childhood for anybody. Childhood is a very, very tricky business of surviving it. Because if one thing goes wrong or anything goes wrong, and usually something goes wrong, then you are compromised as a human being. You’re going to trip over that for a good part of your life.”

“Children are tough, though we tend to think of them as fragile. They have to be tough. Childhood is not easy. We sentimentalize children, but they know what’s real and what’s not. They understand metaphor and symbol. If children are different from us, they are more spontaneous. Grown-up lives have become overlaid with dross.”

“. . .from their earliest years children live on familiar terms with disrupting emotions, fear and anxiety are an intrinsic part of their everyday lives, they continually cope with frustrations as best they can. And it is through fantasy that children achieve catharsis. It is the best means they have for taming Wild Things.” 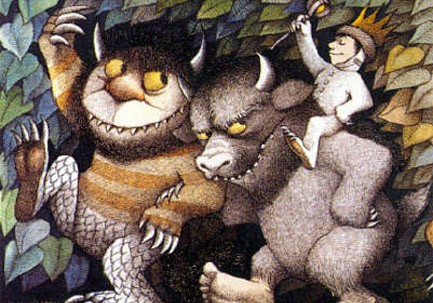 “I believe there is no part of our lives, our adult as well as child life, when we’re not fantasizing, but we prefer to relegate fantasy to children, as though it were some tomfoolery only fit for the immature minds of the young. Children do live in fantasy and reality; they move back and forth very easily in a way we no longer remember how to do.”

“There is no such thing as fantasy unrelated to reality.”

“Once a little boy sent me a charming card with a little drawing on it. I loved it. I answer all my children’s letters — sometimes very hastily — but this one I lingered over. I sent him a card and I drew a picture of a Wild Thing on it. I wrote, “Dear Jim: I loved your card.” Then I got a letter back from his mother and she said, “Jim loved your card so much he ate it.” That to me was one of the highest compliments I’ve ever received. He didn’t care that it was an original Maurice Sendak drawing or anything. He saw it, he loved it, he ate it.”

“A woman came up to me the other day and said, ‘You’re the kiddie-book man!’ I wanted to kill her.”