John Boorman’s Excalibur, the second “Legends and Mythology” entry in our 1980s Fantasy Film Festival, is easily the most ambitious film in this series to date, its goal having been to adapt Thomas Malory’s classic book of King Arthur, Le Morte D’Arthur–the first major work to compile all of the pieces of the Arthurian Legend up to that point, 1485, into one place–into one film. Malory’s book is absolutely massive, containing practically hundreds of stories, some revolving around Arthur himself, some about his wife, Guinevere, and best friend, Lancelot’s, doomed love affair, and most about the (repetitive) exploits of his many other Knights of the Round Table. It isn’t structured as a novel today generally is, not having a strong central focus nor any introspective character work, and is more of a collection of short stories about various knightly adventures, sans any modern sense of human psychology.

And so Excalibur clearly had its work cut out for it, in trying to tell anything resembling a cohesive story from it in only 2 hours and 20 minutes. Does it succeed in its noble quest? No, of course not. Le Morte D’Arthur is simply too sprawling to be abridged to such a short length, and further, resists any attempt that might be made to flesh out any of the characters because there’s simply no time. To have given Arthur, Guinevere, and Lancelot better character development would have meant sacrificing more elements of the legend, and yet without it, there is nothing to inspire anyone not already steeped in Arthurian lore to care. It’s also so overstuffed with plot points and allusions that it has no time to actually delve into that it’s also likely all but incomprehensible to Arthurian newbies, to boot.

I was a huge fan of King Arthur when I was 13 or so and read every single book on the subject that I could get my hands on, so when I first saw the film back then, I adored it, because there was no other Arthurian film that featured so many references. Hell, it covers the entire span of Arthur’s life from before conception all the way to his death. We have Uther’s rape of Arthur’s mother, Igraine, under the magical guise of her then-husband, the Duke of Cornwall… 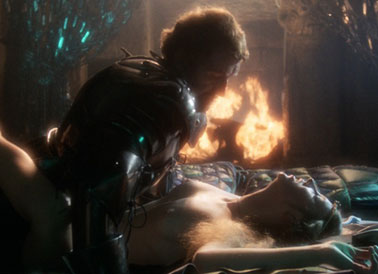 We have Merlin giving the baby Arthur to Sir Ector. We have the Sword in the Stone. We have the Lady in the Lake. We have the founding of the Round Table order and the creation of Camelot. We have Lancelot and Guinevere’s affair. We have Sir Gawain. We have Sir Percivale. We have the quest for the Grail. We have Morgan Le Fay (here called Morgana–a conflation of three sisters in the original story, as well as the sorceress, Nimue) and Mordred, and Merlin being trapped in an ice cave. We have Arthur, seemingly slain at Mordred’s hands, being taken on a boat to Avalon. And so much more. To a 13-year-old King Arthur geek, this is amazing.

The Sword in the Stone

To anyone else, it’s a plotless mess, with events happening, one after the other, for no explicable reason, and characters becoming prominent and then seeming to randomly fade into obscurity with no rhyme or reason. It’s the Cliffs Notes version of Le Morte D’Arthur. Arthur meets Lancelot, and practically within moments of screentime, Lancelot’s met and fallen for Guinevere, the Round Table is officially founded, and years have passed, with Lancelot mostly avoiding court so as to stay away from Guinevere. Then, they are accused. And not shortly after, they finally have sex, Arthur catches them, and they both disappear from the film until we much later learn that Guinevere has retired to a nunnery all those years ago and Lancelot seems to have wandered around, mad and homeless. The story is so compressed as to lose all meaning. Although we are told that Arthur and Lancelot were great friends, we are never given a chance to see it. Although we are told that Lancelot and Guinevere have this passion for each other, it only really manifests in the one scene where they finally do it. In the original story, this plot was meant to play out over years and years, and while Lancelot temporarily going mad and Guinevere going to a nunnery do happen, they are at different times and in a different order.

The film gives no time for us to actually see Camelot and the Knights of the Round Table in their prime before it’s begun dismantling them and setting the stage for Mordred’s rebellion against his father. And, as a character, Arthur is entirely opaque. We never come to know him as a person, and he barely makes an impression on the viewer. As Merlin, the great Nicol Williamson does, but he isn’t the film’s protagonist per se, either, and is mostly missing from the last hour. There is no real protagonist, other than perhaps the sword itself? But the sword is missing for about 20 years of story time, ensconced with Guinevere at the convent.  Excalibur simply tries to do too much for a single film. It is shapeless and esoteric. 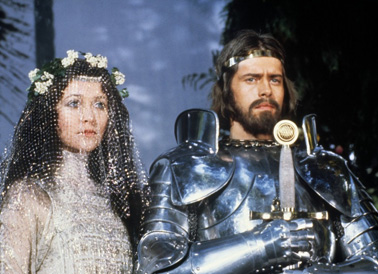 With all of that said and despite its many flaws, however, it’s still a deeply intriguing, even mesmerizing film that is arguably just as intriguing for its imperfections, if not more so, than had it been more coherent.