Thankfully, the real stars of the film are the legendary Ray Harryhausen’s creature effects, most of which are still awe-inspiring today. There are no two ways about it: the monsters are still terrifying, particularly Medusa, whose eyes look unnervingly real. 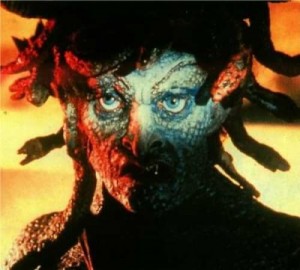 Additionally, the decision to not only give her hair made of snakes but to transform her fully into a green, scaly snake creature was truly inspired. The Perseus vs. Medusa sequence is easily the best in the film, managing to be so suspenseful and nailbitingly tense that it was the only time I really completely let myself go the entire time and stopped being as aware of the film mechanics–particularly impressive, given it is so stop-motion-centric.

The Kraken is also awesomely scary (although I did have to laugh at how casually Olivier says, “Release the Kraken,” given how overblown and earthshattery Liam Neeson’s line reading was in the trailers for the remake): 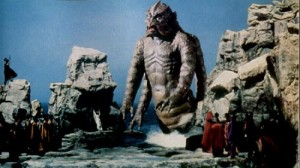 …as is the demented, deformed satyr, Calibos: 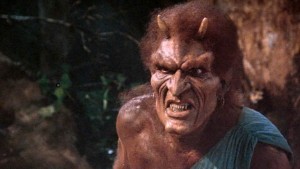 And since this site did originally spring from steampunk, how could I not love the sentient golden, mechanical, clockwork owl? And just the fact that, when Zeus orders Athena to give his son her cherished owl, she characteristically thinks her way out of the situation by getting Hephaestus to make a replica? I also love that his hoots and whistles sound exactly like R2D2. Personality-wise, as well, he is basically what Artoo would be like if he were a robot bird instead of a rolling trashcan. He also has my respect and admiration for totally rocking a Liza Minnelli hairstyle: 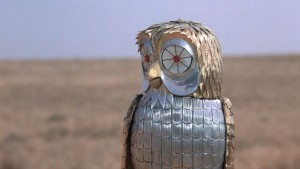 (Although his name, Bubo, is a bit unfortunate. I would have gone with Archimedes.)

My favorite moment in the entire film, though, was probably this exchange between Thetis and the other goddesses:

Thetis: So many women, and all these transformations and disguises he invents in order to seduce them. Sometimes a shower of gold, sometimes a bull or a swan. Why, once he even tried to ravish me disguised as a cuttlefish.

Hera: Did he succeed?

Athena: What did you do?

Thetis: Beat him at his own game. I simply turned myself into a shark. 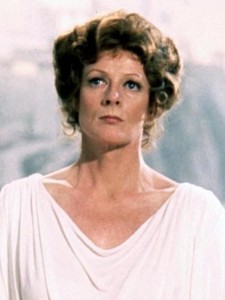