So far, in our 1980s Fantasy Film Festival, we have watched three deeply silly films, Conan the Barbarian, Hawk the Slayer, and The Beastmaster, all of which are exploitative and ludicrous, and the latter two of which are quite entertaining, to varying degrees. And that’s why it feels nice to finish off the “Sword and Sorcery” sequence of the festival with Ladyhawke, the first that is actually an honest-to-goodness excellent film. It’s also the first I’d seen before, although it had been many years and I had only barely remembered it. 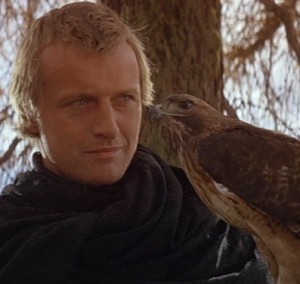 Directed by Richard Donner, perhaps best known for Superman, The Goonies, and the Lethal Weapon series, it looks absolutely stunning, even today, with gorgeous views of the Italian countryside (standing in for medieval France) and the interiors and exteriors of ancient castles, one ruined, the other still awe-inspiring and palatial. Donner knows how to film a scene, how to frame a shot, and how to use color to make the visual palette aesthetically pop. I mention this mainly because his directorial talent really stands out when compared to the previous three entries.

What stands out even more is the film’s masterful blend of tones, balancing a sincere, even at times heartbreaking, blissful, and swoonworthy fairy tale of love lost and eventually regained with a comedic edge that perfectly plays off of the drama in a manner that manages to simultaneously both undercut and enhance it. In many ways, it is a forerunner to The Princess Bride, which came out only two years later. It doesn’t have the full-on postmodern, deconstructionist storytelling meta of that film, nor does it utilize nearly as many fairy tale tropes, but it similarly demonstrates how a fantasy can be genuinely transporting and humorous at the same time–and, indeed, how deliberately encouraging our laughter through funny juxtapositions of the mundane and the mythic can also ironically help us then be that much more willing to embrace the latter without irony. It also is similarly restrained in the magic and special effects departments, using only a single element of the former and practically none of the latter in telling its story (The Princess Bride only really had the chocolate resurrection egg and arguably Count Rugen’s “Machine” for the former, and the R.O.U.S. for the latter).

The key to the film’s success is that it begins not with Rutger Hauer as Etienne Navarre, the hero of our tale, nor with his lady love, Isabeau d’Anjou, played by a young Michelle Pfeiffer. Instead, we actually open on a pre-Ferris Bueller Matthew Broderick–casting that proves to be as inspired as it is surprising–as the comic relief character, Philippe Gaston, a wily thief known as “the Mouse” for his ability to squeeze into and out of extremely tight spaces in order to escape from impossible situations. The almost disarmingly likable and in-spite-of-himself sweet Mouse spends a lot of time monologuing to himself and to God. In the wonderful opening sequence in which he escapes the dungeons of Aquila, he promises God that he will never steal again if He allows him to escape, a promise that he breaks less than a minute after getting out, telling God, “I…know that you know what a weak-willed person I am.” 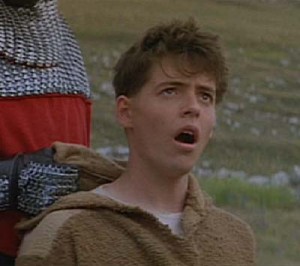 Speaking of which, the cleverness of the dialogue is another feature that you really notice after the first three films, all of which can at times be lovably dumb but none of which demonstrate the true wit and intelligence of this film.